Jose Lerma’s work relies on a compendium of mediums, references, and elements that combine his personal history and his extensive academic accolades to his awareness of social history. The artist originally migrated from Spain to Puerto Rico and now lives between Chicago and Brooklyn, and has multiple degrees in law and art. It is his ability to combine and collapse facets of history that is best presented in his works now on view in ‘I am sorry. I am Perry’ at Andrea Rosen. 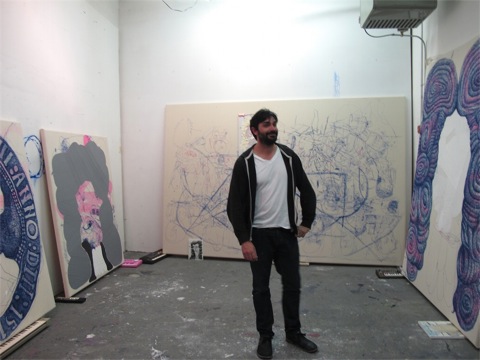 In his paintings, Lerma makes a trend of using images of Baroque style portraits of historical, famous French Bankers from the 18th Century, which are signified by the wigged portraits in some his studio pieces. He started drawing the characters over and over after shooting photographs of them while in law school. The pieces for this exhibition are monumental, somewhat decadent in liberal use of strokes, doodles and highlights of paint. The pastel colors add a lightness to the pieces that works well with the harshness of the profiles of these historically brutal, old bankers. 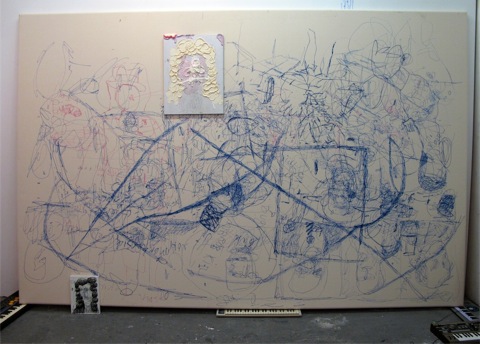 Lerma places his large works on electronic keyboards as a way of combining previous elements of his oeuvre and collapsing the work together. In a way, it is as if the paintings become active participants in the art. However, beyond this, there is no added meaning to the pianos, a fact stressed with the daily changing of the musical tones the pianos play.

Through the use of acrylic spray paint on canvas, he is able to reproduce the aesthetic of highlighters and pen scratchings on a paper pad in his monumental paintings. He uses this doodling as reference to boredom by taking the tiny gesture of a repetitious action and blowing it up, as evident in the droning electronic keyboard noise and the somewhat tortuous doodling. 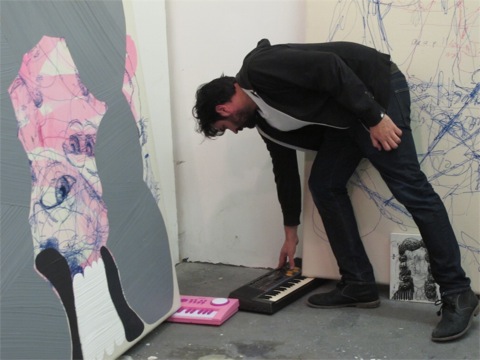 Lerma’s paintings meld these several diverse mediums to create works that resemble portraits of bureaucratic figures from afar, but seem to be topographical landscapes from a closer distance. He has a way of building up hues of paint and juxtaposing them alongside flat planes of white paint or doodles of spray paint. There is no justifiable pattern to this intersection of textures and it is this free use that makes Lerma’s paintings experimental. 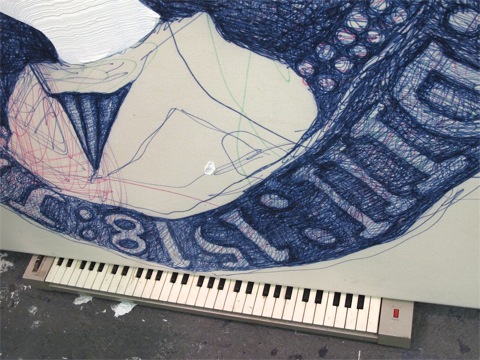 Another aspect of his work is his ability to combine historical references without over-replicating them, for instance his swirled scribbles are reminiscent of graffiti, especially since the artist uses acrylic spray paint to create these large scale doodles. By distorting and often erasing the features of the faces, only leaving profiles or frontal views of wigs, Lerma’s work also references the paintings of Francis Bacon. This style has also been attributed to Philip Guston due not only to the distortion of figures, but to the use of pastel colors and the sketch-like quality of the drawings.

The hypnotic musical tones of the electronic keyboard and the meditative swirls of the doodles seem to counterbalance the stiff regulations of the wigged French bankers and the very controlled atmosphere of both the four-sides of the canvas and the white-walls of the gallery. Nonetheless, the reason for the accumulation of so many elements is never clearly elucidated by Lerma. This combination of elements does not deter both viewer and critic from enjoying works that Lerma effectively describes as “paintings and works about paintings, which attempt to collapse the historical and the autobiographical within a single frame”.