The premise is whimsical: a city transforms itself (its time, its motion, its color, its sound) into an open, exploratory ground. On January 29, Berlin hosted its 28th Lange Nacht der Museen, entitled “Body Meets Soul.” Twice a year, the city turns into five paths, thus linking more than seventy distinct spaces: historical collections are tied to city halls, museums to factories, zoos to libraries. 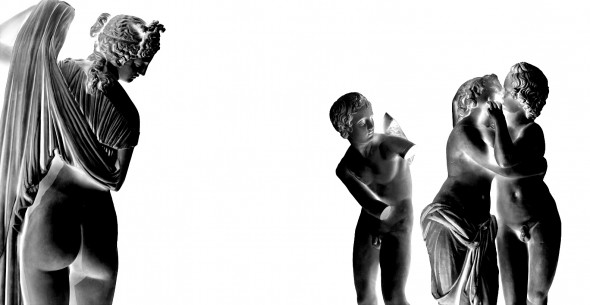 We began at MACHmit! Museum für Kinder, in Prenzlauerberg. The address for MACHmit! is an old church and, save for the sign outside, it’s difficult to see that there’s an alternative world behind that 19th century brick facade. Instead of bells, there was laughter and the sound of excited footsteps running above us. Instead of the immense, vertical space that a church normally creates, we entered under a low ceiling that turned out to be the underbelly of the museum’s two climbing towers. Most of MACHmit!’s activites are lifted two stories above the street, where dozens of children were painting, molding clay, or climbing through this vertical labyrinth that faces the windows of the old church. We joined the children in the tower of mazes and halls of mirrors, crawling and running towards the unknown, until we ended up on the shuttle bus towards the center of the city.

The Route 1 shuttle bus was full of other wanderers moving south into Friedrichshain, to Café Sibylle for a small exhibition entitled, “Architecture and History of Stalinallee/Karl-Marx-Allee” and then to the Akadmie der Künste at Pariser Platz for the Sigmar Polke retrospective. Polke passed away last year and the AdK’s exhibition encompassed work from nearly every period in his diverse artistic career. The ground floor gallery was filled with his sketches, collages, paintings, photographs and prints, vividly mapping his critical methods of responding to the way he interpreted the world. The AdK building is also a collage and reflection of the many past and present conditions of the Pariser Platz site. The space is deliberately chaotic: visitors are drawn towards the central, expressive stair, then twisted up through walls, columns and planes of windows of varying materials, colors and geometries. The relief comes when we stepped outside on the top-floor terrace and took in the calm of the Tiergarten, the Gate, and the movement of people and buses in the Platz below.

All the shuttle buses converge at the center of Lange Nacht, Kulturforum, which presents a number of interesting urban questions. Despite its density of cultural spaces, continuous choreography of exciting events and dynamic architecture, circulation in and around this center is awkward at best and remains essentially cut off from the urban energy of Berlin. However, funneling the entire city to this spot twice a year changes the conditions of Kulturforum dramatically. On a normal day, the crowd is rarely a present figure: any formidable group disappears into the music halls of the Philharmonie, the reading rooms of the Staatsbibliothek or the galleries within the many scattered museums. But that night, in subzero weather, throngs of Berliners and visitors filled the plazas and streets in Kultuforum, enlivening it in a way that I had not seen before.

We cut between the Philharmonie and the Musikinstrumenten-Museum towards the Kulturforum Kunstbibliothek and Gemäldegalerie, which were bathed in a bright blue light. The plaza ground was a projection plane for the light installation, “WORDSPA ausquellungen,” by the light artist, choreographer and curator, Andrea Hilger. 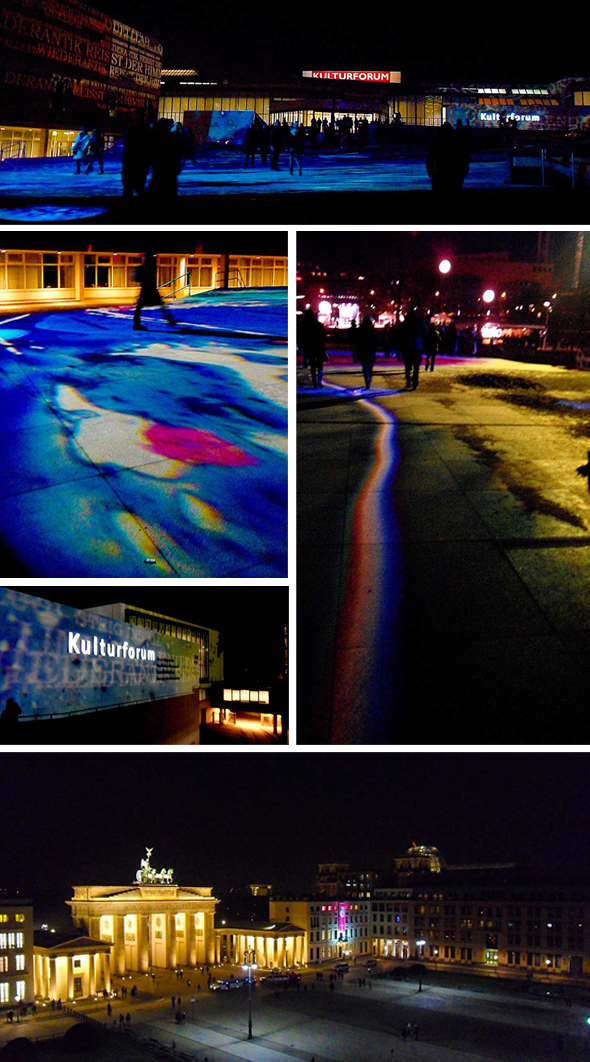 Inside, we wandered through the Kunstbibliothek’s exhibition of the Grand Paris architecture and urban planning competition, “Grand Paris in Berlin. Die Zukunft unserer Metropolen.” Considering that the show aimed to emphasize the importance of the future of our cities, it was curious how little space was given for the exhibited projects. The atrium spaces were practically unaltered, which allowed for a very open and celebratory atmosphere, but in doing so, the exhibition was limited to posters tethered to the Kulturforum’s columns, reducing the drawings to a mere symbol of the greater ideas they were aiming to show. What was truly phenomenal was the Gemäldegalerie’s collection, in particular the “Hommage an Caravaggio.” Additionally, the gallery hosted a drawing workshop in the central entrance hall and a series of talks and tours until 23:30, where a whole range of speakers (from students to art historians) discussed their views on particular Caravaggio masterpieces.

From hundreds of compelling artworks, we wandered down to one. Across the plaza, the Neue Nationalgalerie was exhibiting Marcel Duchamp’s Belle Haleine Eau de Voilette perfume bottle at the end of it’s short, 72-hour, display. The windows of Neue had their curtains drawn, thus obscuring the events inside to blurred shadows and creating an odd curiosity for the visitors who had not yet seen what was on view. Considering the vastness of Mies’s plaza ground, the bottle seems incredibly distant from the entrance, standing alone, at eye level and in glass case that was built to mimic exactly the case that houses Nefertiti in the Neues Museum (museum name pun, I’m sure, intentional). 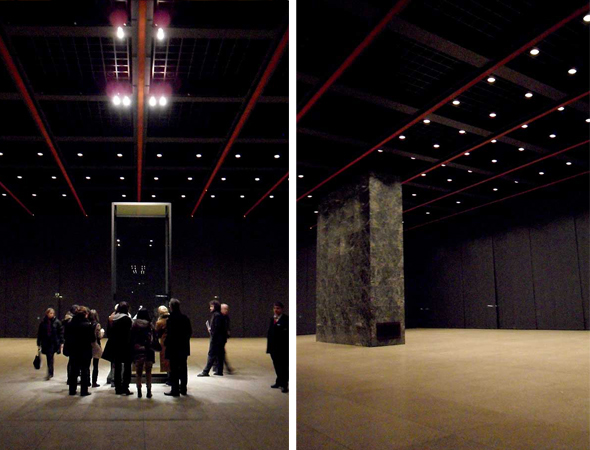 The austerity of the Neue provided a quiet moment before continuing on to our final destination, across the city with only an hour left. Getting on the Route 3 shuttle, it was difficult to believe that it was almost 1:00 AM in the morning. It was more like rush hour, but instead of going to the bar for a post-work drink, we were all heading to the Aquarium to finish the evening properly by sneaking a peak of the eels, sharks and jellies. 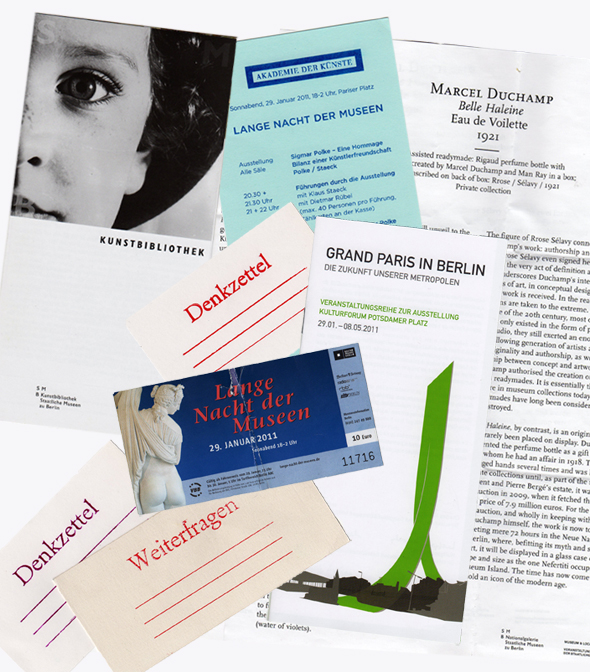 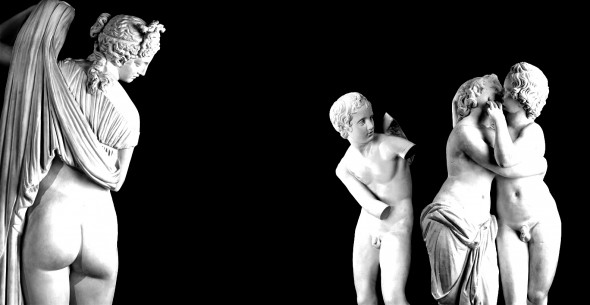 The key image of Lange Nachts past have always come from one of the collections that participate in the event, and offer a quick glimpse into what that Lange Nacht aims to give the city. It’s quite clear then why the 28th Lange Nacht chose Eros watching the love between Amor and Psyche, or Aphrodite lifting her dress, to represent itself. This one night, when body was to meet soul, the city was exposed so that we could wander more freely, do more at once than perhaps we had done all winter and see more of Berlin that we could have expected.