Nicky Broekhuysen crunches numbers and societal conventions. Using the language of binary code, she meticulously stamps out new patterns and formations of 1 and 0 to signify the set systems and codes of contemporary culture. Her whimsically complex drawings leave sharp visual imprints, as the stamp formations represent familiar, even when abstract, symbols, icons, and objects. Probing the ‘systems of human existence’, Broekhuysen aims to question institutions of religion, gender, sexuality, time, and political systems. 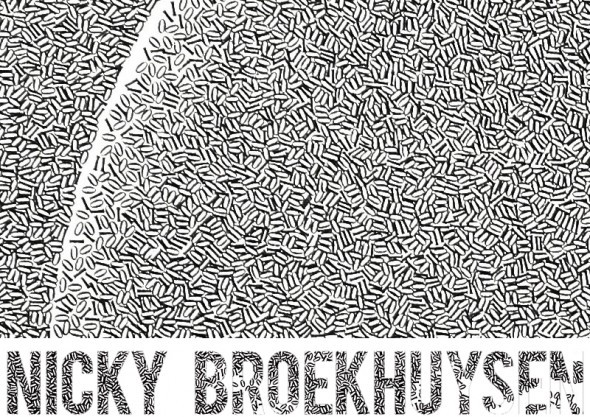 Originally from South Africa, she studied Fine Arts at the University of Auckland in New Zealand before moving to Shanghai in 2006. Broekhuysen currently lives and works in Berlin, where her work will be exhibited by pool gallery, as a solo artist at the VOLTA Art Fair New York 2011, followed by Between States, Into Light in Berlin; March 12–April 23, 2011. Before heading off to New York, Broekhuysen met with Berlin Art Link to discuss her work, process, and upcoming projects. 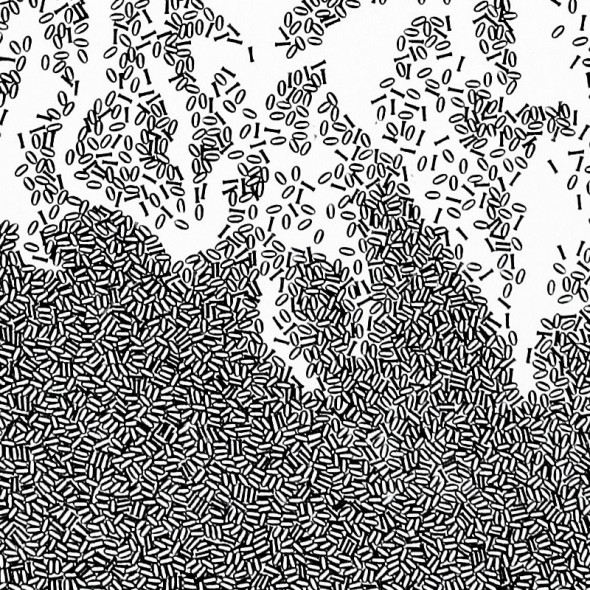 Having read about your background, it makes sense that your work often references patterns of migration, movement, flux and flow. Has your multi-national upbringing provided a basis for your artistic exploration?

Nicky Broekhuysen: Yes, I think it definitely has influenced my ideas as an artist. Like you say, I have moved around and lived in many different places and I feel that this has meant that I myself have had to become flexible and open to change. I also think that it has created a way of thinking that is a bit more ‘definitionless’, that is to say that the edges of my thoughts and beliefs have softened. I guess moving around has taught me to see the similarities in cultures and ideas rather than the differences. I think that this movement from place to place stems from a personal desire to create flux in my life thus creating the opportunity to continually evolve my perspectives.

How has living in Shanghai influenced your development as an artist?

NB: Shanghai was extremely important in my development. It gave me two-and-a-half years to fully focus on my work, to identify my voice as an artist and to find my medium. I was very influenced by the Chinese culture and Traditional Chinese paintings. I realized that the potency of an image lies in its simplicity. The fact that I can create complex images out of just a simple 1 and 0 in black ink on white paper I find to be endlessly fascinating. Living in Shanghai and being a part of the Chinese culture also helped reinforce the idea that political systems are not just black and white and that our opinions are often formed from the perspective from which we view it. 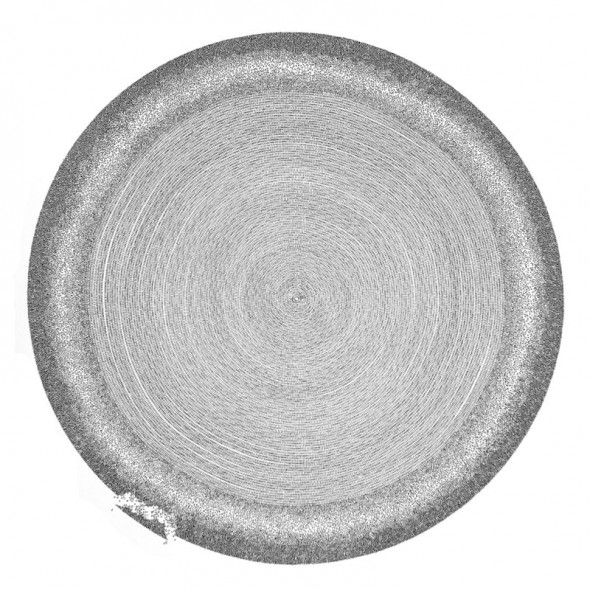 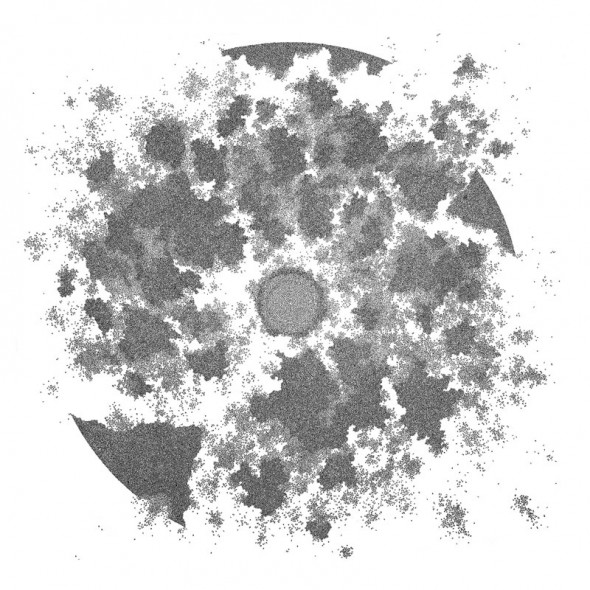 When did you come to Berlin, and what prompted this decision?

NB: I came to Berlin in August 2008. Ever since university, when I had studied German photography, I had wanted to spend some time in Berlin. I guess the move was prompted in the end because I realized that it was time for a change and Berlin seemed like a great launching pad with in the European art scene.

Have you always worked in printing, or what mediums have you gravitated to through your artistic development?

NB: I wouldn’t say that I am a ‘printer’ in fact I have only been working with stamps since starting with my Binary work in early 2008. I studied photography at university but have spent my life painting and drawing as well. I think I am more attracted to the idea first and then whatever medium best conveys this idea is the one that attracts me. I must say though that photography has definitely played a huge role, as it taught me how to view the world and find meaning in the simplicity of a single image.

How did you first become interested in using the stamp and as a method to create your work?

NB: I was working on an exhibition of light boxes called Categorizing The Lost Pieces. The show was about categorizing personal thoughts, fears and experiences. I started thinking about how I could ‘order’ this ‘chaos’ into something more understandable so I thought of a library and all the books inside. They are all ordered into categories and ‘sense’ is created. So I stated using an old library due date stamp and turning all the numbers into 1’s and 0’s. Through these numbers, I created figures and characters that were able to tell the stories of these thoughts and fears through the light boxes. Anyway to cut a long story short, after the show I had this realization that in fact the characters were binary numbers! I didn’t need to be figurative or depict reality, all the meaning lay in just the 1’s and 0’s. Since then I have only created art out of just 1 and 0.

NB: The process is extremely slow as you can imagine, as I like to work quite big and every number is of course hand stamped. I usually start with an idea that I am trying to express. More often or not this idea is somehow juxtaposed against a scientific or natural phenomenon, law or system. It is through this aspect where my image usually originates from. These ideas usually are initiated through things that I am thinking about, reading or are happening in the world. It is a very fluid and intuitive process that seems to develop and clarify as the work progresses. 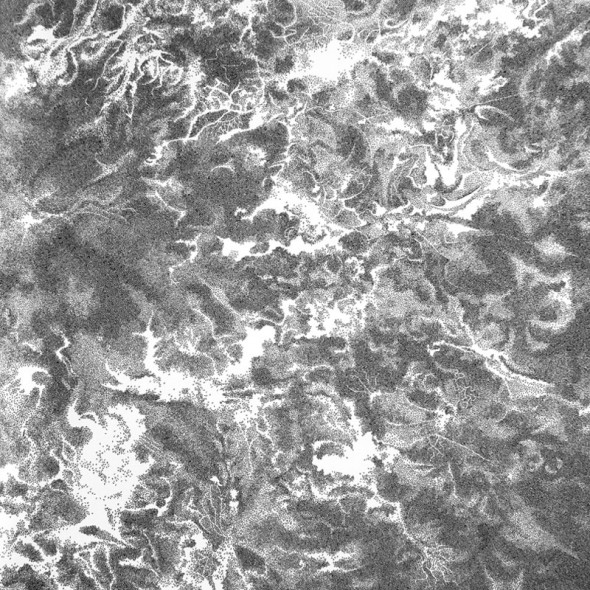 In your own words, please describe your attraction to the balance between chaos and order.

NB: I am always attracted to paradoxes as I think meaning often lies in the hazy space, which exists between the two. I think life is a combination of chaos and order it is everywhere. Order is when life makes sense, when it is understandable and comfortable in it’s predictable sequence. Things are as they are, structured and reliable even if the meaning of the structure is restrictive. Chaos, on the other hand, is when these structures (or life) start to lose their meaning, they become confusing due to flux. However, for me this is the most exciting and exhilarating state as it is filled with endless potential of what can come next. Chaos is a state of potential. And it is this shift back and forth, between order and chaos, which fascinates me.

Do you deliberately address this concept or do you find it resurfaces through a more intuitive process?

NB: It is an intuitive process for sure. It is something that I am unconsciously drawn to. However, by choosing to work with binary numbers the way I do, I will always have chaos and order as part of my dialogue. 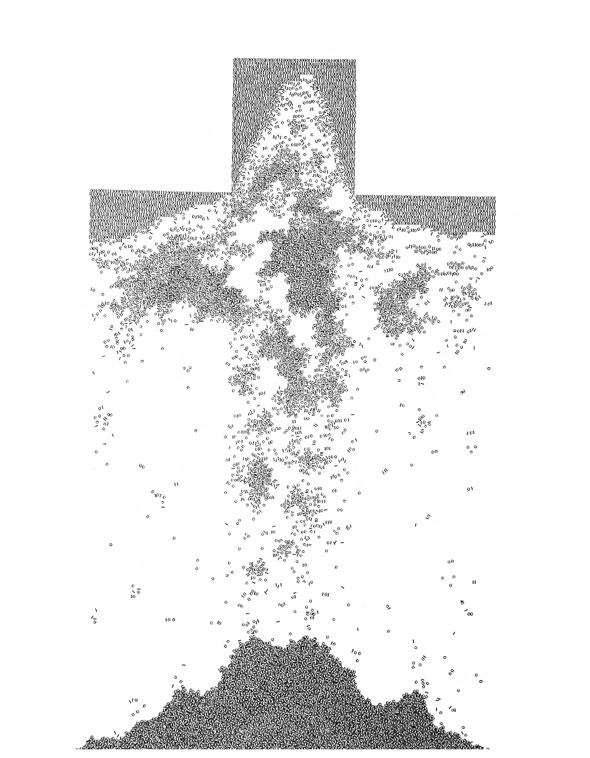 Your work formally adapts the binary code and synthesizes it into a new mode of visual representation; by clustering or massing, groupings of 1’s and 0’s together as imprints on the page. However, you have adapted an entirely analogue method of working, as these digits are meticulously stamped by hand. Would you consider using digital media to create your artwork irrelevant or contradictory to your aim?

NB: Yes, it is an entirely analogue method of working. Again this is a paradox, which I love, the fact that I use a digital ‘language’ in an obsessively analogue way. It raises interesting questions and new perceptions not only about how we communicate digitally but also how we did it in past. I feel that this analogue way of working is what makes the work different and unique. I am not interested in digitally producing my work they are like ‘abstract paintings’. I love the process, the time it takes, the fluid and spontaneous qualities. I like the viewers to feel the time that it takes and the impression of the artist imbedded in the ink.

What projects are you currently working on?

NB: I am just beginning a new project again with binary numbers. I see the binary numbers as thoughts, ideas and concepts, the ‘consciousness’ of life. So, I recently got an MRI brain scan of my brain and am going to using these images as a starting point for a new series looking at the idea of consciousness and the formation of beliefs.