UDK Gestaltung Rundgang: New Media, New Art
“Our fine arts were developed, their types and uses were established in times very different from the present…we must expect great innovations to transform the entire technique of the arts, thereby affecting artistic invention itself and perhaps even bringing about an amazing change in our very notion of art.” Paul Valery, “The Conquest of Ubiquity”

Society has experienced unparalleled advances in the last ten years, advances of such enormity that their effect on every aspect of culture is still being actively measured, debated and explored. We are no doubt at a critical point where established standards traditions are constantly being re-evaluated. Perhaps in no way is this more readily apparent than in the convergence of art and new forms of media. Valery’s words seem eerily prescient as the dawning decade of the 21st century comes to a close. Today, a new generation that came of age during the dot com boom is constantly redrawing the traditional borders between modes of expression. This blurring of boundaries can be seen in action at the “Rundgang” of the Universität der Künste, Fakultät Gestaltung. Taking place annually, Rundgang is an opportunity for students to introduce their work to their peers as well as the general public. Located at the UdK Medienhaus in Schöneberg, the works exhibited showcase the multidisciplinary approach of the university. 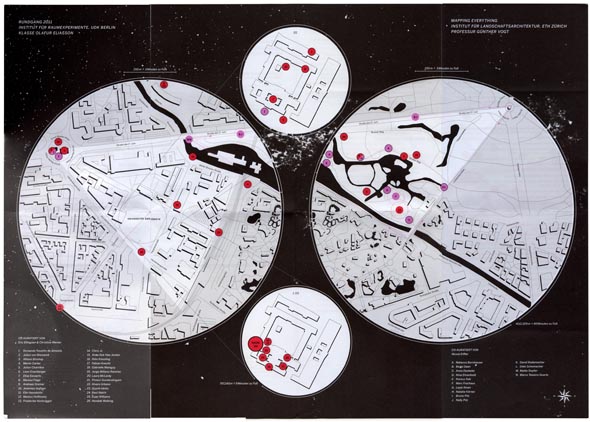 Here traditional print typography meets digital design, paper constructs are integrated into installations featuring perpetual motion machines, and philanthropic causes gain a platform through video games. Walking down one of the long corridors flanked by classrooms and lecture areas, transformed into ersatz exhibition spaces, the eye is drawn to the installation “Everything Flows”. The work of student Sandra Dick, the piece seems from a distance to be an aquarium home to a variety of tropical fish, but on closer examination is revealed to be an engineered environment, the “fish” nothing more than colored pieces of cellophane kept afloat by mechanical means. The small white plaque on the wall bears a quote from F.G. Junger discussing the “magic of evanescent motion” and the quality of grace. The motion of the components is so natural that from a distance it fools the eye; the synthetic becomes organic, motion becomes rhythm, color and texture become emphasis. 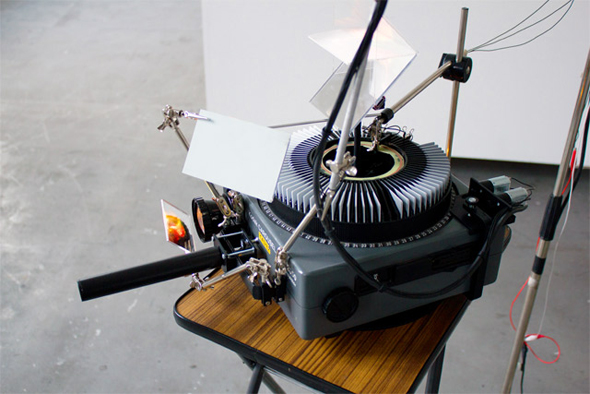 In an adjacent room, videos of students in Professor Joachim Sauter’s Advanced New Media class play on loop. Student Sebastian Schmieg explains how he achieved a hybrid between old and new technology with “81 Points of View”, an interactive sculpture. The installation uses a Kodak slide projector, a throwback which brings to mind foggy memories of sitting in a dark room watching blurry slides of a week spent in the Bahamas, circa 1974. The slides, however, show a computer-generated panorama, and the viewer can interact with the image through a rotating mechanism that shows 81 different angles of the panorama. Daniel Dalfovo discusses his work on “Charity City” in another video. Drawing on the principles of large-scale simulation games such as Sim City, the project is more than an eye pleasing distraction. With each click the player develops a virtual city, simultaneously making a donation to a variety of charities such as the Red Cross, Doctors Without Borders, and Greenpeace, among others. Building a school in the game equals making a donation to a real school, as Daniel puts it. Art as a vehicle for social change is a familiar phenomenon, but what could better illustrate the extent of the digitalization of culture than a scenario in which a virtual investment leads to tangible, real life dividends? Walking through the installations, the visitor is greeted by a wide array of sights and sounds, by art that harnesses new technologies and reinterprets old ones. One can’t help thinking of Valery’s ‘amazing change in our very notion of art’ when seeing this remarkable symbiosis between art and changing media.

Top Picks: Taking the Rounds of Rundgang at the UdK
The effect of the Rundgang UdK is largely underwhelming and exorbitant (ditto the works at Veilchen in Weissensee’s Uferhallen, curated by Valérie Favre and Werner Liebmann); however I did find three shivery and sincere artists amid the mucky-muck: Mitya Churikov, Michaël Marchand, and Christoph Balzar.

Raum 84 was the most elegantly self-organized and featured a sweet little untitled video loop by Mitya Churikov. A tennis court that sits just askew in the frame of its monitor gives enough information to indicate origin but by not “finishing” the edge formally, i.e. by not completing the square, it de-animates and its content lies graphic and concrete. As the camera holds completely still, the only shift within the work comes from a crawling change of daylight on the court, creating a still-life portrait of a concrete line drawing, or a kind of a linear mood ring.

The next delicious surprise came from Michaël Marchand who could be the city’s art-darling if his moves are considered ripe enough, which is feasible, what with Berlin’s long-standing affection for trash aesthetics. Marchand’s video and photography works balance between a tight and clean presentation of formally absurdist gestures. In his short film are a series of collapsed moments occurring in the city sphere, for e.g., in one scene is a young man standing in a tight hallway holding in his upraised hands a dilapidated cabinet and balancing on what looks like a curved piece of particle board. Waiting, he peeks past the camera (likely to the director), bounces once or twice and the board below him snaps; he drops the cabinet, and falls to the floor. Stunning though it is, a possible weakness of this work is in its tightness; it might need that little bit of oxygen, like a peek at the director, to remind itself not to take itself too seriously.

Finally, out of the waters of the Institut für Kunst im Kontext rose the elegantly political work of Christoph Balzar. Utilizing institutional critique but moving forward with the rigor of a May Day activist, Balzar’s current project “Between Memories and Possibilities” makes way for western institutions and specifically the Museo del Oro of Bogota, Columbia to shift from antiseptic archive to engaged host. His work looks at the museum’s current collection of Tairona gold artifacts and the museum’s neglect of their sacral use and meaning as regards the Tairona’s living descendents. What he has set into motion is two-fold: the purchase and acquisition of further artifacts on the marketplace to be returned to descendents of the Taironas, the Kogi people; and a continued push for the Museo del Oro to allow Kogi priests and sacral practitioners access to the artifacts in order to perform rituals that would release them of their sacral meaning and repair some long-standing cultural damage.

Specifically, Balzar explained, these works are in fact living Gods who lay asleep in the museum, not be awakened until they are no longer in crisis and outside of their known context. With the help of a Kogi priest, Balzar was able to inspect one of the artifacts in a way that no ethnographer could, discovering that there is a small square hole on the backside of one of the Gods’ heads and when held up to the sun as it is intended, light pours through its mouth and it literally speaks to the priest in a language of sunshine. As for the artifacts already acquired by Balzar and his partner Hanune Shalati which are still in transition, they are sleeping and currently being nourished with cocoa leaves.

AND WHERE WE STOP, NOBODY KNOWS: Exploring the World of the Institut für Raumexperimente

While it is clear that modes of expression are fluctuating in response to and provocation of societal conditions, it is a curious question of how emerging artists choose to exhibit and engage within a larger context. The Institut für Raumexperimente, under the direction of Olafur Eliasson, curated a constellation of spatial experiences within the Rundgang of the Fakultät Bildende Kunst that sought to address this question.

While the “success” of those experiments can be debated, the constellation as an idea, an investigation and reactivation of the UdK’s body as a whole, and Room 110 at the Hardenbergstrasse Building as a concentration point, illuminated the importance of questioning the object, territory and the role of the institution in contemporary art. Room 110 acted definitively as a major node where the Institut enacted its group work. Within this construct, the students built a translation of a shelter, a kitchen, a field, and a wall, which consequentially served as a habitus for few of the students for the duration of Rundgang. Individual works were present, such as the looping videos of Clara Jo, but were legible as part of the alternative atmosphere that was trying to assert itself.

Within the UdK, the Institut exists semi-autonomously, with its studios located on the other side of Berlin, in Prenzlauer Berg, and with an alternative process. Much of the year has focused on excursions and external investigations that are brought back into the studio through collective discourse and testing. The act, then, of trying to coalesce this other ethos back into the UdK as a whole, became a pivotal spatial and artistic experiment unto itself. The Institut für Raumexperimente made its final excursion of the year into the university-body itself.

Daniel Thomas Berg studied theater and art history in New York. Originally from Brooklyn, he has traveled extensively and lived in four hemispheres. Having worked with various traveling experimental theater troupes, both as a performer and director, he has an avid interest in developing technologies and their implications for the arts. Daniel currently lives in Neukölln, Berlin.Melissa Steckbauer is a visual artist based in Berlin. Steckbauer studied art history at Utrecht University and fine arts at:the Hogeschool voor de Kunsten in Utrecht, the University of Wisconsin-Madison where she received her BFA, and The Santa Reparata School of Art (as a study abroad program through UW-Madison).
Elizabeth Feder is an architect and writer from New York City currently based in Berlin. She received her BArch from The Cooper Union for the Advancement of Science and Art and is completing a research project entitled, “Between Transience and Permanence: a New Reactivation of the Berlin Block” with the Deutscher Akademischer Austausch Dienst.