Article and Photographs by Elizabeth Feder

And it’s two meters into the gallery before you have to idle and choose.

Thin and gray stasis was a decent, if simplistic, immediate reading: I was walking along Hans W. Mende’s photo-documentary of the Berlin Wall, presumably on display now at Aedes Pfefferberg to reflect on the fiftieth anniversary of the erection of the Berlin Wall. With all the gravity of Mende’s photographic language, and subject, for that matter, I was surprised to see that 50 Years Since the Building of the Wall: Border Inspection – the 161 Kilometers of the Berlin Wall was relegated to the periphery of the Aedes space. But then again, Mende’s exploration here was one of edges, and the spaces that emerge around and within them. In an attempt to encourage commemoration through pause, the shallow translation of Mende’s photographs into a slide show is somewhat mollified through its placement in the arched, brick niche immediately to the left of the gallery entrance. The nook provides quietude for taking in the scope of Mende’s extensive endeavor to read the Wall as place, while also recreating that feeling of impressed loneliness that such a monumentally divisive act ultimately creates.

Exhibition view, 50 Years Since the Building of the Wall: Border Inspection – the 161 Kilometers of the Berlin Wall. A photo-documentary by Hans. W. Mende.

And when quietude reaches a limit, you can turn right around into the excitingly dense exhibition exploring the role of cinema and cinema space in the 21st century city. Cinema of the Future: Cinema and Urban Public Space confronts the potentials of this cinematic-architectural question through an “urbanistic, societal and design” lens. But while many architecture exhibitions/workshops/lecture-series/what-have-you’s take on an individual program, site, or material from a singular point of view, the multi-faceted approach to the question of the contemporary art house cinema supports a richness of possibility.

The totality of the exhibition comes from four different places: the Aedes Network Campus Berlin (ANCB) Art House Cinema as Kiez Stimulator workshop with The Why Factory at the TU Delft; the new design for the ZooPalast in Berlin; the ANCB summary workshop, “Cinema as Urban Space,” held at the University of Applied Arts in Vienna last winter; and the research collected by Medienboard Berlin-Brandenburg. The focus then, at least when trying to coalesce these very different facets into a singular idea, is less about rethinking the art house cinema as a potentiality of program, but of seeking a critical spatial flexibility within a local urban context.

Take, for instance, the pivot-point of the exhibition. The results of The Art House as Kiez Stimulator workshop stand as a column built from six separately suspended screens, which float above a red round table outfitted with six computers, which then stand in the center of a red round text lacquered on the floor. It’s a nice nonlinear entry into a decentralized and process-oriented project, but when one takes the time to read into the goals of each proposal, and then the workshop as a whole, some critical questions come up. 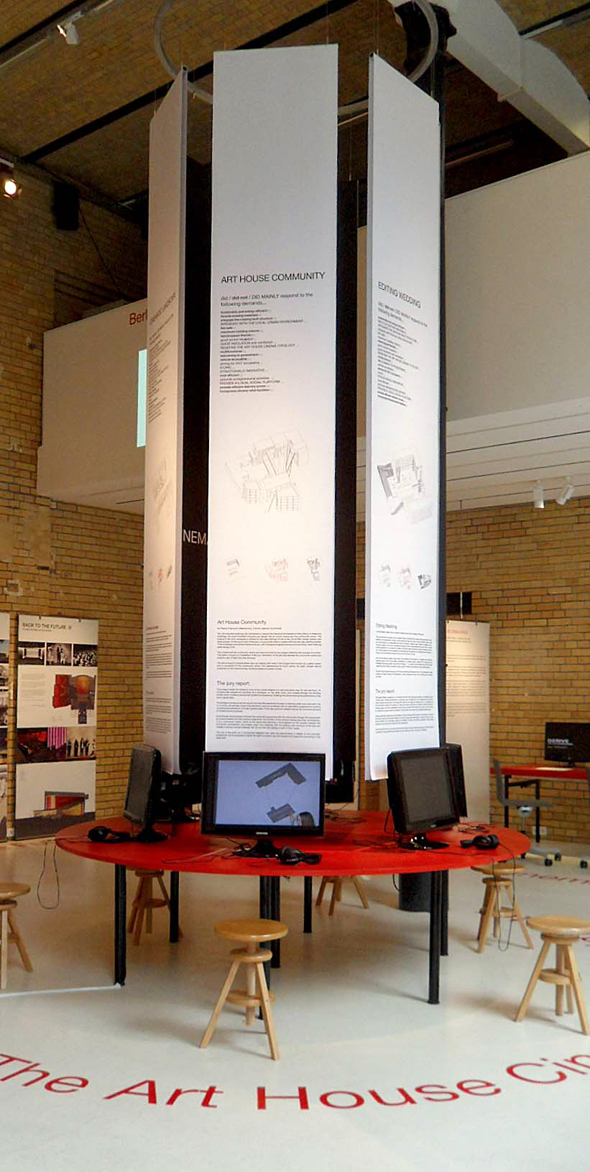 With the students of The Why Factory at the TU Delft, the ANCB sought to explore how the Art House Cinema, read as a central figure in the cultural context of the city up until recently, can “achieve a new function and integration in both urban public and community spaces.” Programmatically engaging the Mica Moca space in Wedding, the three-day workshop asked each of the six projects to explore different spatial designs that would try to establish the new cinema as a connective and communal force. Dubbing itself as ‘Can We? Make More Than A Cinema!’ the workshop aimed to set itself up as a forum for discourse on the role of cinema-space within a neighborhood. And when dealing with Berlin, it’s all about neighborhood.

But when did we enter Berlin? Sure, Aedes Network Campus in based in Berlin, and the name of the city is injected as much as possible in the various supporting literature. However, in reading the drawings, it is not only problematic how the isometric view insistently replaces plan and section, but how gallingly absent site plan is. Text and architectural drawing are inextricably linked, but one cannot be expected to replace one with the other. There is this energy, and even fearlessness, in the way that the text is treated throughout this part of the exhibition. Conventions of punctuation, capitalization, and strike-throughs are re-appropriated in a way that I desperately wish was also brought to the architectural language. 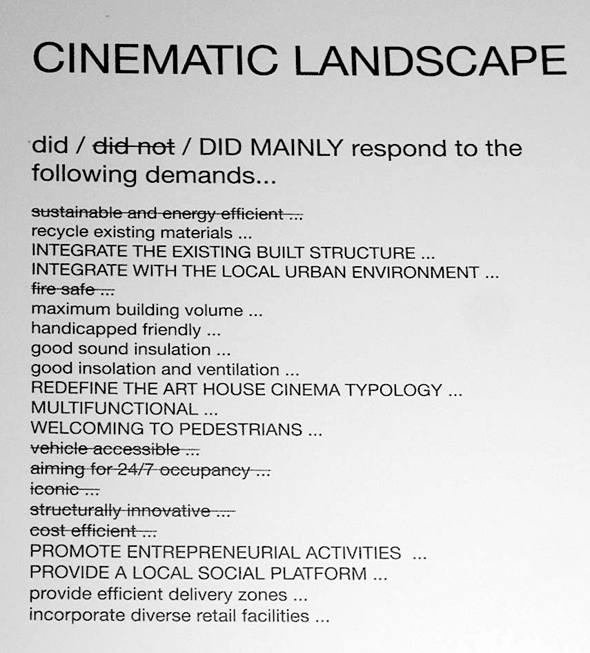 The workshop has also located itself in larger agenda: how this proposal could act as “a socio-cultural and economic generator for the growing creative economy [of Berlin].” When the generation of space and the generation of capital become intertwined, one must ask what or who ends up being left out from this inherently exclusive and regulated system. What role does this ‘creative economy’ play within the existing economy, and very rich social ecology for that matter, that it’s all too willing to insert itself into? When architects neglect to draw the surrounding fabric into their designs, when they avoid the necessary struggle and confrontation between the new and the existing, it becomes all too easy to forget living conditions. It becomes all too seductive to read everything as ‘tabula rasa,’ when the ground is actually deeply layered with ephemeral and material memory.

Ultimately, this struggle between extreme time constraints, shifting parties of accountability in terms of how the project is being generated and the parameters deployed, and questions space, value and access, illuminate the struggles inherent to profession, and art form, of architecture today.

The final statement of this workshop, ironic and critical of the incessant “yes, yes, yes” culture that the architect has come to perpetuate and embody, is still haunting in the way that it remains present in the projects that I assume were developed as a possible antidote. Perhaps all one needed to design was a ‘no.’ 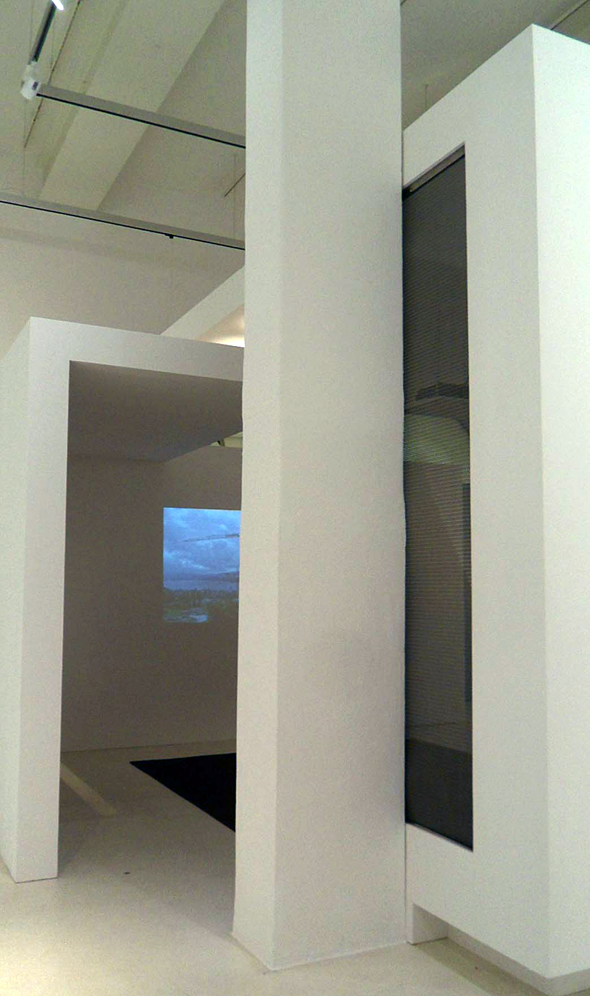 The third part of this three-tiered show does offer some repose for the mentally weary. Raum schafft Ort – Ort schafft Raum | Space Creates Place – Place Creates Space is a calm, confident and brightly simple show of work by the Swiss architecture firm Arndt Geiger Hermann Architects. The show focuses primarily on the hotel proposal for the Wolfsburg Conference Center in Ermatingen, but also includes five additional projects that allow visitors to get a feeling of how this office explores the formal and experiential interconnectivity between interiority and exteriority. It may be tempting to dismiss them based on color palate (the hundred shades of beige is a little disheartening at first), but it subdues the conversation to a point that we can focus on form, light and shadow. The full-scale enclosure at the center of the gallery fully encapsulates a lot of what the firm represents and, like that niche for Hans W. Mende’s photographs, allows one to have the quietude for reflection. 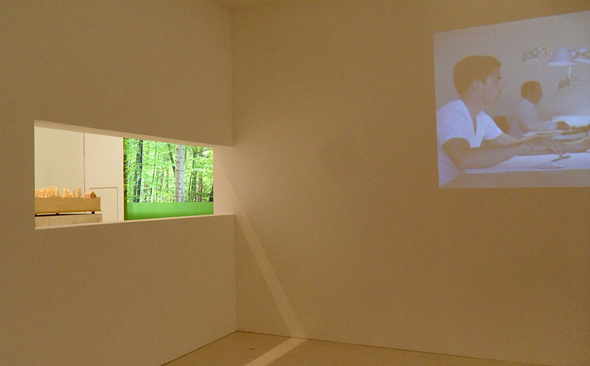 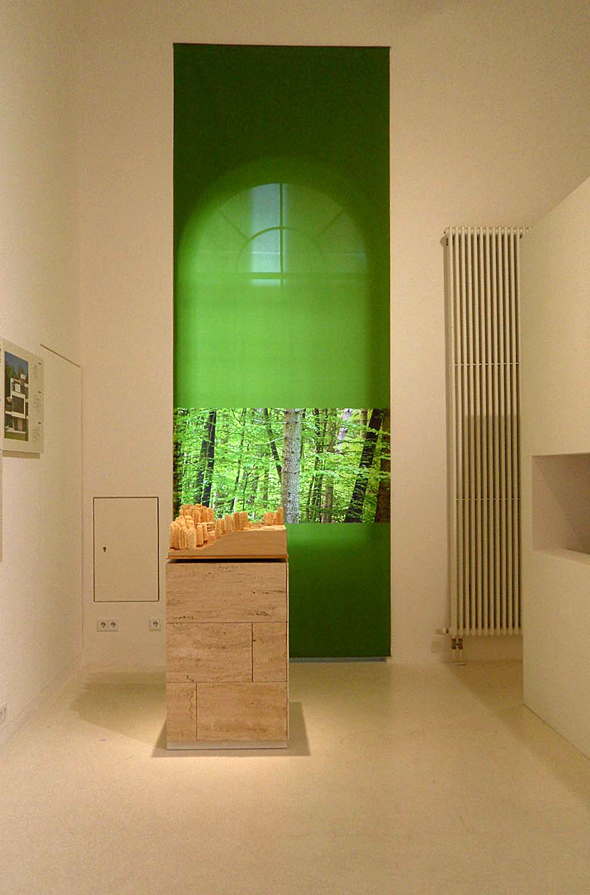 50 years since the building of the Wall: Border Inspection – The 161 Kilometers of the Berlin Wall
A photo-documentary by Hans W. Mende
July 15 – September 1, 2011

Elizabeth Feder is an architect and writer from New York City currently based in Berlin. She received her BArch from The Cooper Union for the Advancement of Science and Art and is completing a research project entitled, “Between Transience and Permanence: a New Reactivation of the Berlin Block” with the Deutscher Akademischer Austausch Dienst.