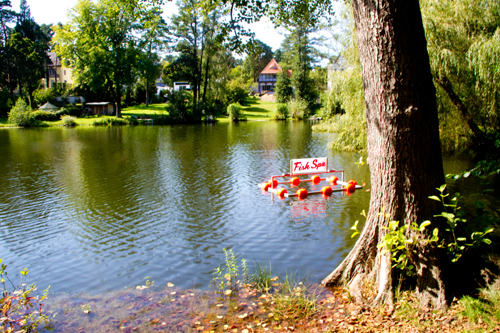 An urban/animal utopia: installation view of the fish spa.

Ask a Berliner, and most will have a story about an encounter or glimpse of a large wild animal in the city. In Berlin Wildes Leben, part of the Überlebenskunst exhibition and on display at the Haus am Wald See sculpture garden through November, London-based Michiko Nitta and Berlin-based Susanna Hertrich speculate on the future of these interactions. Their departure point is that large urban non-humans such as fish, raccoons, and crows are no longer treated as “intruders” but rather as “equal citizens,” accorded “rights” and “duties”. 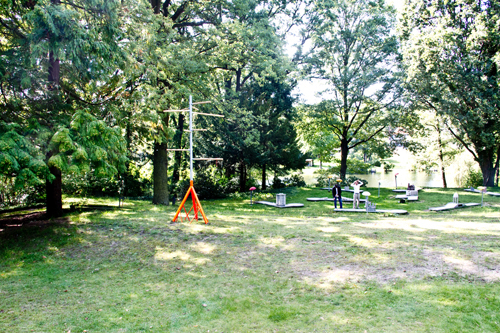 An urban/animal utopia: installation view of the space for crows.

The results are a series of starkly neon-orange branded sculptures. A stand for crows allows for the dissemination of seeds for guerilla gardening via specially designed hanging crow-snacks. “Parasitic Architecture” for raccoons and a “Fish Spa” both provide safe, species-specific places to rest. Although they are the result of significant collaboration with biologists and zoologists, the interventions occupy the realm of the sculpture garden along with the theoretical baggage that space brings. However, while the artists make the animistic gesture of giving tours during Überlebenskunst with cartoonish animal masks on backwards, they seem ultimately less interested in addressing historical or philosophical issues associated with sculpture than with the sharing of information and spreading awareness about non-human urban animals. As such, the exhibit is also accompanied by info-graphics elucidating the diverse wild animal populations in the city, such as wild boar and to fox. In this sense the intervention does not take place in the sculpture yard – after all, the objects themselves are largely non-functional models. Rather, the more profound site for Berlin Wildes Leben are the future points at which species may meet – the encounters the artists hope to mediate. 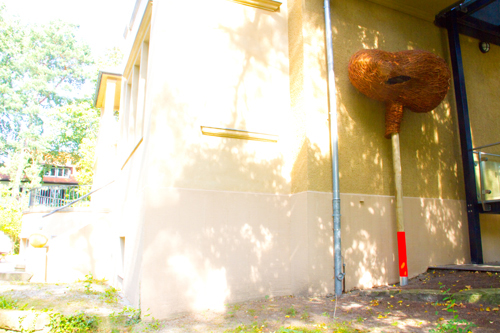 An urban/animal utopia: installation view of the parasitic space for raccoons.

In this sense, like many attempts at “design for the other”, Berlin Wildes Lebens is actually as much as anything else about the designers themselves – the humans. However, that’s still half of a human/non-human relationship, and perhaps a first step in an evolution away from the humanist ideals of the 17th century Enlightenment as represented in Bruno Latours’ Modernist Constitution that, in his words, “dictated which beings were allowed to speak and which must remain silent”. Lest one forget, the title the exhibition is Überlebenskunst – roughly translated as “Art of Survival”. As Michele Serres points out in “La non invitée de Copenhague”, the planet or, the sum of its physical and metaphysical parts that Serres calls “La Biogée”, demands nothing short of a drastic reworking of our humanist political system. In this sense, Berlin Wildes Lebens, even if it is about humans, is truly “the Art of Survival” as its this reworking our relationships with non-human beings – from those incarcerated in factory farms, to the pets in our homes, to the pests in the streets, to the parasites in our bodies, that represents part of the fundamental paradigm shift required for the continued human habitation of the planet.

Marcus Owens was born in Washington DC and is currently based in Berlin with a DAAD stipendium and affiliations with the Universität der Künste and Harvard University Graduate School of Design. He received a Master’s in Architecture from the School of the Art Institute of Chicago.