“By all means trust in Allah, but tie your camel first” — Moroccan Proverb

After sunset, this rare place, Djemma El Fnaa in the center of Marrakech, becomes a paradigmatic art fair. Values of material, or of the ephemeral sort, are put up for display; attitudes, thoughts and practices are communicated in direct interaction; artists are coming from distant places, with their various cultural backgrounds, to join on a common ground where they can create their pieces in real time. There are storytellers who narrate old Moroccan tales and Bollywood plots, musicians of various folkloric and religious backgrounds who fill the fair with music; even book sellers, tooth makers, pigment creators, dancers, medicine-powder mixers, acrobats, and body artists gather to attract an audience and perform. Entangled within the quotidian, this daily art fair carries potential for what is intensely striven for in art today: an art that is real (in the sense of being necessary) on conceptual or practical terrain; an art that has specific social functions and is openly public by being permeated by exchange and a re-imagination of value.

Storyteller at the Marrakech Biennial // Photo courtesy of Thomas Ladenburger

There are not many places like Marrakech, and it is a privilege to stage a biennale in this context. In fact, the question of context is a predominant one in the discourse surrounding the 4th Marrakech Biennale. Initiated and financially supported by the British entrepreneur and art supporter Vanessa Branson, this biennale is stemming from her desire to involve the specific contemporary art scene of Morocco, including engaging with local artisans, initiating personal relationships (between the Biennale and the local artists), and encouraging educational exchange and creative ideas. Besides her generous funding, her own hotel development Riad el Fenn was offered at the disposal of artists, visitors, journalists, collaborators and organizers of the Biennale. 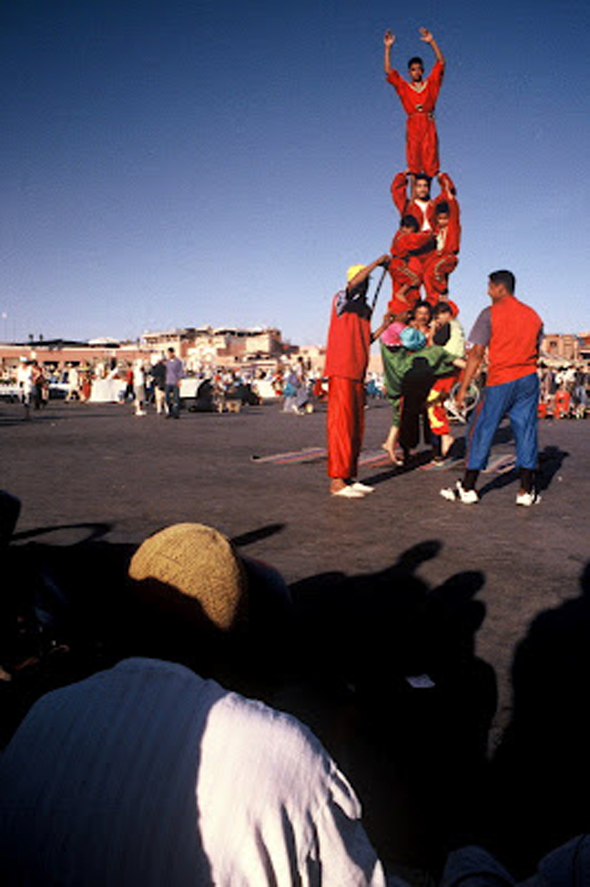 Establishing the borders of the Marrakech context means situating the Biennale in curatorial terms: additionally, delimitating the context of the Biennale implies taking a responsibility for it. The Marrakech Biennale 2012 curators Carson Chan and Nadim Samman engaged the initial proposal of Ms. Branson to involve the local, and conceived of a biennale based on either a three-month residency for elaborating the work, or a preliminary visit at the end of 2011 for field research. The Higher Atlas exhibition, part of the Biennale, named “Surrender”, staged group shows at Marrakech’s unfinished opera house (Theatre Royal), a land art work of Elin Hansdottir at the residency center Dar Al-Ma’mûn (Koutubia Cisterns), an open air monument of Aleksandra Domanović in the Cyber Parc Arsat Moulay Abdeslam, and a collection of films at Bank al-Maghreb, situated at one side of Djemma el Fnaa. Its relation to this context has been the main issue of debate raised by critics (both foreign and Moroccan). But in this contemporary post-colonial awareness and overflow of academic debate, the Biennale makes a “nolens volens” statement in this regard. 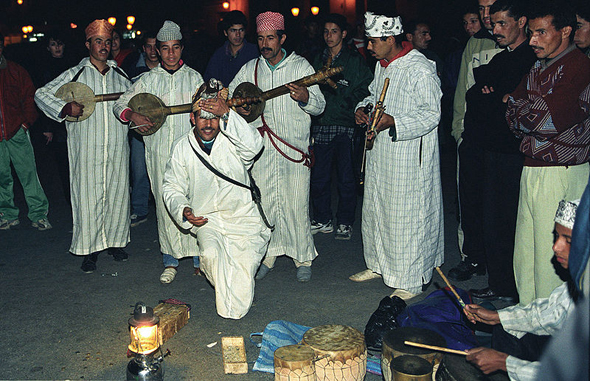 The two curators’ option for the main location of the Biennale, the Theatre Royal, is suggestively rich, and offers a generous site for the works. The theater is a modern ruin of an unfinished opera: with its bare stone walls, uncanny dark labyrinths, unexpected openings, terraces leading up to the roof, and a heavy and frozen temporality, it is isolated from the busy city and hints at Marrakech’s less obvious urban layers. Here the viewer becomes aware of the unfinished dimension that defines much of Marrakech’s built environment. For example, the megalomaniacal and unrealizable project of Hassan II, who tried to copy the Paris Opera, points to the not-always-coherent architectural blend between Africa and Europe. Western architectural elements are also present in domestic architecture, but remain defective and not always truly assimilated.

In discussing the Biennale’s scattered locations around the city, which defy the centralized model that most Biennales represent, co-curator Carson Chan explained that the curators found that site almost by chance, and at a very late point in the project (as the intended exhibition in the Badi Palace could not be concluded). Nevertheless, the Higher Atlas show was criticized for not being really accessible for the Moroccans and not purposely addressing the local audience. The exhibition’s accompanying theoretical volume does not benefit from an Arabic translation (English-French only), and it is expensive by Moroccan standards. Moreover, the exhibition, besides being scarcely announced to Moroccans, includes only one artist from the African Continent (the Cameroonian Pascale Marthine Tayou) and only four Moroccan artists. The one place where Moroccans are truly prevalent is in the arena of logistical support, i.e interns, workers, and assistants to the artists. The Moroccans Younes Baba-Ali, Faouzi Laatiris and Hassan Darsi showed their installative work in the exhibition, while the caustically engaged group Jamaa (جماعة), conceived of a poster-work intervention that has expressed an influentially critical voice. Additionally, Jamaa’s incisive and well-informed Biennale feedback has been spread across many blogs and online journals.

The Biennale also has a program of parallel projects that mainly includes Moroccan artists and local projects and initiatives. However, this part of the Biennale only has a peripheral role and is hardly linked to the main events. Among these projects is an exhibition at the University of Arts (Ecole Supérieure des Arts Visuels de Marrakech), several group shows located in various hotels, an exhibition at the French Institute, and the urban interventions of Younès Rahmoun, where he invited an audience for a ride through the medina (curated by Abdellah Karroum).

Not only is the small number of Moroccan artists invited to the Biennale disconcerting (the exhibition could serve as a platform for local artists, offering them support and exposure to the international community), but what is also problematic is the lack of acknowledgement by the ‘Higher Atlas’ exhibition and book of the immediate Moroccan reality, including its present condition and historical layers. When finished, the accompanying volume still leaves the reader curious about what contemporary art is in Morocco, in particular its specific formal and conceptual roots. For instance, how is art taught and spoken of in Moroccan universities? How is folk and traditional art dealt with? What are the art galleries or other institutions that support artists like, and what cultural, social and financial needs do they (or do they not) respond to?

The Biennale itself seems to lack the richness of what is happening in the city already. As a whole, the exhibition does not seem to reflect the existing local and intellectual substance. There is a struggle to integrate the performative potential that one sees in the streets (the everyday interaction, the local events) into the Biennale’s total structure and in the individual works. It also seems that the Biennale team did not work to find ways of producing a vivid collision between the visitors and the host artists, curators, or institutions. The potential of the Marrakech Biennale is to stimulate structures of cultural exchange than can last over time and that can stimulate an in-depth awareness of the local cultural content.

On the other hand, some of the works embody a definite attempt at site-specificity, in the sense of integrating the pieces into the surrounding landscape, and involving local craft techniques and materials. Some works have architectural qualities, such as installations that experiment with urban forms and functions. Take the elegant Loom Hyberbolic by Barkow Leibinger Architects, which is departing from the question: “What effects can we produce by considering geometrical forms, of which there are plenty in Marrakech, as constructed by using current algorithm software (Grasshopper, Rhino) and to speculate how they might be rendered (made physical) by local construction technologies and material?” A display of “traditional techniques,” or elements of traditional crafts are obvious in the works of Megumi Matsubara, Aleksandra Domanović, Hadley+ Maxwel, and Juergen Mayer H. 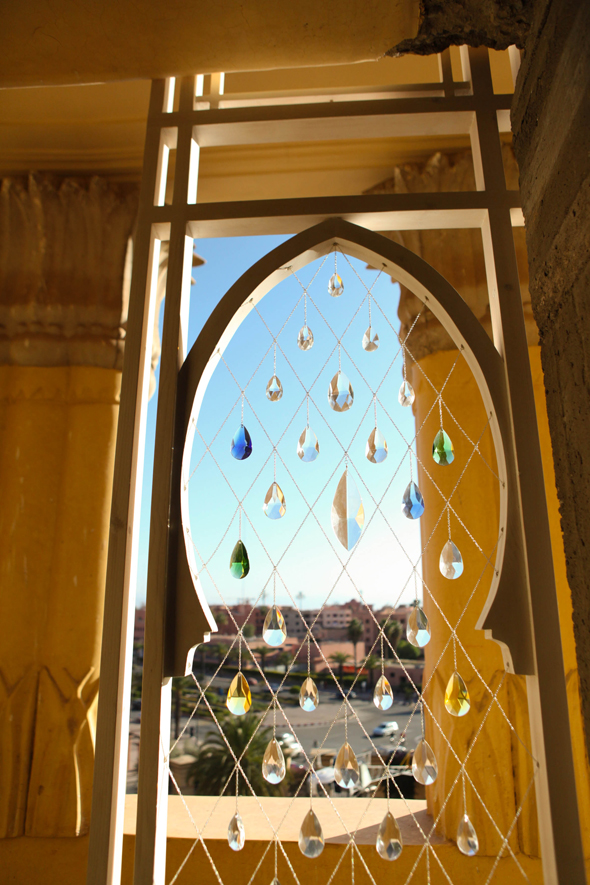 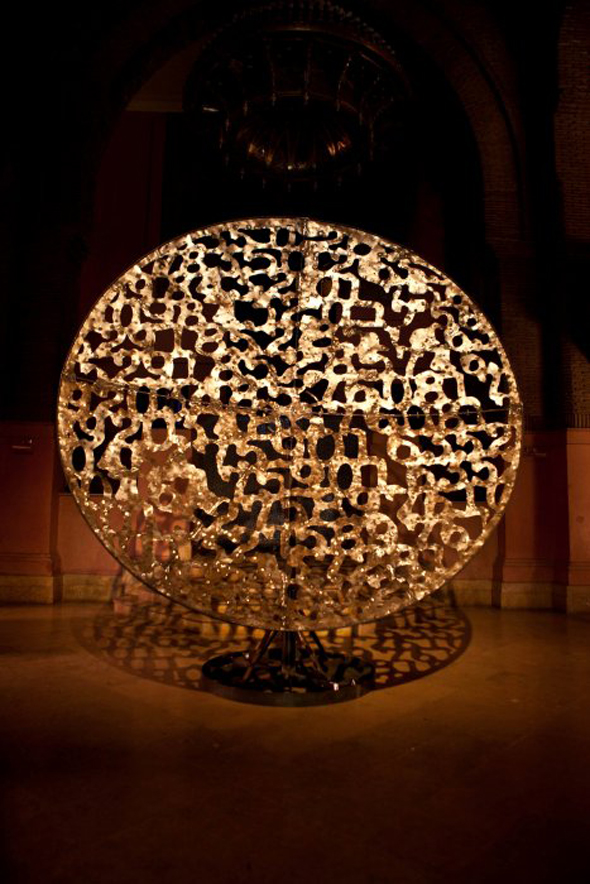 In a short discussion near her work in the Cyber Park of Marrakech, Alexandra Domanović went into more detail about her working process:

ALEKSANDRA DOMANOVIĆ: I came to Marrakech for the first time in December. I was walking around and discovered that there are not many public monuments here, as we understand them. Another thing that I was inspired by was a technique of ancient Morocco, where limestone plaster is mixed with pigment. I had this 4,000 year-old Moroccan technique, used traditionally for hammams and palaces, in the bathroom of my hotel. It is called tadelakt in Berber and means literally to rub, as they rubbed it to squeeze out the air bubbles. It is a very cheap and ecological technique, but it is dying out. It started to get resurrected by the people who are buying and restoring riads in the medina. It has been imported in Europe as a extremely expensive and luxurious finishing.

I was born in Serbia and a lot of my work is dealing with the trauma of Yugoslavia breaking up. I took a monument from the 60’s, which belongs to a series of antifascist monuments of the revolution built after World War II, and I compared that period with the revolution that is happening now in the Arabic World.

MARTA JECU: In which way did you made this comparison?

AD: I compared the revolution that happened in post-World War II ex-Yugoslavia (the liberating effects of having a new land free from the Austro-Hungarian domination) with the liberating effects of the French retreat from Morocco in the 1950’s. It might have been the same spirit. What was interesting for me was that a lot of these monuments had been destroyed in the 90’s. In Croatia, there are over 3000 monuments that have been destroyed. When I was here, I had the impression that using this tadelakt over any object would make it look ancient: because using this eliminates edges, it is a way of antiquating monuments.

MJ: The connection that you acquired here with this culture, how will you deal with it further on?

Marta Jecu is presently a researcher at CICANT Institute in Lisbon, and has contributed for various magazines, including E-Flux, Kaleidoscope, Journal of Curatorial Studies, Idea Arta+ Societate, and various critical books, such as Visual Studies, Ed. Jim Elkins.
thinkaboutspace.net