A nearly completed film set fills most of the studio in use for Reynold Reynolds’ current project, The Lost. A tall glass tube stands in the center, a plant bathed in a purple glow uses the far wall for support. Tucked away in a corner, surrounded by medical illustrations, old books, and scraps of aged wallpaper, is a satin bed with a coffin-like cover, the artists’ favorite object to show off to visitors. 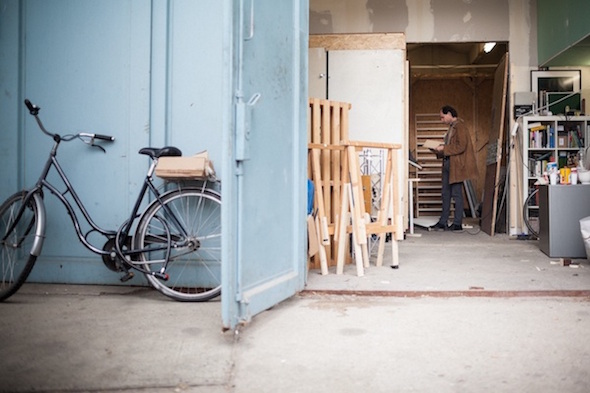 According to Reynolds, his conceptual film project The Lost is based on artifacts from an unfinished film that began production in the 1930s. The original project was disrupted by a suppressive Nazi regime of cultural control, and its vestiges preserved by the original cinematographer. Reynolds goes on to say that these artifacts, found footage, storyboards and script elements were uncovered in an archive and ultimately discovered by Reynolds’ team. The next shoot and performance, set for this Sunday, May 6th, is one in a series that started about a year and a half ago and will ultimately be compiled into a feature film – that is, the film that the original filmmaker intended to make, “to the best of our abilities,” explains Reynolds.

With the help of his team, including art director Ana Bellido, cinematographer Imogen Heath, Maria Fernandez working with sound engineering and costume, and set construction assistants Maud Chalard and Simon Hayer, he is preparing for the newest installment in a multi-phased film performance, that is, a film shoot with a live and somewhat interactive audience. 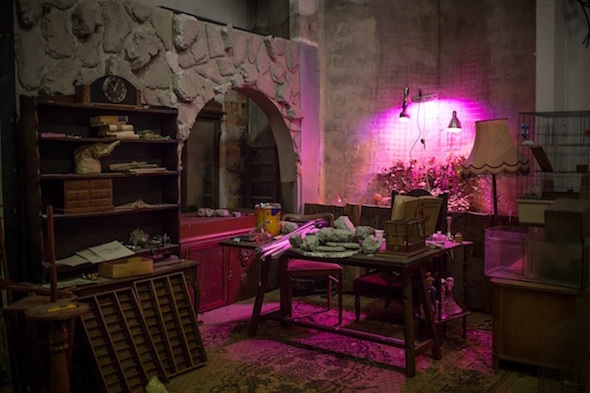 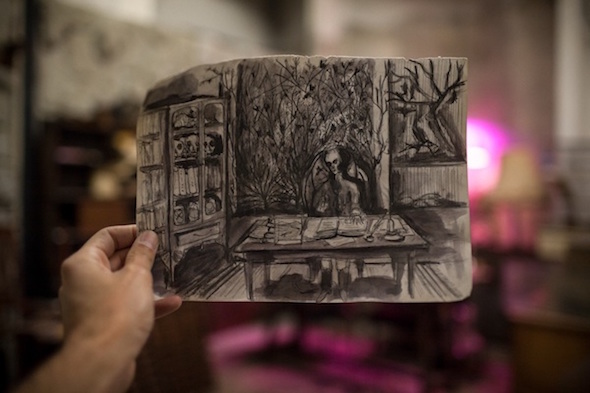 Like previous film performances of Reynolds’, The Lost calls into question what a “film studio” vs. “artist studio” space represents. He shoots each section before a live audience, often allowing them to interact with the performance as well. Reynolds combines the tedious practice of filmmaking with the spontaneity and energy of an engaged public – something between a Borriaudian production and a cabaret. 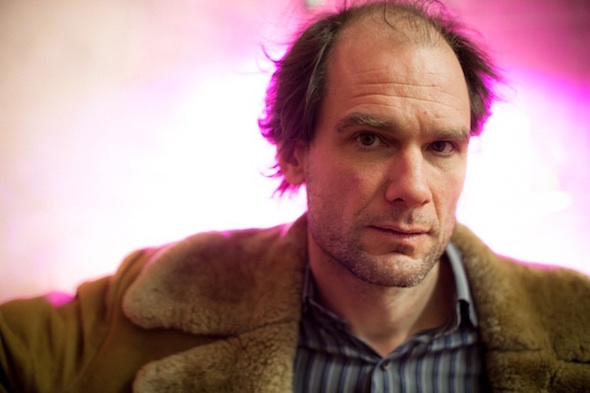 After finishing an undergraduate degree in physics at the University of Colorado at Boulder, Reynolds became interested in experimental film, studying first there under Stan Brakhage, and later earning an MFA at the School for the Visual Arts in New York City before coming to Berlin for a one-year residency with the American Academy. “I feel so lucky to have fallen into Berlin,” he says “My feeling of being in New York now is that its just so centered towards the galleries and selling. It’s just not the lifestyle I want.”

To him, Berlin is still a space where art and artists have not been required to commodify themselves – a laboratory where interesting people come to do interesting things, where studio space and a lifestyle that supports creative exploration and production is still affordable. “My idea of what an artist is is not somebody who’s making super shiny objects for a gallery,” he explains. “There are a lot of people helping in my work, a lot of actors and performers, and a lot of people come for short periods, it seems extremely open and flexible. If you’re not in a center where people are coming because they want to experience something interesting or creative, then it’s really hard to get people involved. Here people are always contacting me.”

Human’s relationship to time is the focus of most of Reynolds’ work, but in works like The Lost and Letzter Tag der Republik/ Last Day of the Republic, he specifically engages the context of German History. In “Letzter Tag der Republik” Reynolds presents a dual-channel video projection that showing the deconstruction of the Palast der Republik, a cultural and political icon of the German Democratic Republic.

In nearly all of his videos, Reynolds shoots on 16mm film, a medium he says evokes history and nostalgia. He and his cinematographer, Imogen Heath, have developed their own motion control system to create a stop-motion-animation-like look when shooting live action. The effect gives his work an old-fashioned feel, bringing to mind the hand-cranked look of early film. 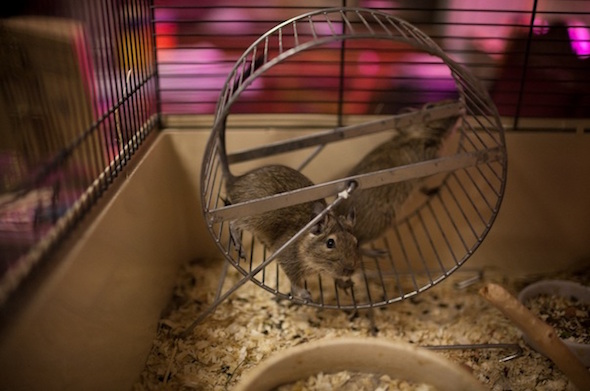 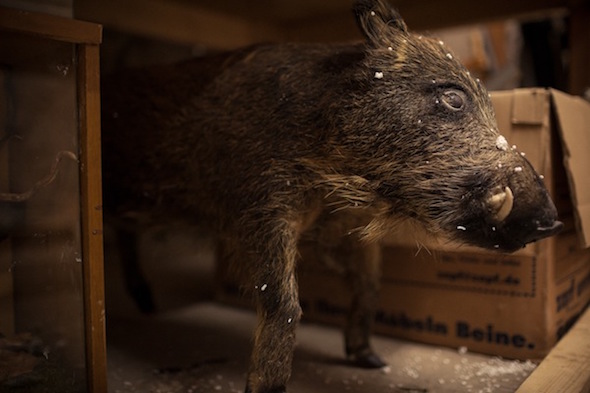 The films that comprise The Secrets Trilogy (Six Easy Pieces, Secret Machine and Secret Life), were also shot using this technique. Their content speaks to the specificity of the medium – presenting images of the measurement of time, light, mechanization of the human form, and even direct references to Duchamp and Muybridge’s respective motion studies.

But Reynolds’ affinity for film is relatively practical. “I don’t believe that film has something inherently spiritual about it that is somehow capturing somebody’s soul or something like this, I’m just not of that mind,” he says. “I just believe its a much more interesting and better medium than video – and that you can actually control it, you can understand it. The video camera now is a closed box.”

As many other film artists scramble to find their way in the increasingly challenging landscape for film production, processing, and exhibition, Reynolds has found his own solution.

Frustration and panic over closing labs and increasing costs of processing doesn’t affect his practice – he’s built his own facilities to develop and transfer his material in his own studio. “I’m trying to be kind of independent of all the labs,” he says, in a somewhat inspiring matter-of-fact way, as if this were the obvious solution to the struggles of analog aficionados everywhere. 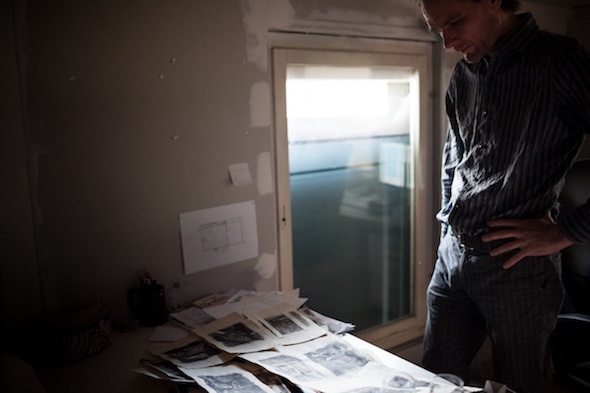 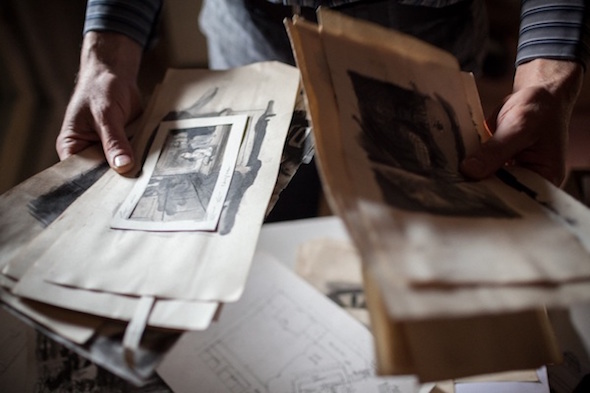 “These days, they’re not doing such a consistent job anyway – to run a good lab you have to really care or you have to have a lot of volume.” In the absence of this volume, he explains, poorly trained or just poorly motivated technicians can ruin expensive projects. “It’s changed – you can’t rely on results.”

Reynolds does, however, present his work as transferred HD video. He likes to avoid exhibiting film prints themselves. “The video transfer just looks better,” he says plainly, citing recent exhibitions in which, due to old film projectors, inattentive or poorly trained projectionists, and wear and tear over a long show, the projected film pieces looked shabby and flawed.

“My art is inside the frame,” he explained, “it’s not the machine or the process. I want it to look as good as it can.”