Part two of a two-part interview. Click here for part 1.

At the Co-Verlag project space you have different people working in different media and creative practice? How do you find they interact together?

JG: Co Verlag is not the whole house. It is hard to say exactly who runs 111 – it is what you make of it. Over ten years it has been a mecca for Icelandic artists, Uruguayan artists. It’s a house of possibilities. Co-Verlag came in there to restructure and make the space into something bigger. 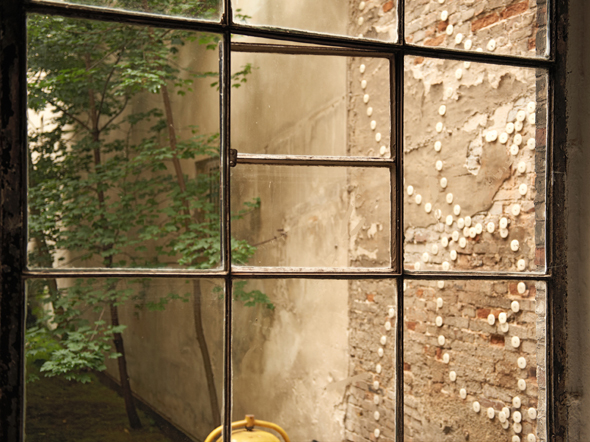 RL: There’s a nice energy in the house, there’s an interesting mixture of people. It’s not just a painter’s house or a video art house. The Pipe, one group using the space, is a media-transfer start-up company and has a history of exciting projects. When I arrived, there was a huge transfer going on between Iceland and the house. Jonathan and I actually met through one of these exchanges in Reykjavik. I’m from New York, and Jonathan’s from Germany. The Berliners were in Iceland and we met at an opening. 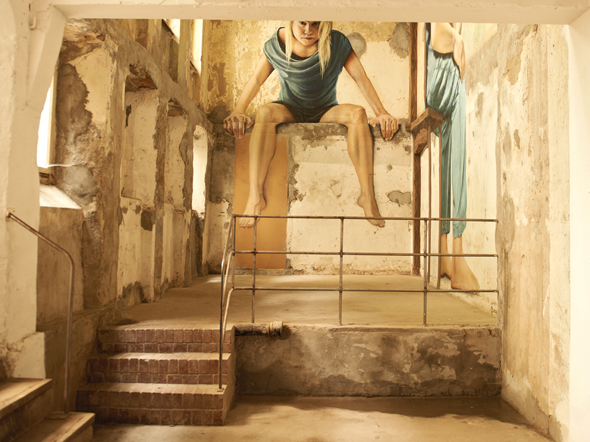 The house has its own energy. A couple months ago someone knocked on the door and it was an artist from Uruguay. He had won a scholarship to be in Berlin for a couple months and he had no money except for a small amount to make art. He had heard he might be able to get a studio because the house is “friends with Uruguay” and someone had told him to come here. This artist stayed, he was given the ruin in the back as a studio while we were renovating.

JG: The owner of the building likes what we do and supports us. He pays the basics of the building’s yearly expenses. But it could just as easily be over tomorrow, that’s always the risk with these projects.

You have called the project space an ‘international think tank’ and you spoke of your Co-Verlag book project as a ‘collection of ideas’. Is this a transient project or do you feel it is rooted in these spaces in particular?

RL: We’ve discussed many times going to other cities and also swapping spaces. For example, we’ve had a collective from Australia that was interested in coming here and we thought about swapping art spaces for six months. The ideas that we came up with at MMX and continue with Co-Verlag, we would like to take to other cities and other spaces. 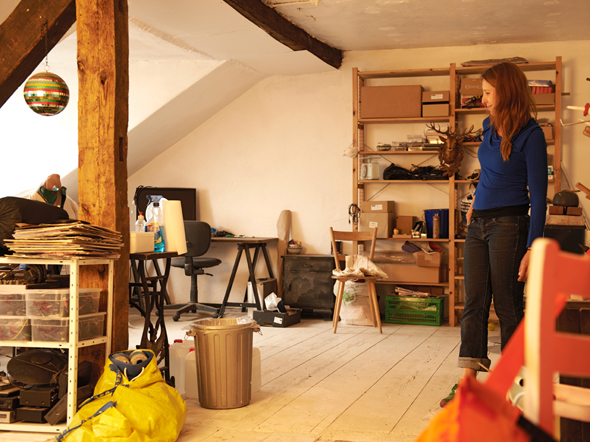 Many of the works exhibited at Torstrasse 111 seem to be informed by the massive process of renovation that you undertook there over a year. Your ‘Still Life’ piece, in particular, Rebecca, as well as James Bullough’s ‘Giant’ portraits. Can you talk a bit about how that process was incorporated in the works you chose to exhibit?

RL: My ‘Still Life’ series was us being involved in the house and cleaning it out, as well as all the traces everybody left. When we came in, there were not a lot of people there, so we don’t know the history of all the objects we were touching and removing. It was pretty dramatic, as we were knocking out walls and throwing things out windows, it simulated other things: destruction, natural disasters, and the articles that are left behind. Like these iconic photographs after Hurricane Katrina, with teddy bears left on the side. Remnants. For James, he felt like his ‘Giants’ were people of the house who were getting kicked out. They’re the last traces.

JG: Art can also happen out of the construction. For us, it was really exciting to do something we hadn’t done before: knock out walls, carry rubble and fill thirty containers. In this context you also develop work on a vision-the revealing of a space can be art. That is the interesting part. At MMX, when we first walked in it was actually insane that we had any vision at all. It was just full of trash, there were walls everywhere. No one could imagine how it would turn out as it did within three months. This was always a very interesting process. What we did at 111 was even crazier. We suffered but we also had a lot of fun and learned a lot. 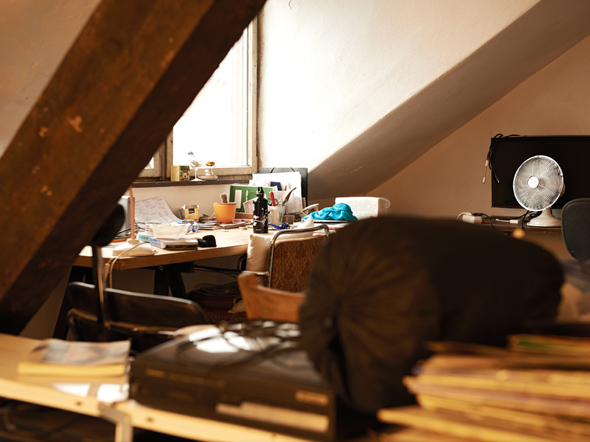 RL: We had an international crowd helping us. We had a group of people we got on with and a vision for the space and that energy fed into it. We learned totally new skills doing electrical work and plumbing. There’s an increase in being hooked online and to machines all the time, so it’s liberating to also do something physical and to see that transformation. It’s a totally different experience to see a junky space, and turn it in to something beautiful and then to create an exhibition and have 1000 people show up to the opening.

JG: The spirit is there to still do stuff without any funds but it is more often the case that people look for profit if they invest a lot of time. It’s natural. But with art you can’t really look for profit, not on that scale anyway.

RL: We’re not a commercial space so we don’t have that pressure of having to make a certain amount of rent every month. It means we can show artwork that you can’t sell. Oh, that’s not true though because we sold a string once. The string to infinity (Stiller, 2010) by Michael Ebert. It started in the cellar and disappeared in to the air. But there is not that financial restraint dictating what should be shown.

Could you tell us a bit about another of your project spaces, the Cave?

RL: Towards the end of MMX we met another American, James Bullough, who wanted to be involved in the project. We showed him in two shows. When we closed MMX, we still did a couple events out of it. We were asked to produce a show for TransArt – a transitory MFA program. James said he’d like to work out some new ideas and if no one was using the space he’d like to start painting there. We had already done this a couple times. We had some film sets here after the space closed: some film students came and built a whole prison set. The space got used a lot, the rooms were repurposed for peoples’ needs. James’ partner Karl Addison runs a space in Neukölln, Idrawalot. Through their network of international street artists, these acclaimed underground artists came to this secretive place to paint and collaborate uninhibited. Up to ten people would all paint on the same day and it was never open to the public.

JG: The Cave is over, this location is definitely not going to be used for art anymore. Maybe a nice, posh gallery actually. Or a café. 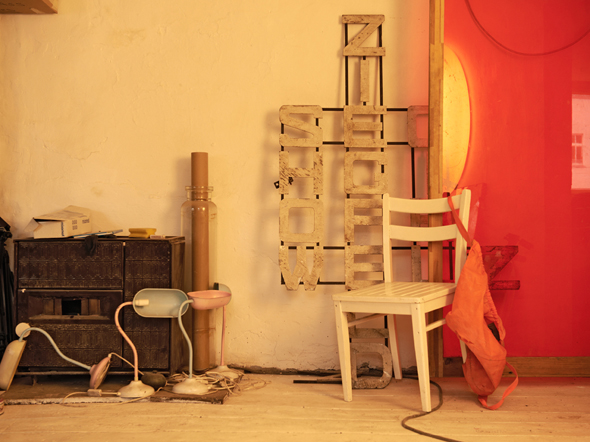 What is next for Co Verlag?

JG: The future for now is wide open. The Co Verlag project will not exist anymore at the 111 location because of the scale of the ideas and vision we had are too big and too overwhelming for this quiet location. Whenever you do big projects you need a break after. We didn’t take one after MMX. The space at 111 took almost a year of our time. But we’re looking forward to going abroad for a bit, to create some kind of exchange with others. I’ve been here for ten years in the city and I’ve seen a lot of change. I didn’t see the Wall come down but that is not really concerning my generation anymore. I’ve seen how art changed and how Neukölln became popular. I’m actually curious what it’s like in other cities now.

RL: We’re on a break now. I’m a practicing artist but running a space means you don’t have a lot of studio time. So I’m returning to the studio. We still get asked to put together screening programs and exhibitions. We went to Ireland last year to present Berlin video art.

Berlin is always in transition, it’s not really grounded. There is a constant flow of young energy into the city and this makes it an experimental place to create and try out new things. Like the experience of renovating buildings from the ground up without a budget or funding to create alternative art spaces in the city center, this is uniquely Berlin. The overactive bureaucracy of other cities makes it nearly impossible elsewhere.

Although Co Verlag has left this location, the ideas Co Verlag stands for remain active. We will continue to publish and curate in the city and internationally.