These words by Alfredo Jaar close what is a succinct but lethal description of the 1994 Rwandan genocide. They are projected in white light along a dark hallway connecting two installations in Jaar’s recent retrospective, The Way It Is. An Aesthetics of Resistance.

In the first of the two installations, entitled Real Pictures, one hundred archival photo storage boxes housing more than five hundred and fifty photographs are arranged in architectural shapes around a darkened room, lit only by spotlight. The room is silent and grave, and so become the people that enter it; no longer a gallery space, it has been transformed into a memorial. The boxes are engraved in white with words that render the photographs within. They are at once both substantive and lyrical. In reference to the Ntamara Church massacre, Jaar’s words on one archival box read: “Taken 5 seconds later, this photographs shows the rich blue sky, a bit of the tree line, and one perfect white cloud hovering above the church. The stench of death still lingers.”

The second installation is of those very eyes, the eyes of Gutete Emerite, a survivor of the Ntamara Church massacre and the Rwandan genocide. They are duplicated onto one million slides, strewn into a pile at the center of the room like corpses in a “mass grave” (www.undo.net). From each of the slides, there is a streak of white—a reflection of the camera flash in the woman’s eyes. At the installation’s edge are a number of loupes, meant to draw our eyes nearer to hers, to the very reflections of ourselves as voyeurs. “I’m interested in the eyes of the audience being only one centimeter away from the eyes of Gutete Emerita. I am suggesting here that her eyes acted as a camera who saw something that we could not see.” (www.undo.net).

There is skill to the way this is presented: the words are in conjunction with the light installations, the timing, the pace anticipated, as everything is exacted to inspire an almost involuntary emotional response. Jaar was an architect long before he was ever considered an artist, and it shows in the organic integration of his pieces. In an interview with The Brooklyn Rail, Jaar says: “My whole concept of searching for the essence of a place or a space or an issue really comes from architecture. I still consider myself an architect making art.” His monographic retrospective – spread over three of Berlin’s contemporary art galleries: the Berlinische, the NGBK, and the Nationalgalerie – is a structural masterpiece in both the physical and figurative sense.

In the Berlinische Galerie, the exhibition takes over most of the first floor, filling the various chambers and walkways with bright, hollowed lights and subtle, elegiac narratives, with architectural designs and harrowing videos experienced like theatre pieces. The exhibition is a multi-media masterpiece, though the notion of classifying it with contemporary buzzwords like “multi-media” seems a belittlement of the graveness and gravity of his work, which is about human suffering and how it is understood, communicated, and alleviated. In this manner, The Way It Is is about everything: the global relationship between the First and Third Worlds; the problems of perception and representation; their connection to the world of media and our sense of reality; the very notion of humanity and what it entails. 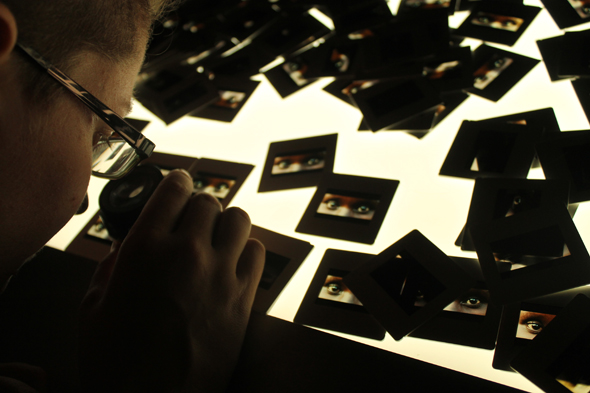 The title of the exhibition both obscures and illuminates the complexity of the information we are confronted with. Its first phrase, The Way It Is is multi-fold. It is both an acceptance of the realities of atrocity and a critique of the modern-day apathy to suffering. The acceptance of a reality, Jaar seems to say, is not the acceptance of it as the only reality. It is, as Sontag wrote in On Regarding the Pain of Others, a failure of the imagination. In his interview with The Brooklyn Rail, Jaar laments this apathy, which he likens to death: “I am afraid we have lost most of our humanity, we are already dead, or almost, as human beings.”
The title’s second phrase, An Aesthetics of Resistance, is meant less as a practical call to arms against specific transgressions (though the structure of many of his exhibitions, some with adjoining rooms filled with relevant political literature, implies this is equally important.) His resistance is a more personal, human one; a resistance against the emotional lethargy by those overwhelmed by images of suffering. Jaar explains: “I feel we are bombarded by too many images, we don’t see them anymore. The media gives us the impression of being present somewhere but when we turn off the TV or close our newspapers we are left with an incredible sentiment of absence.” (www.undo.net) 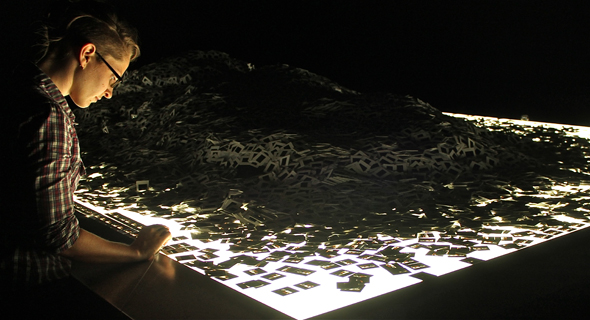 Jaar’s response to these realities of atrocity and apathy is to reengage the audience, to strip through the layers of indifference and reignite our very humanness: our sense of empathy and responsibility. He does this by teaching us how to see again, something that he believes we’ve lost the ability to do. The careful structuring of the exhibition – the curation of which Jaar had an integral part – is a deliberate attempt to start from scratch, to relearn how to see and, consequently, how to feel. He does this by omitting images, by presenting them with words, by using light to blind and darkness to illuminate, by reversing the very mechanism of camera lucida. He wants viewers to feel more than either compassion or entertainment when viewing representations of suffering. He wants them, in the words of scholar and documentarian Ariella Azoulay, to restore their citizenship through viewing.

When discussing the design of video piece The Sound of Silence, the most agonizing and impactful of the installations, Jaar says: “What I wanted was first to blind the viewer as soon as they entered the space. I gave myself a conceptual program: I will blind you inside even more.” (The Brooklyn Rail)

Alfredo Jaar “The Way it is. An Aesthetics of Resistance” is on view at