To admit, I spent an inordinate amount of time, last month, watching olympic gymnasts do impossible things on the barbie-pink mattresses of the London gymnastic hall. In glittering one-pieces, their makeup running with tears and sweat, these girls’ bodies were hypnotizing, their efforts communicating no message besides years of practice and physical ability. I watched on safely from my couch. 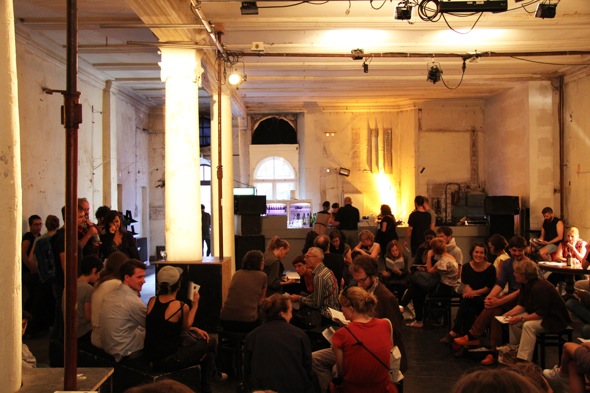 In the audience of “Tanz im August”, which ran in Berlin over the past two weeks, I could not remain as passive, nor as removed. Contemporary dance is, artistically, worlds away from olympic gymnastics. Personally though, as strictly an audience member at both, the experience of watching them holds some of the same unnamed pleasures. Namely, sitting in the dark audience watching toned bodies doing things I most likely cannot. These aren’t, in themselves, the reasons I watch contemporary dance: when performers are expressing ideas and stories, these secret enjoyments are forgotten. But sometimes I can’t help but get that double-cartwheel “how did they do that?!” moment. Contemporary dance will often use pedestrian movements, and uninitiated ways of moving, to contrast with histories of ballet or, more often, modernist ways of moving and the dancers’ disciplined bodies. of moving. And yet, as a viewer, I know the performers I’m watching are trained, and have the physical courage and choice to move the way they do. This distinction puts them onstage, and me in the audience.

The performers I watched in “Tanz im August” were composed and trained, but chose to be vulnerable, and to challenge the audience out of our chairs. Last weekend, Ehud Darash’s ongoing project “Five Steps Towards Constructing Resilience” was presented in what was essentially a group show of time-based work. Darash, in collaboration with Diego Agulló and Marcela Donato, converted an idea he had been expressing in movement for over a year into two new mediums: a booklet, and an evening of performances at Sophiensaele. The book was the audience’s guide to the evening, and we were referred to it as we were being led between different performances throughout the building, although the information in it rarely explained exactly what we were seeing. Instead, the event, the book, and the history of the piece functioned as three different iterations of Darash’s idea of “Constructing Resilience”. 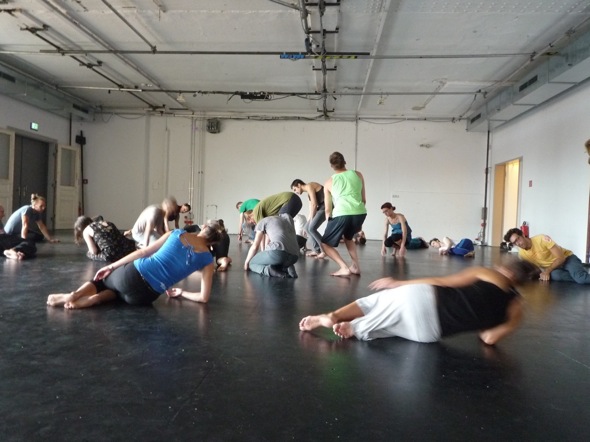 This theme was interpreted by ten performers, who had all been part of the piece’s earlier iteration in Berlin. The week before, the group had performed meditative walks along lines in Berlin, adapted and bent to mirror lines of earlier social protests in Tel Aviv. At Sophiensaele, Each participant staged their own interpretation of the theme, and the political echo faded into an urgent, appropriate discussion of form and of performative time. As an audience member, I was expected to join the discussion, assuming not only that I understood Darash’s complex idea, but that I too would have something to contribute to the group. The audience was broken into ten groups, so that I saw each performance in an audience of only five. Of the performances I saw, Agata Siniarska was direct and precise, a self-conscious dancer struggling with meaning and delivery. Philipp Enders had individual MP3s with different sound experiences for each one of us, telling a history of observing people’s movement and inviting us to move and observe each other’s private/public moments. For Darash, “constructing resilience” has a specific meaning in dance, based on his experiences of making repetitive movements into patterns that naturally come to a breaking point. Yet even as he was explaining this idea with movement, he proposed to our small audience to think of our own repetitive patterns and critical points. The shift made his dance moves express something real and personal for each of us, and invited us to think of routines in work or relationships as possibly subject to the same kind of practical manipulation. Darash does not assume his audience members are artists, but rather that his art is only one way of dealing with these everyday ideas. 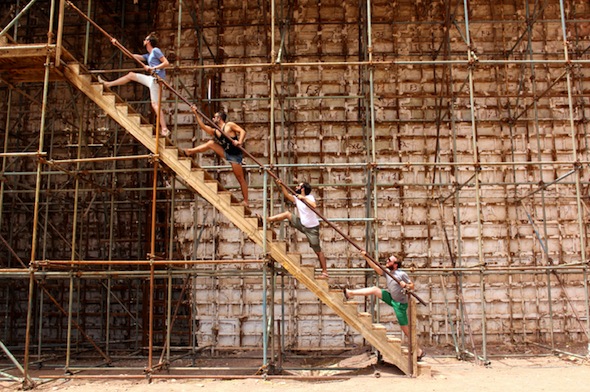 The next night, the four performers in “A Coming Community” also treated the audience directly, but more like a group of naughty schoolboys playing tricks on their baby-sitter. Pieter Ampe, Guilherme Garrido, Hermann Heisig and Nuno Lucas are all trained dancers or choreographers. In their attempt to collaborate onstage, they become overgrown children, playing with props, trying to outdo each other to the point of physical pain and ridicule. The feeling of purposeful show-off makes the audience, including our gasps of pain or disgust, crucial. The performance was intensely physical, and on one of the hottest evenings of the summer, the performers were drenched in sweat and the viewers were fanning themselves. In addition, the four performers’ disinterest in showing off their skill — apart from their physical recklessness, and their comfort in being naked — made the audience feel uncomfortably close to the action. The dancers played with giant balloons, latex suits, and one very strong leaf blower, testing what their bodies can do with each other and with the props. Self conscious and ironic, their struggle was a performance of their collaboration: a funny, exhausting, meaningful attempt, which produces nothing physical but was great fun on the way.