Obstacles stand in the way of sculptural production in India: lack of funding, class divisions in exhibition spaces, difficulties experienced by artists in obtaining documentation to go abroad. The Creative India Foundation, established in 2010 for the purpose of supporting art, artists, and the art scene in the country, is currently developing a large-scale sculpture park in the Hyderabad area. The Foundation hopes to provide artists and spectators alike with a unique space for the production and exhibition of sculptural works — a space which Diana Campbell, the Foundation’s director, says does not currently exist in India: “there are no sculpture parks, there’s no public art, there are very few opportunities for artists to make works at this scale.” Having conducted over 220 international studio visits, Diana Campbell recently landed in Berlin to partake in a residency at the N.B.K. and to scout potential artists for the Foundation’s future park. 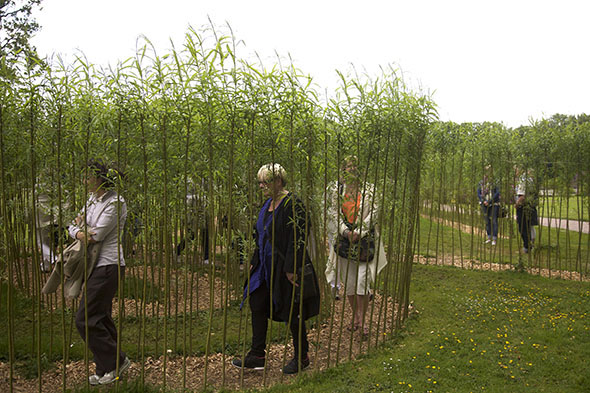 NATASHA KLIMENKO: Tell me a bit about the Creative India Foundation. Does it work mainly with sculpture?

DIANA CAMPBELL: At this point, we’re working on the sculpture park, so yes the focus is mostly on sculpture. In India, there generally aren’t museums, galleries, or public institutions that can support artists making big sculptures — they’re really expensive — and then there is no space for storage. Luckily this is starting to change. Artistically, the need for support with sculpture is the greatest, so that’s what we’re focusing on. The definition of sculpture, of course, is pretty broad nowadays, so we’re also supporting things like ephemeral installations, for example, by an artist who collaborated with farmers in the Dehli area where there are large problems with genetically modified seeds killing crops. He is making sculptural seed balls that can actually grow and be taken away — so some of the things we support aren’t permanent or object-based sculptures.

Where will the sculpture park be located?

The park will be located in Hyderabad, in a state called Andhra Pradesh, which is famous for the second oldest rock formations in the world. They’re 2.5 billion years old. The dinosaurs were 200 million years old, if that puts it into perspective. It’s a strange, rocky terrain — the landscape itself looks sculptural. But there’s a lot of new development, and people have been dynamiting these rocks, and we’re some problems on the legal side of things with the land. But I think having an open park would be a nice commentary against the developmental construction occurring. It’s actually going to be far out from the city. I was really inspired by Inhotim in Brazil — you have to travel for a while to arrive, but then the art isn’t polluted by other things around it.

Do you know yet what will be shown there?

Something we’re looking for is art that is contextualized to the location of India –so we’re not having the same works that we commission abroad brought back to our park – those works will be new commissions. With our activities abroad, the idea is that, through international residencies, Indian artists can develop their practice and figure out the complexity of working outdoors and then use these skills to create new, separate pieces here. As for international artists, we would like them to create pieces specifically for the location as well. It will also eventually be a university, and it will have a culinary research center, a performing art space — basically will be a sort of haven for people to learn about Indian art and culture.

Why is there a preference for the park being outdoors?

This is actually a huge issue. Basically, classes don’t mix in India. There’s an anecdote that helped me understand this. I was with an artist and I wanted to stop into an antique shop in Bombay, but he told me, “oh, I can’t go in there, they don’t let Indians in.” I don’t think this is still completely true, but there is this intimidation factor for elite spaces — so even though this artists is successful and has a great gallery representing him in Mumbai, he is still intimidated. A similar thing applies to illiterate people, you don’t see them in these spaces — and in Hyderabad, the literacy rate in the state is 67%. It’s important to reach people that can’t normally look at art. So if it’s outside, it’s a more democratic space, because people coexist outside.

Currently you’re in Berlin. Will you be featuring any German artists in the park?

You’re doing a residency here as well. What is that about?

The residency is for a public art project I’m working on in a mall in South India called Phoenix Market City. As I already mentioned, classes don’t mix in art galleries or museums, but they do mix in malls. About 50,000 to 100,000 people are expected to come through the mall daily — obviously higher on weekends — so that is a lot of opportunity for exposing people to art.

What kind of work will be featured there?

We will have four video pieces, which were all made in Asia, with the theme “Force of Nature”. There will be a full wall projection and also four floor projectors done in the style of Rangoli — which are these circular pigment blessing designs on the floors of Indian homes. We have also commissioned some sculptures. One artist, who is making a wall of flowers from thousands of common metal plates, is really interested in the disconnect between food production, consumption, and hunger. So often when you’re eating, the people who made your food are starving, but this idea of hunger is completely disconnected from the dinner table — and he is trying to make you think back to that. We have another piece on loan from the internationally famous Indian artists Thukral & Tagra. They made this huge sculpture of resin bottles that looks kind of like a Transformer, so it’s kind of like the monster of consumerism, and it’s about 3-4 stories tall — it’s huge. And then, for example, there is also the “Steps of Predicament” by Gigi Scaria. It looks like a spiral staircase from floor to ceiling, but made of these identical row homes — the attached suburban houses — and it talks about the danger of utopic middle class communities. So actually it’s great that we’re a bit critical of mass consumerism at the mall.

Has working in India changed your curatorial practice in any way?

I am concerned that I don’t want to be an “Indian Art” curator — I’m not interested in geography, I’m interested in the content of the work regardless of where it is coming from. I think there can be problems with a lot of these big India survey shows. They strive to look “Indian” — there are elephants, and loud colours, and street scenes. So I’m working really hard to not have the “surfaceness” of being Indian but rather sponsor and include artists who’s art makes sense from a broader perspective, for the depth of its content. I’m also trying to widen the sort of scopes of the projects that I’m involved with, so I can start including international artists and not be so geographically focused.

Natasha Klimenko is a writer and photographer living in Berlin. Originally from Canada, she received a BA in Cultural Theory and History from the University of King’s College, Halifax. Currently, Natasha is interning as a journalist at Berlin Art Link, working as a contributing writer for Artconnect Berlin, and assisting with film projects.