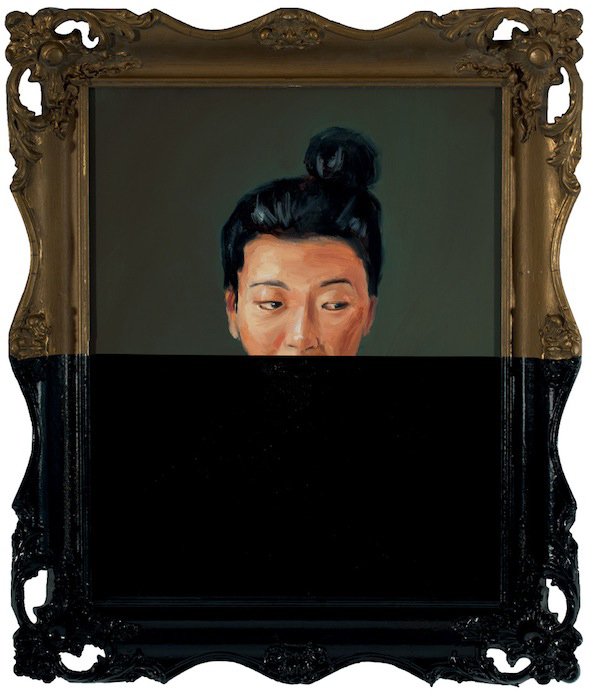 Oliver Jeffers – “Without A Doubt Part I” (2012); Courtesy of Gestalten Space

HERE OR THERE is predominately a portraiture exhibition, a space where Oliver Jeffers takes an anthropological approach in rendering subjects of various religious and ethnographic backgrounds. Diverging from his well-known illustration work for children’s picture books, Jeffers explores the chasm between logic thought and emotional impulse.

In a departure from his previous work that ropes in mathematical equations as a method to unravel the traditional portraiture conventions, in HERE OR THERE social satire and elements of the fantastic combine to create subjective renderings of the modern day condition. In a nice curatorial flourish, the artist himself handwrites the artwork titles and various quotes around the exhibition in chalk on the blackboard painted walls at Gestalten Space.

Three large scale, full body portraits comprise the backbone of the exhibition. In Saturday Morning By The Pool, an Islamic lady in a Burqa is seen adopting calling cards of the Western lifestyle; face-obscuring sunglasses, a designer handbag and an iPhone. A third arm protrudes from her traditional dress and clutches her phone, at once delineating a dependence on technology but also recalling the multi-dexterous goddesses of Eastern tradition. 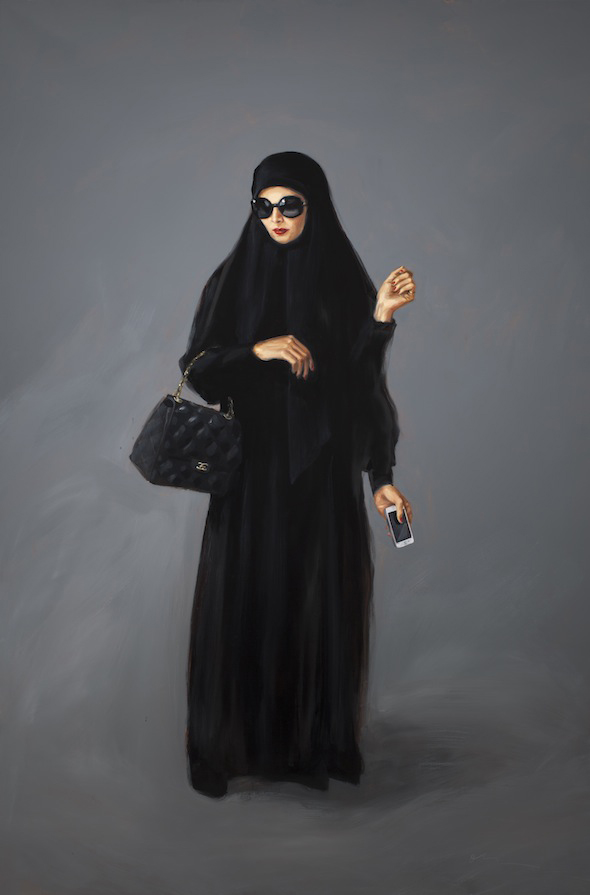 Oliver Jeffers – “Saturday Morning By The Pool” (2011); Courtesy of Gestalten

Another of Jeffers’ approaches to portraiture that I would have enjoyed seeing more examples of were his paint-dipped works. In Without A Doubt Part I, a bust portrait of an Asian lady is obscured from the chin down by black paint that the artist has dipped the work in, gilt gold frame and all. On the other hand, the two-part portrait series, I Have Trouble Remembering Names, uses real glasses as a physical accoutrement to their subjects’ visage; the mixed media construction of which is perhaps not as well realized as the accompanying works in the exhibition.

Punctuating HERE OR THERE is Jeffers’ take on the self portrait; a long rectangular mirror treated with oil paint. Inscribed with the explicit title of Self Portrait On Mirror, the artist leaves a void in the image to be filled with the eyes of the viewer. Jeffers’ self portrait is emblematic of his approach to contemporary rendering of the human subject, and raises questions of hybrid identities born of the modern age. 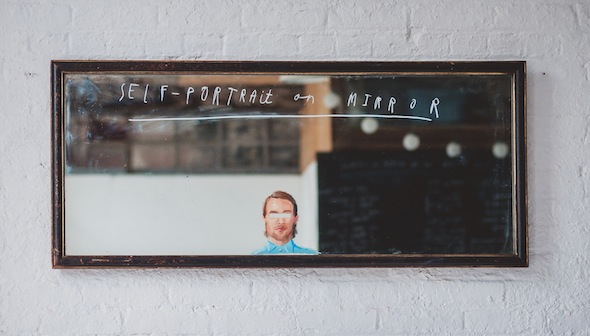 HERE OR THERE is being held in conjunction with the release of the Oliver Jeffers first monograph Neither Here Nor There. For more information visit: shop.gestalten.com/neither-here-nor-there