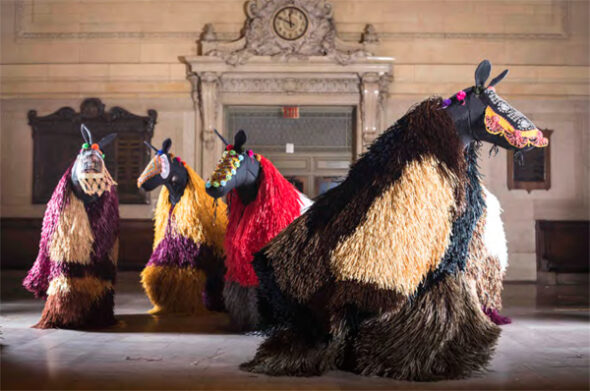 For HEARD•NY artist Nick Cave created 30 life-sized horses that will be on display in Vanderbilt Hall, that is, when they are not roaming around Grand Central and the Main Concourse. Each day at 11AM and 2PM sixty dancers from The Ailey School, the official school of the Alvin Ailey American Dance Theater, will don the costumes and perform special choreographed “crossings” for commuters and tourists passing through. One herd entertaining another.

“One of the things that makes HEARD•NY so compelling is that it catches people off guard,” says Creative Time Chief Curator Nato Thompson. “Coming across these horses is in itself an unusual experience, but it is all the more so in a place as majestic as Grand Central Terminal.”

The horse costumes, or “Soundsuits” as they are called, are made of colorful raffia and resemble African ceremonial costumes. They make a peaceful rustling sound as the horses move. Each horse wears an intricately embroidered facemask embellished with patterns from India, Tibet and Morocco, some with a baroque flare.

At the opening ceremony, after the dancers were suited up in their costumes, harpists Shelley Burgon and Mary Lattimore began playing while the horses started to shake a bit and come to life. Some of them roamed peacefully around the hall in small herds while others ventured over to the audience to investigate the children eager to pet them. Suddenly, tribal drums played by percussionists Robert Levin and Junior Wedderburn sent the horses into a gallop before performing a series of intricately choreographed dances with a surprise ending. This is a performance piece everyone will love.

Speaking about the project Cave says, “We used to be dreamers, thinking, ‘What would I like to be?’ But under the stresses of contemporary life, we seem to have lost that capacity. With works like HEARD•NY, I try to create a moment that brings us back to dreaming and fantasy, to a state of mind where we can think about alternate ways of being.”

HEARD•NY is free and open to the public. For more information, visit www.creativetime.org.

This article was originally posted by Liberation Iannillo on Tuesday, March 26, 2013 on Art Nerd New York.