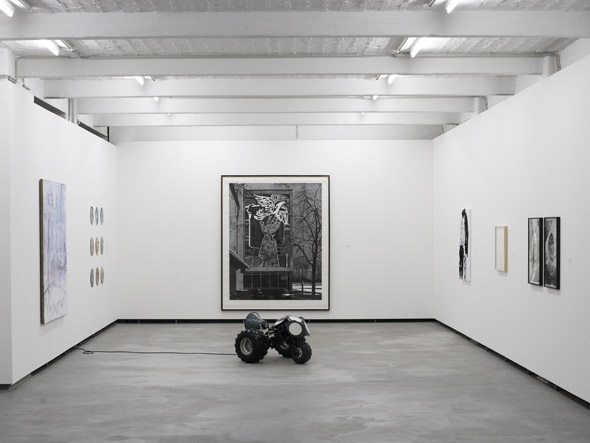 Berlin.Status [2] is the second survey by Künstlerhaus Bethanien of the city’s current artistic tendencies and trends. Over a year ago Berlin.Status [1] showed artists born between 1973 to 1980, but this year the crowd gets younger, featuring a set of artists between 1978 to 1984. Curated by Sven Drühl and Christoph Tannert, this show gathers over fifty artists whose works address the current artistic environment in Berlin.

Though already on the map a year ago, Berlin’s presence in the international art scene has grown even further this last year. With more influx of visitors deciding to stay, the city wavers under such issues as gentrification and pressure for strategic land use and housing policy. There is indeed an uncertain transition from the days of artist squats and bunker techno-parties to today’s rising rents and a booming gallery scene. Berlin artists are surely aware of this trend, and the ones presented in this show perhaps even lived through it. Their views and works in the last years presumably changed in reaction with, or likely against, the city’s changing face. This show is then a portrait of this reaction, a reflection of Berlin. 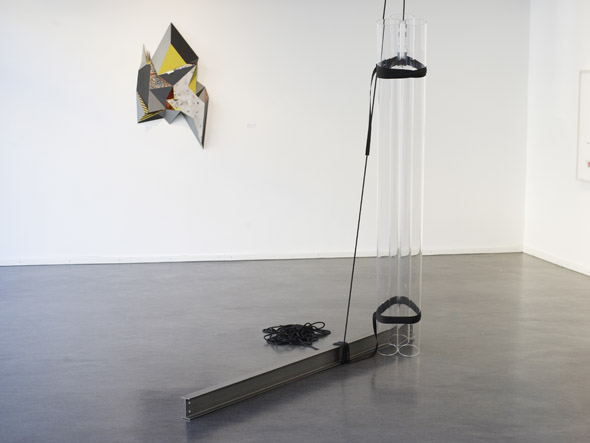 Walking into Berlin.Status [2] is not as overwhelming as anticipated. It is rather sparse, the entry space minimally filled with just three large-scale pieces: one sculptural, two hanging on the wall. My eyes are immediately drawn to Drift and Plot (2012) by Natalia Stachon, a sculpture composed of what appears to be found architectural elements joined together to create jarring lines and curious angles. A steel beam presses its weight against the floor; black rope from above hangs down and curls up into a useless coil. From there my eyes are taken upward to three balancing Plexiglas tubes, held almost vertically with what appears to be seat belts. Upon further inspection, the beam below actually rises up a bit, creating an unsteady angle that parallels the even more precarious clear tubes fastened somehow in space, their weightlessness contrasting with the heavy beam below.

In the next room, over fifty artists means dozens of canvases vying for attention, sculptures placed in corners (don’t miss the one above the door), and the constant buzzing of a sound piece further beyond. There are rare moments when an artwork deliberately points towards Berlin, such as Despina Stokou’s Berlin/Art Hate-o-Meter. The majority of the works seem to be asking broader questions, referencing everything from Boticelli to Atatürk. Many works explore the expanses of technology and art; such as Robert Seidel whose projection combines video art with sculptural forms, or Pola Sieverding’s dystopian video depicting a woman’s body, in high definition, convulsing from either struggle or pleasure. A few video works pair footage of broadcasting with obscured everyday images, such as Aleksandra Domanovic’s 19:30 (2010). There are also a couple of labor intensive works whose intricacy grab me: Dennis Scholl, with a mesmerizing work of pencil on paper, and Philip Loersch with ink drawings of Farber Castell pens. 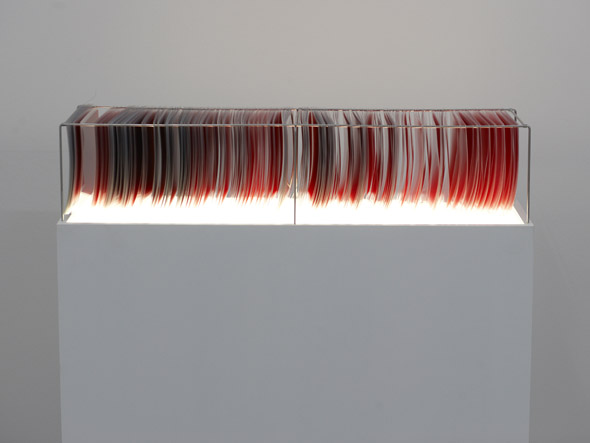 I gravitate towards a glowing red light, which turns out to be plastic slides the size of A4 paper, filled with red liquid, arranged in a filing cabinet form and lit from below. These dozens of red slides represent 250 ml of blood, the same amount of blood of a new born. But this is not blood. This is ink. The point: a liter of ink costs 528 Euros, while human blood only costs 200 Euros per liter. Artist, Jennis Cheng Tien Li, presents something curious in an equally curious way, one that immediately draws the eye with its aesthetics then begs the viewer to harmonize its construction and the information it conveys.

Across the room is a large-scale black and white photo of a car that has crashed into a tree with an ordinary newspaper clipping presented directly beside it. The lighting is eerie, the branches spidery and white, poking out against the darkness beyond. The car crumples in ominous half darkness below. With Unfall am Mittelpunkt (2013), Julius von Bismarck documents a car smashing into a tree trunk at the very center point of Germany. The newspaper clipping gives us the story, but the person in the vehicle remains unknown. As I stand there, oscillating between article and massive photograph, I am struck by how mundane the newspaper feels compared to the glowing tree of the photograph beside it. It has somehow a mythical quality, and I briefly wonder if it were von Bismarck himself who crashed into the tree, a kind of documented performance piece. Though I stand there alone, I feel the performance is still taking place––that I am part of it, persuaded to believe but filled with doubts. 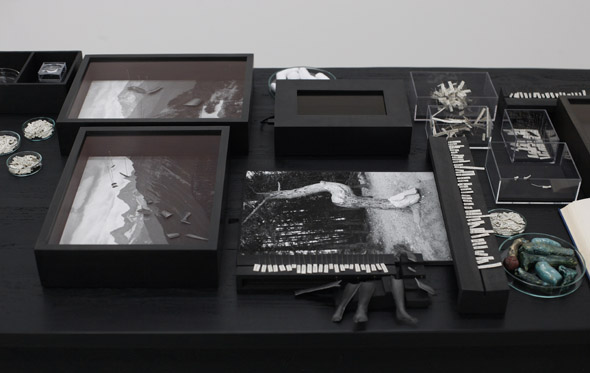 In the next room stands Emma Waltraud Howes‘ collection of objects meticulously arranged atop a high table, one that reminds me of Biology class. Ankyloglossia (n. Tongue Tie) (2013) is an array of text cut outs that scatter the table, mostly in piles, so that the entirety of a word is barely discernable, but always controlled within some form of containment. An open book, The Myth of Sisyphus, lays wounded with its many pages of missing text, stripped of its original meaning and left with a new story to tell. After further study, piles of small, white, chalky things come into focus all over the table; they are actually very small sculptural renditions of body parts. In some moments, the word arrangements form logical phrases, recalling those refrigerator magnets of random words put together to leave messages. While the scientific arrangement begs for questions, hypotheses, and attempts at answers, there is at the same time something poignant about the softness of the body parts against the rigid confusion of black and white text.

Presenting over fifty artists, Berlin.Status [2] presents a broad spectrum of interventionist thinking, image-manipulation, and the tendency towards low-budget materials. The works do not seem to follow an organizational pattern; no evident artistic theme occupies a certain room. For this reason and its overall scale, the show at times can be a bit jolting, moving from video piece to painting to sound sculpture on the floor within a couple of minutes. But in placing works of such a context in one space, connections are bound to surface and there does seem to be a common thread: a distrust in information as the individual fades out of focus and the role of a collective (or of a city) greatens. This consciousness of the city, though not specifically referenced in each work, exists within the experiences of these artists and their shared, current status in Berlin.