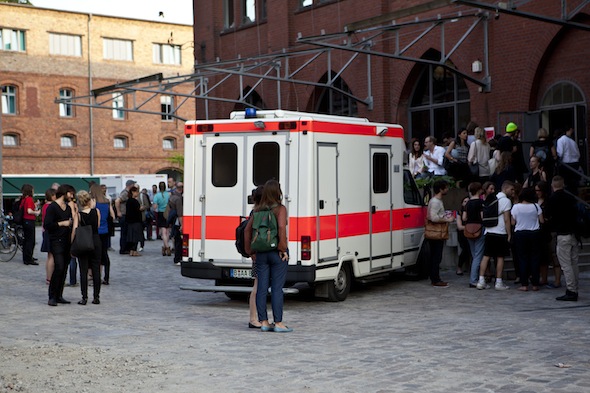 Fabian Knecht – “Nothing Is Bad without Something Good” (2012); courtesy of Institut für Raumexperimente

Silent siren lights turn on the roof of an ambulance. The doors of the car are closed, no medics are around. At the entry of the Institut für Raumexperimente curious onlookers are assembling, wondering what has caused this situation. What most people don’t know is that the ambulance is part of Fabian Knecht‘s art installation. Once again he has brought an intentional contagious feeling of uncertainty to whoever is experiencing his work, provoking an open question about a false situation.

The opening of Accidental Accomplishments presented a series of experiments by students who have participated in the last semester of Professor Olafur Eliasson´s class. The purpose of the institute is to re-invent the educational strategies of art studies by creating an equal atmosphere between students and teachers. The focus of their work is on discovering a reality related to our surroundings, the present society, and to cultural and geographic determinants. 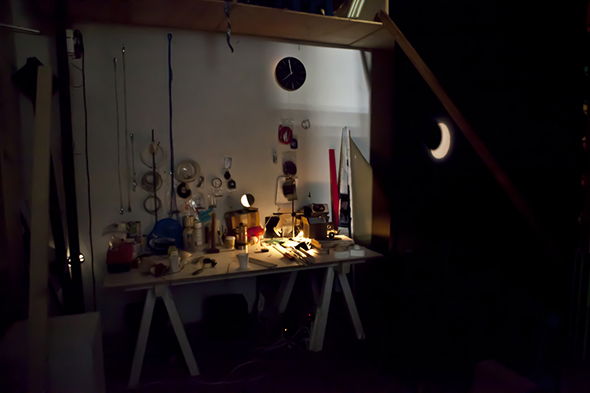 Presented in a labyrinth of darkness, light, sound and movement, the viewer is guided through the different experimental works. For example, Felix Kiessling’s piece presented an installation of a small workspace where the presence of time was reflected through contrasting natural and manufactured rhythms. Displayed over a desk covered with tools, a sphere tied to a string turns in an orbiting movement whilst a light projected upon it reflects its shadow imitating the different lunar stages. On the wall, the numbers of a clock rotate around while the hands remain static, while on a table below, another clock-hand attached to a block, marks the seconds. 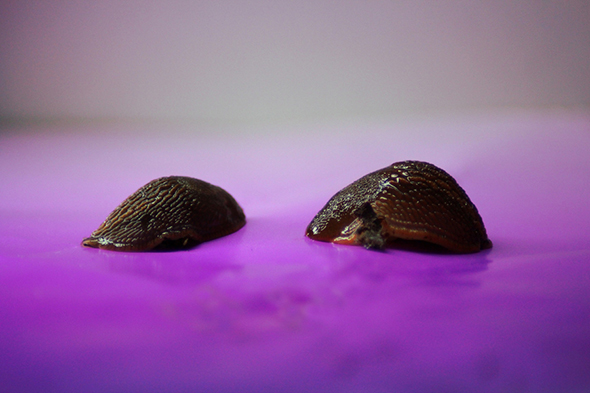 Walking through the black heavy curtains, Leon Eixenberger’s installation transports the viewer into a futuristic environment. He recreates the sense of rhythm, movement and light to a larger scale, a robotic structure whose axis is static, has its arms attached to neon lights which turn in circular transversal movements. The neon lights turn on and off at a steady rhythm, marked by a galactic sound. A dark passageway conducts the viewer to Hans Henningkorb‘s installation. The humid atmosphere created accompanies images on digital screens of biological reproductions of atoms and slugs. The viewer is driven to the center of the dark room where a tank containing slugs stands and a soft voice speaks about life cycles in the background. The work invites a sense of repulsion that is then balanced out by the scientific and biological nature of the work. 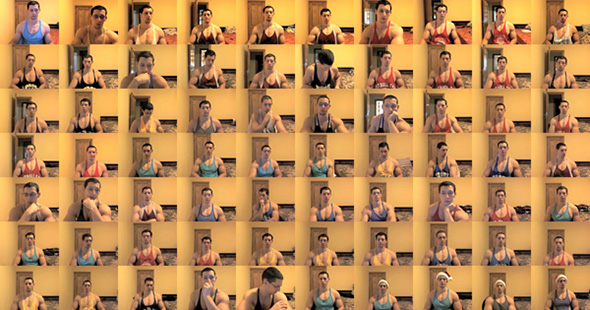 Other works include Hendrik Wolking’s webcam videos, projected in a mosaic like arrangement. The objective of his works is to highlight individual personalities and how they are influenced by the Internet. Nina Schuiki presents a piece dealing with spatial perception through different projections of light reflecting upon the wall.

Professor Olafur Eliasson has presented a collection of work revealing new ways of reading the reality that surrounds us. His efforts to translate the perception of time and space are evident in the works of his students. Time and space have been accentuated throughout the works leaving the viewers to pause as they present themselves in front of the installations and see themselves sensing. 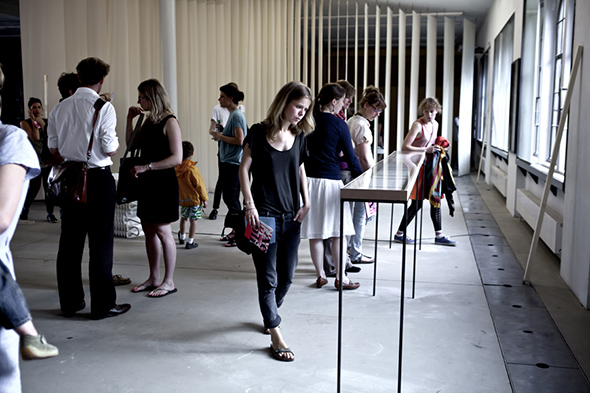 Alexandra Borras has recently moved to Berlin where she is completing her studies in Art History.