Sitting in Catherine Lorent’s Berlin studio in Wedding beside two grand pianos, a stack of Schubert scores on the bench (Schubert is important, she tells us), Lorent starts explaining Thrash Metal to us. Halfway through her sentence she suddenly bursts into the deep, strangely melodic growl of a rock singer. The parallel between the different music styles is uncanny, though Lorent explains that amid the harsh tones and chaotic aggression of Hard Rock one can find traditional music values of virtuosity, skill, and perfect arrangements. 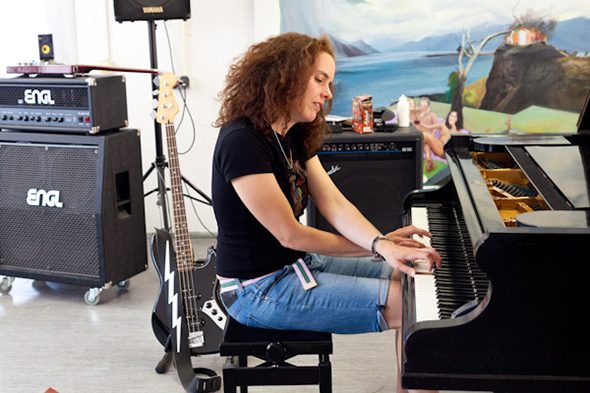 Her studio is spacious, open and full of things, not to the point of clutter or chaos, but rather a sort of entropy, things are spread evenly over the space and sometimes form unexpected aggregations. A bookshelf with a golden plastic teapot, a small pile of books, a plant, some electrical cords. Elsewhere, a tower of papers, some old paintings, a cup, a guitar on a stand. Her room reflects her installations, which are also spaces where she combines her life and interests in free-floating, instinctual arrangements. 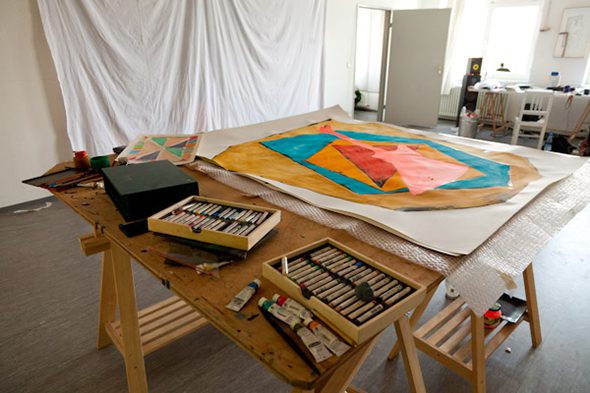 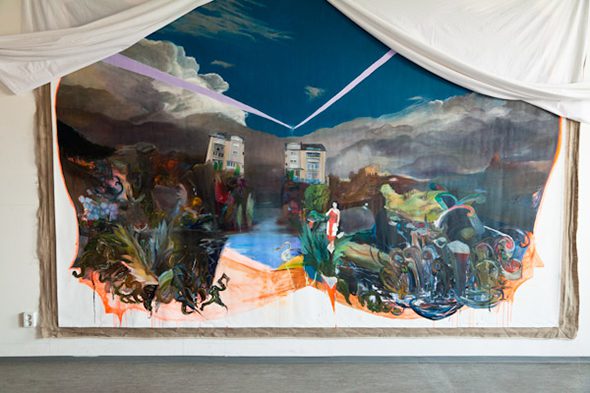 Right now Lorent’s studio is filled with fragments of art after the construction of her recent work at the 2013 Venice Biennale, representing Luxemburg, a mixed media installation titled Relegation. Seeing the limbs of her installations scattered around the studio is confusing: an unexpected assortment of themes and materials. Lorent’s works are arranged according to her own, highly personal language of symbols and significances that does not conform to a conventional, Western structure. Despite how difficult it is to access the subjective, underlying structure, her work is not chaotic, the presence of an order can always be felt. 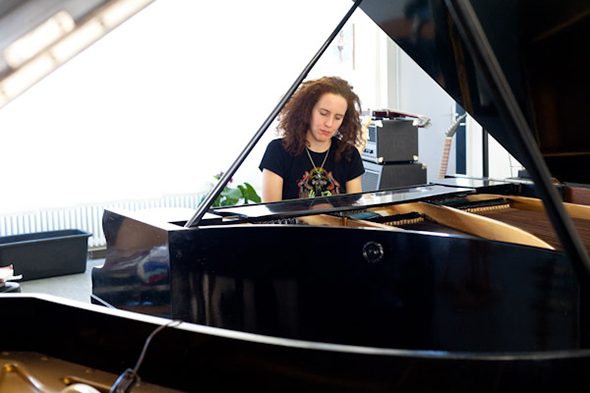 Lorent explains that Relegation is spread over several rooms: an interactive installation accompanied by a musical performance. In the five rooms of the Ca’Duca/the Luxembourgish Pavilion, large, busy multimedia painting is hung on the ceiling – referencing the Baroque tradition – with 13 guitars partly incorporated into the pieces. A number of sensors register the movement of spectators, sending signals to an interface that controls Ebows (electrical devices that vibrate guitar strings with magnets) creating a ghostly ambience. 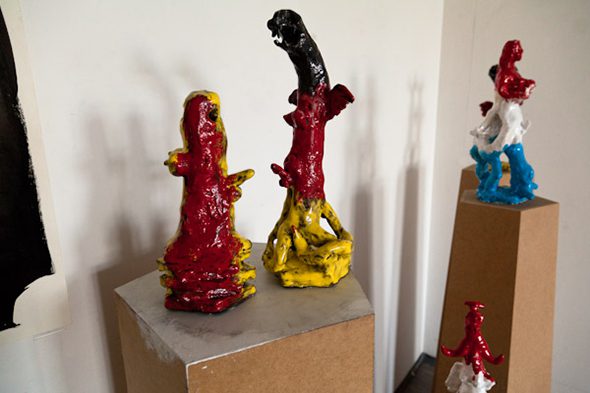 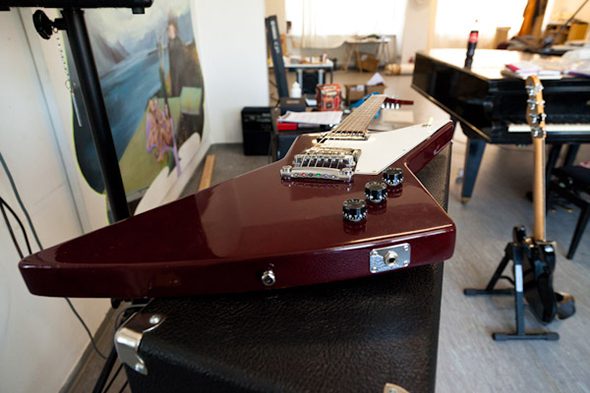 “Ideas travel like riffs in my head,” Lorent tells us, “like guitar riffs. Ideas translate through mediums, genres, and historical periods – through the rational divisions that we use to construct our reality”. Lorent is fascinated with these moments where unexpected parallels emerge and conventional logic is undone. The interactivity of Relegation allows the audience to experience their role as spectators in a very logical, clear metaphor: when they move, the art changes, producing different sounds. However, in a very Lorent-esque revelation, the illusion of rationality and simplicity is undone by the mysticism of the eerie, bodiless noise; the invisible electronic signals of technology become enigmatic. 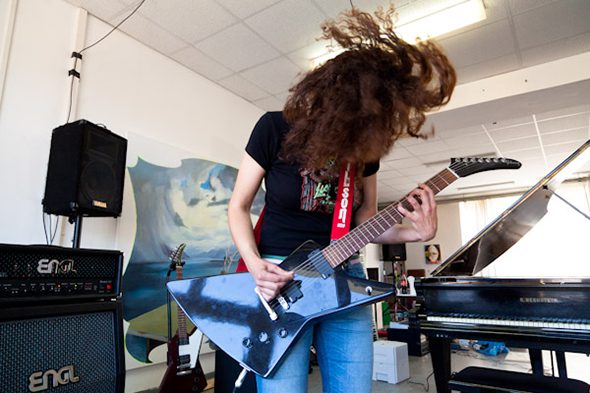 Lorent’s translation of 17th and 18th century art into the present reveals a disregard for the Western historical model, which is based on linearity and progression. She is drawn to Baroque heraldic crests, so she paints her own, modern ones, guided by a subjective selective process that stands out against the logical and conceptualist tendencies that seem to pervade the art world. She exaggerates the contours and thick lines of the Baroque era, painting with unmistakably contemporary materials; a mix of gouache, ink, pens, pastels, crayons, pencils, and swabs of artificially bright neon colours. Bringing the opulence and ornamentation of the past into the contemporary reveals that what we may see as contradictory – the physicality, sensuality and paradoxically strict virtuosity of the Baroqu e– can be contained within a single complex, and multifaceted work. 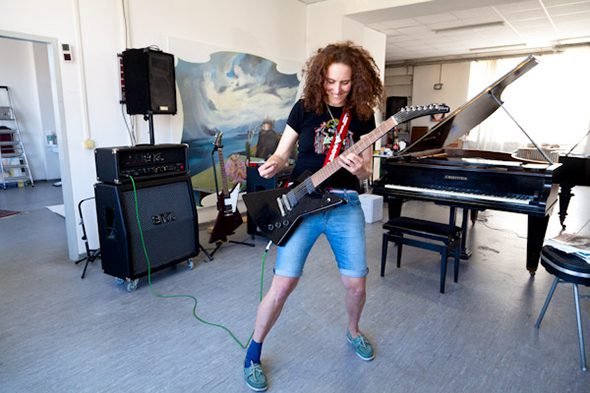 Lorent works within her own invisible frame in her paintings, leaving blank space where her images deviate. This forces the viewer to acknowledge the unpainted space and consider the incongruity between the disorder of reality and the hyper-rational rectangular frame that we see art through.

You can catalogue Lorents diverse interests from her art: technology, oil painting, multimedia art, skies, art history, classical music, history, thrash metal music, contemporary housing issues, religious allegories, the list is almost endless. Lorent thinks out loud that her art is too distracted, and vaguely contemplates limiting her passions. However, her art takes its strength from her unrestrained curiosity, her need to discover unexpected, underlying similarities in contrasting materials and themes. Technology reveals itself to be mystical, Baroque art and ornamentation provides insights into the post-modernist present, and Lorent’s impulsive mixing of mediums and themes reveals a simultaneous order and disorder.

Chloé Richard is a Berlin-based French photographer and a regular Berlin Art Link collaborator. Her portrait work is internationally published.