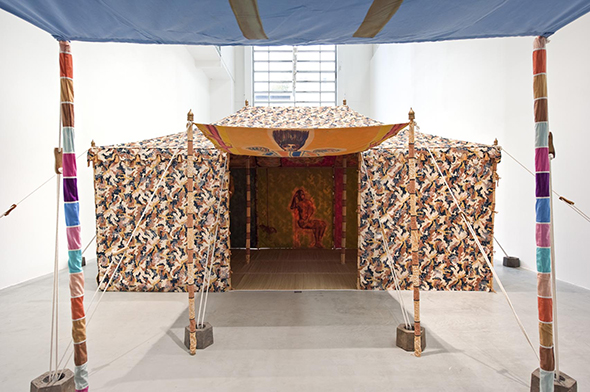 Introduction: With a career spanning over four decades, painter Francesco Clemente‘s ouevre is both stylistically diverse and thematically harmonious. His works seem to imbibe his diverse influences; from beat poetry to Tantric traditions to palimpsest’s, so that elements become reconciled rather than juxtaposed; a tendency which has led to his work being described as both “inclusive” and “nomadic.” The metaphor of the nomad is apt for Clemente, who divides his time between New York and India, and whose works are an expansive universe of histories, cultures and philosophies. For his latest show at Blain | Southern in Berlin, Clemente has installed vast canvas tents covered inside and out with elaborate paintings. It is difficult to describe just how different these painted environments are to wall or canvas paintings; they remind us that the latter has enjoyed a relatively short history. From cave paintings to churches, human knowledge and spirituality has long been tied to such spaces. We asked Francesco Clemente about these new works and what it means to surround the viewer with painted surfaces. 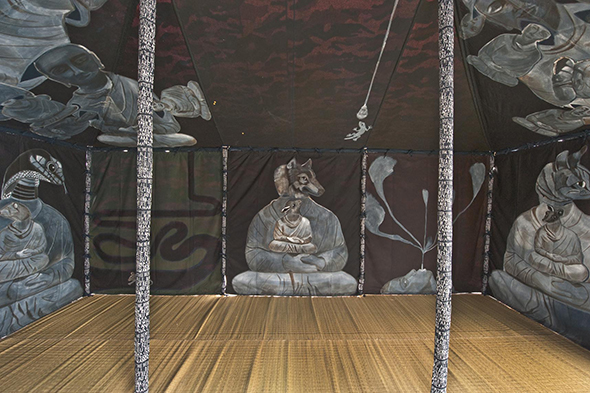 Jessyca Hutchens: Your “Tents” at Blain | Southern form a very immersive installation, but painting still underpins the work’s core since all surfaces covered in painted imagery. Inside the tents, I was reminded of other painted environments — painted caves, tombs with hieroglyphs, church frescos — all of these are also sacred environments. What do you consider to be the implications of surrounding the viewer with painted surfaces?

Francesco Clemente: All the ‘sacred’ places you mention have one other element in common, they are viewed in the dark. Most paintings in the past were meant to be seen in a dim light. It is the dim light of the womb, it invites to viewer to slow down. The viewer becomes part of what is being seen.

JH: Your tents felt like spaces for reflection and repose, especially the darker hued “Taking Refuge.” Did you design these spaces to be meditative?

JH: In you work you often combine Western and Eastern iconography, and reference different points in history as well. But it does not feel as though you are simply comparing and contrasting East with West, but rather that you are combining them in order to form an expansive unity. Do you seek to create a single narrative, albeit a non-linear one?

FC: I believe in inclusiveness and contamination. East and West have always communicated and inspired one another. And it is the capacity to absorb and to include the most diverse cultural patterns which has always attracted me to India. I made the tents, and much of my work in India. Often an artist doesn’t create a narrative but rather highlights a story which is already there, unseen. Diversity is what has kept the world together, and still does. I aim at showing the resilience of diversity.