Seated in his studio in Mitte, the shy but generous Stefan Kaminski speaks to me about his work. While I listen, I survey. The room is a smattering of emotional fixtures and patterned surfaces: the black and white dog on the sofa, the ailing wickerwork table, and the monstrous artworks which lean piled against the wall and just graze the ceiling. Everything is packed in around a single, battered leather arm chair. The stage and the actors are determined. 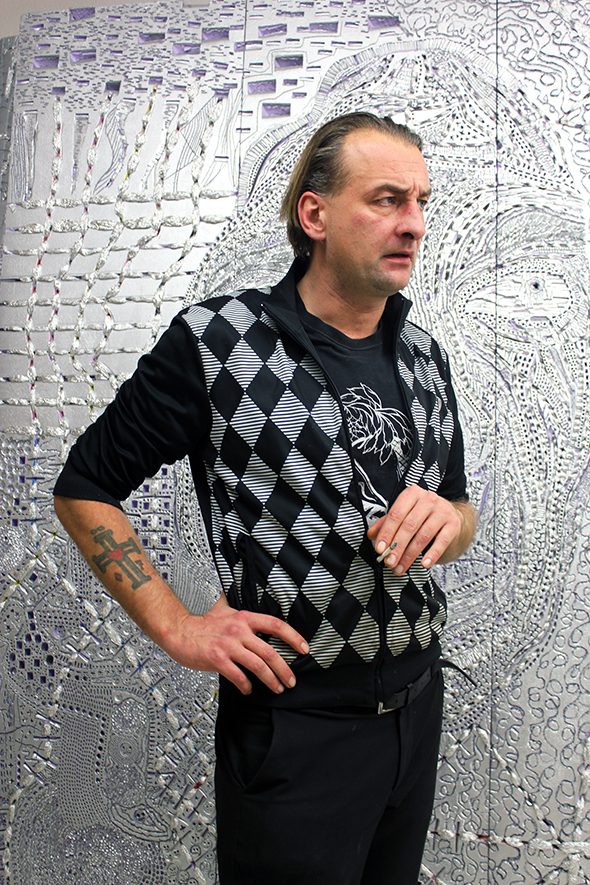 Kaminski tells me that he is interested in creating crowded and complex psychological situations with his work. That it takes him a long time to get to know folks but then, “sometimes you have no idea how connected you are to other people.” Therein lies the danger and the duality: how difficult it is to get closer and yet how fraught it is to be close. I ask him about the ornamentation in his work, his repetitive but specified use of mark-making. He says that ornamentation is a part of what keeps society together. I agree and find that the repetitive action, like culture and inner programming, gives us a sense of purposefulness over time. Pattern becomes a soft cushion to life, like the gentle touches in the room. The particle board floor is painted white and between the cracks are areas where the paint is thicker and has made itself into fatty pillows on the wood. I even see it in the table top with the wicker patterned surface or the old, dingy arm chair, which is a zig-zag of leather and buttons. I become sensitized to his environment and previously insignificant shapes and marks jump into definition. 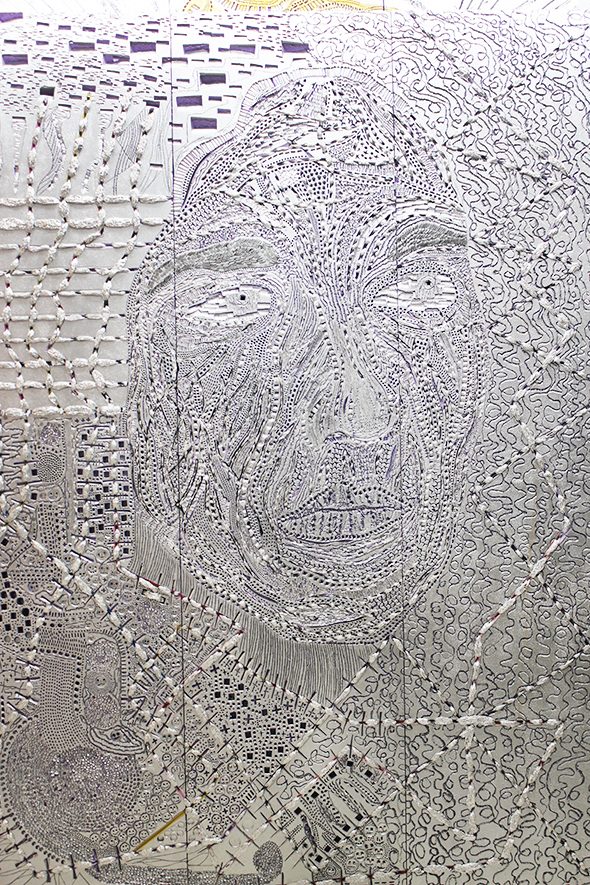 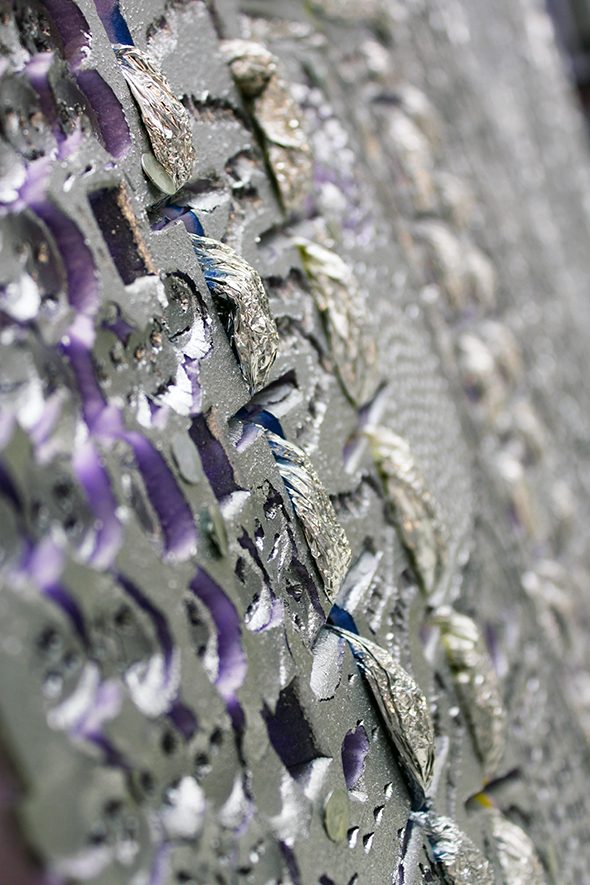 We turn to the work in the room and three pictures stand out. One is a large, golden drunkard laying under the sun. It’s a smooth marriage of materials and content: the historical staple of le déjeuner on the grass rips its way through a foil-y golden patina, exposing a block of pale purple industrial foam beneath it. Atypical of certain turn of the century pictorial themes showing the scope of luxury possible in a life of genteel poverty, it both nods to an industrial era labor class and a contemporary Taoist appreciation of nature. Basking in the golden abundance that is the sun, the drunkard becomes as revitalized and as close to the divine as one need ever be. It’s about gleaning pleasure from the “simple things,” an idea realized in gold and hewn, heavy duty industrial supply foam. 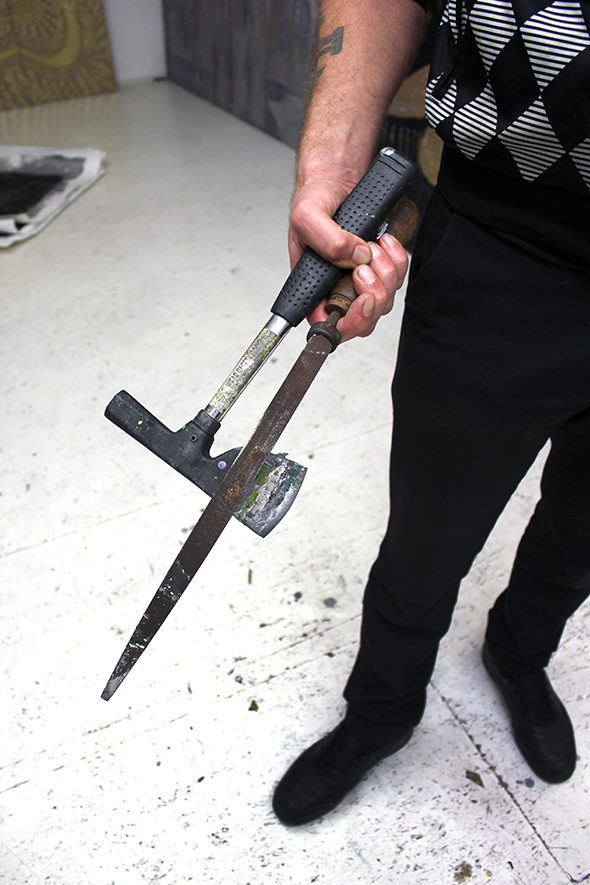 While his themes might be classical, what is more relevant is his approach. Kaminski, who is a boxer, has turned his attack of the surface into affection. A second work on foam with a silver patina is brought out. It is a patchwork of faces that overlap slightly but each face is carved uniquely into the surface by a manifold range of cuts: big holes next to littler holes, cross shaped, x-shaped, smiley-face shaped, and many a blunt object-shaped cuts are stabbed into the silver. All of these are driven into the surface in a controlled fashion, blanketing the work with a wide range of simple patterns. These marks gather in tiny clusters but the result is large format portraiture. The jagged texture of pock-marked skin reads as a metaphor for the burden of a painfully aware human psyche. As if consciousness were materialized in silver flesh, pulled out of the mouths of these poor creatures and stretched tight over their heads. Patches of the gravelly faces look like petrified wood or galvanized steel. Technically, the depth of the punctures and the use of positive and negative space is so carefully chosen as to be anal. Silver nails, tiny l-shaped wrenches, and a chain-like strand of puffy aluminum foil are all buried partially or fully into the hide of the foam, making the surface ache as the portrait of an organism but dazzle as an object. 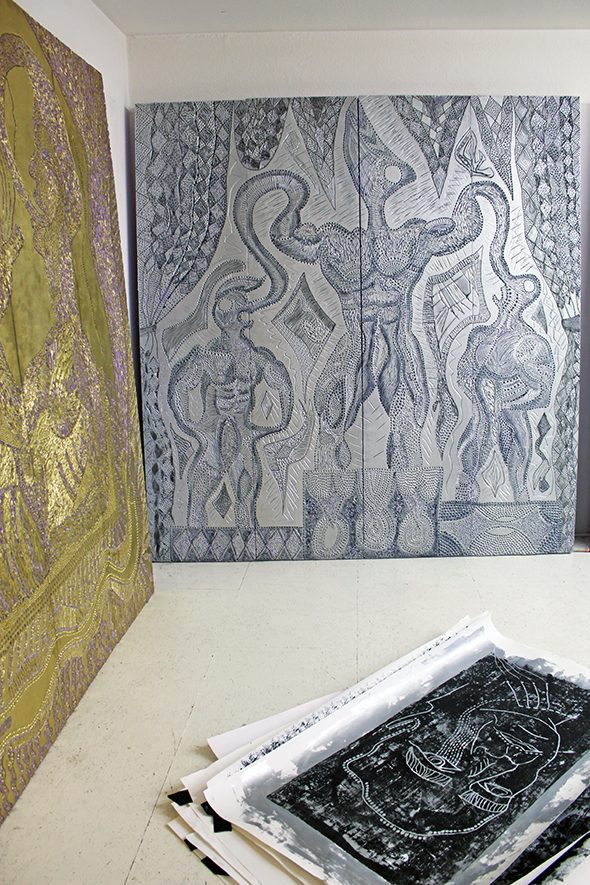 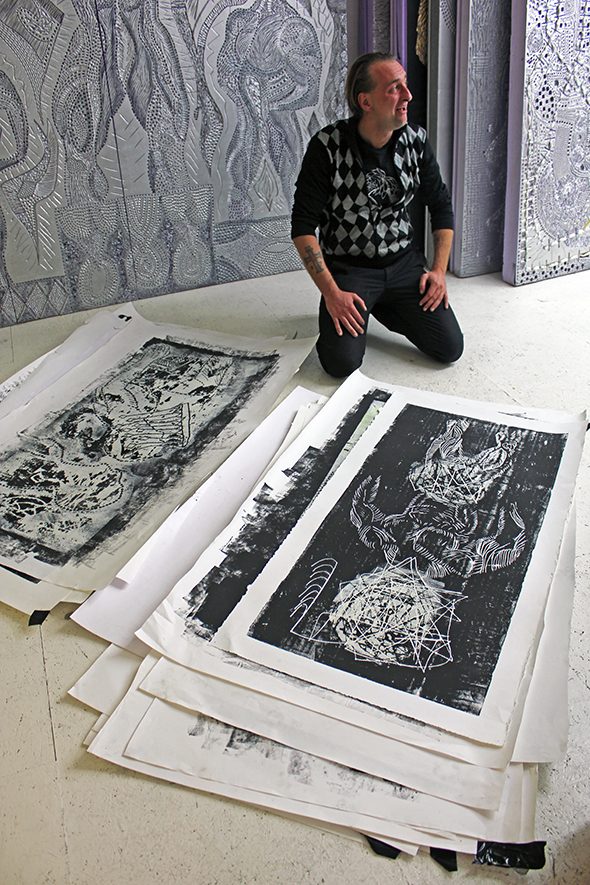 The patterns are unique and consistent among each individual head – indicating singularity and individuality- but the patchwork of faces is over-lapping, indicating a unifying experience. This could be Kaminski’s thin skin reading through, his vision of the melding that is common among emotionally empathic individuals. For those who overlap easily with others, this indicates a barrier to verbal language, the missing words describe the experience. It is more than an understanding of analytical or clinical psychology at work, it reaches into mystical and archaic territory. Perhaps the contemporary psychological definitions used to explain these feelings are just a stop-gap in time, there could be a new language on the rise to qualify this unexplored sensation. I imagine that these textured patterns act as personal guideposts for the artist. It could be that this work is a long story board about how to survive with people: who is safe to come closer to, whose skin is actually snake-like and whose is arousing. It does not necessarily make it any safer for the traveler but it gives a clarity to the experience which is otherwise (as of yet) unidentified in local culture.