Klara Hobza is diving through Europe. In 2010, she started by entering the Rhine through the North Sea. Over the next estimated 20 to 30 years, she will proceed through the Rhine to the Main, then through the Main-Danube Channel, down through the Danube, and all the way to the Black Sea. When she’s not diving, she finds time to propose shows like the current exhibition Great Expectations at Soy Capitán. Her artistic practice is very much a lived one, and this idea comes to the fore in the concept behind her exhibition.

Great Expectations features works by six artists and is centred around the theme of transformative experiences of life and death, clashes between nature and culture, the animal and the human. NEOZOON‘s video work Buck Fever perhaps most literally embodies the theme: it’s a roughly 5 minute composite of Youtube videos, shot by hunters as they’re about to kill their prey. The film registers the similarities in the found footage, following an ark from complete stillness to near orgasmic anticipation to triumph (the killing) to seemingly post-coital meditations on the rare beauty of the dead beast. The energy of the piece is dripping with expectation, as we know in advance the fate of the unassuming animals. 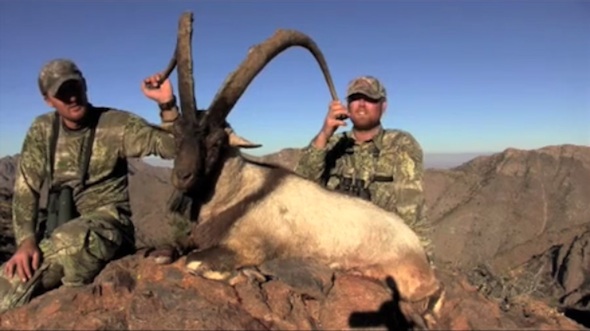 Benja Sachau – who recently wrapped up a solo show at Soy Capitán – addresses the theme in a much more conceptual manner. In fact, there is almost nothing to see of his piece Zeitliche Segnungsanlage, except two rigged bell-like apparatuses mounted on the walls directly outside and inside the gallery doors. Following the Fibonacci sequence, the bells will toll at timed intervals throughout the show’s month-long duration, eventually coinciding with one another. The anticipation of seeing this work in action requires an extended commitment that reaches beyond a short visit to the gallery. 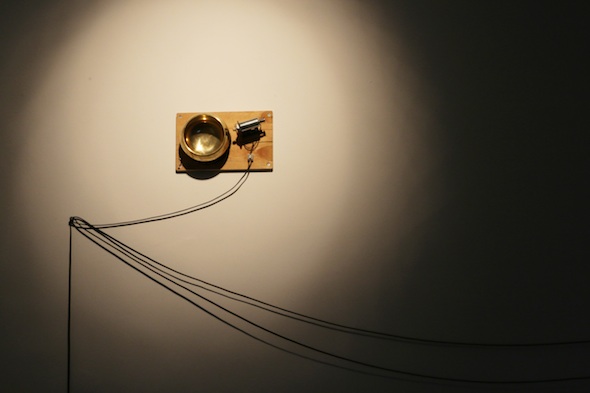 The imbalanced power relation between animal and human (or nature and artifice) is crucial to the conceptual development of the show. Dana Sherwood‘s photographs Nights of Coyote and Cake consider the connection between wild animals, like the pack of coyotes who stalked her yard in search of food one night, and their mistrust of humans. Sherwood made an elaborate, gelatinous meat cake for a pack of coyotes which, contrary to her expectations, was left untouched in her yard over four consecutive nights. This experiment was part of her research on non-human adaptability and unpredictability through several projects in which she prepared decadent meals for wild animals based on their preferred diet. The images, presented side by side, show a cake that looks like a vintage 70s American jellied salad advertisement and an out of focus, night-vision black and white shot of the artist and her dog examining the presentation in the backyard.

Established Swiss artist Roman Signer plays with our expectations in his video piece Kayak (2000). The film shows a man pulled in a kayak behind a truck, directly beside a riverbank. The absurdity of the situation, as the kayak grinds along the dirt road, is made even more stark by the interaction between the man in the kayak and the animals grazing on the side of the road. The herd of cattle starts to run alongside the truck, perplexed by this strange activity.

The whole show rests on the border between human and non-human life, and plays with our expectations as they are often disturbed by unknown forces. Klara Hobza’s presentation of the works in this group show reveals a well-thought out and critical conceptual basis that, to her credit, proves to be aesthetically consonant as well. 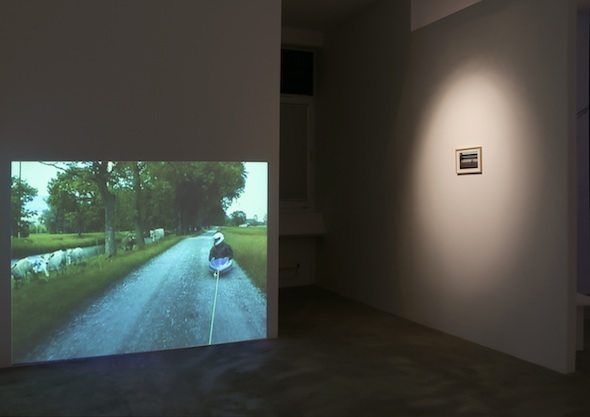