Imagine you’re a student milling about on your campus. Maybe you’re resting in the grass of the quad. All of a sudden, an alien life comes rocketing into the scene, and proceeds to scale the closest eight story building – sans equipment. If you were privy to one of Rachel Mason‘s earliest performances, Terrestrial Being at UCLA, then this death defying scenario can be counted among your precious memories. 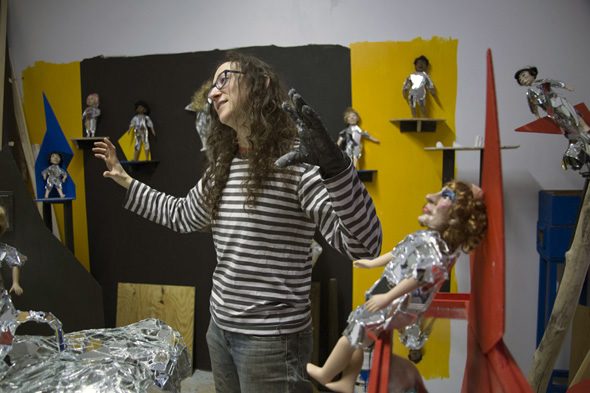 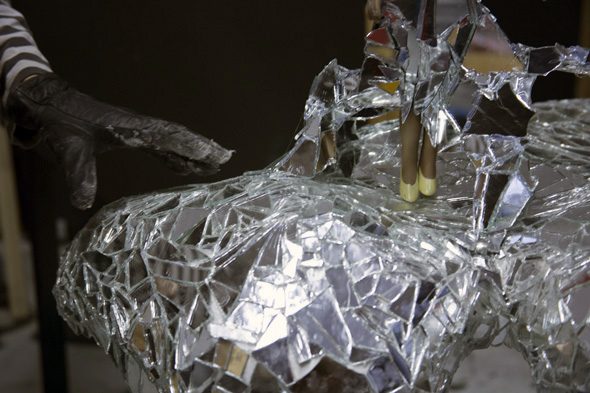 We recently caught up with the multidisciplinary powerhouse to talk aliens, other kin, songwriting, and sculpting the heads of warmongering politicians in her Brooklyn based studio, while she prepares for her show STARSEEDS at envoy enterprises. The precursor to Mason’s current body of work is a series of sculpted busts dubbed The Ambassadors, which began in the winter of 2004. Every political leader involved in a war within her lifetime was produced over a five year period, in which she also composed a song for them, and continued on to produce videos (mostly viewable on Youtube) as a collaboration with a network of artists playing out the leaders’ scenarios. “It was easy to write the songs – when I sculpted Hussein, it was at the time he was killed, and his last words read like a song already. They were so poetic. I performed each one in rapid costume change, mostly underground, but brought them to places like the Armory as well.”

In 2008, this intensive process brought the fantasy element of creating these busts from the sidelines into sharp relief when My Chechen Wolves, a song and video for the Chechen leader Dzhokhar Dudayev, went viral. Mason’s role switched to becoming an ambassador in her own right when she was invited to perform for rallies supporting the Chechen struggles against Russia. 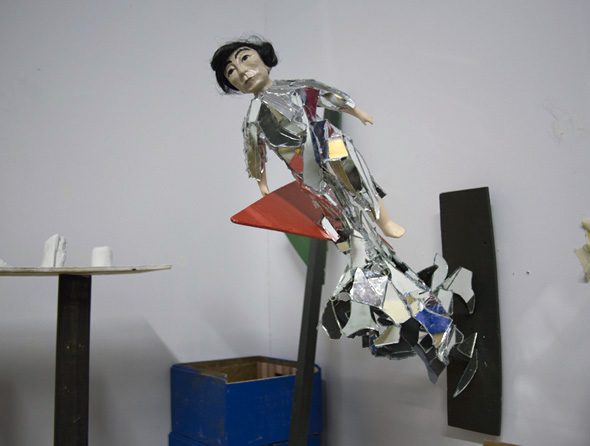 “Aside from this moment, I felt pretty ambivalent about the leaders. It certainly wasn’t a positive headspace to be absorbed into. And I’d notice that aside from sculpting myself, I only sculpted one other woman – Margaret Thatcher.” Looking out on her current work, a cast now entirely comprised of women staring back at us from different points of completion, Rachel recounted the shift from this intensive political embedment to a more lighthearted subject. After the cycle of busts was completed, an invitation was extended to be included in a show curated by the artist Chris Bogia, which was devoted entirely to Joni Mitchell at Kathleen Cullen Fine Art. This lead to a porcelain Joni, and a new train of thought.

Currently Mason’s studio is filled with female performers and artists recreated as dolls, with bodies encrusted in shards of mirror. There’s Missy Elliot, Joan Jonas, Etta James, MIA, Eva LasVegas… We all mutually swooned over Laurie Anderson. The floor is a bit like a battle zone itself, and the artist warns against improper handling of these uncanny celebrities. “When the art handlers come, I’m going to have to tell them to bring some heavy work gloves, none of that white glove stuff here.” The aim for these works now adorning the walls and a maze of sculptural platforms was to create an audience of women who greatly influenced Mason, either personally or through their work. The construction is always done unconsciously to avoid didacticism, and the result is a meditation on all foreseeable aspects of each character. “Now in some of my new video work, I’m singing as if I’m doll sized. That’s the ultimate goal, if I had to editorialize. If I perform, I want these people in the audience. I’m performing for my heroes. But if I started out with that thought, I’d have to switch it off. I have to work intuitively.” 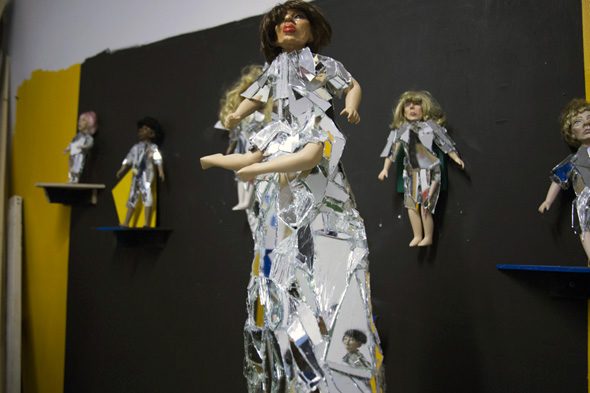 In the screening room of envoy enterprises, you can witness the end result of this process, a recording of Mason – front woman for the doll group (set up to mirror a shot from the band Die Toten Hosen) – her musical stylings like a vintage future-minded rock ballad vocalist. On days that she’s not performing in a gallery, you can also catch her singing with Little Band of Sailors. Employing a psychedelic folk inspired feeling, their surreal narratives capture more romantic and strange scenes. Music and performance are binding themes for each of these projects, and playing with the band is a chance to showcase that creativity apart from more political statements. This project also crossed back over to the realms of video recently with the completion of The Lives of Hamilton Fish, a historically themed rock opera based on a newspaper editor who becomes intrigued by two characters, both named Hamilton Fish, who died on the same day. One is a statesman and the other is a serial killer, and it is with the introduction of these characters that another theme is evoked: the lethality of political figures. 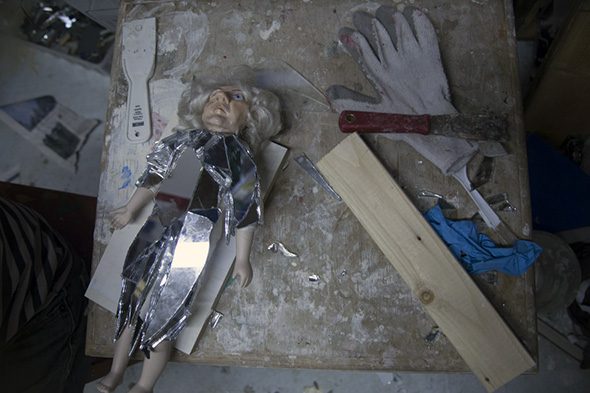 The Ambassadors and Hamilton Fish are coupled with Future Clown, Rachel’s creation that allows her to take on the Internet. “I made this character Future Clown that can exist there, and change the course of what happens. It’s another entry point.” To continue a dialogue about what it may be like to have the executive power to instate marshal law, Mason – dressed as Future Clown – turned her sights on Rand Paul‘s 13 hour filibuster detailing his staunch defense of Americans’ right to due process, and his refusal of drones patrolling US grounds. A quote from the filibuster has Rand Paul stating: “When I asked the President, ‘can you kill an american on american soil?’ it should have been a resounding and unequivocal no. The President says, ‘I haven’t killed anyone yet. I have no intention, but I might… Are we so complacent with our rights?… Government will not always be run by angels… There was a great deal of fear over having a king, so we limited the executive branch.” There is certainly an inherent fear that we may now be even closer to the situations of other countries that have become inspiration for Mason’s first sculpting project, but the hope for our country is that anyone can speak up about our government’s decisions, and prevent the worst outcomes, even if you’re wearing a funny hat on YouTube. She also managed to take Future Clown on the road to the Senate while in Washington on a teaching gig at the Corcoran. Dressed in full clown regalia, she stepped out of the Internet and into the forum for our government’s decisions – a second instance of her art crossing boundaries (reflecting Laurie Anderson’s stay at NASA). 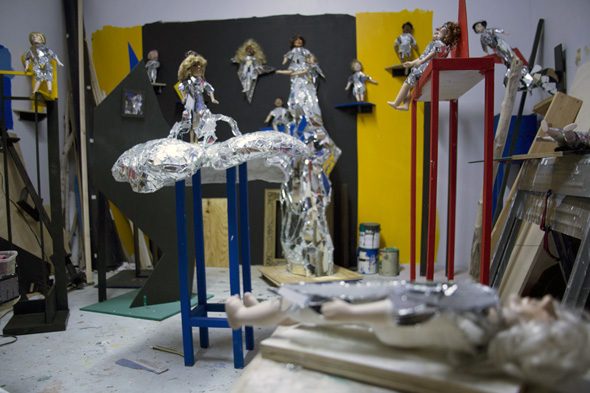 Along this intuitive journey of character creation and cruising online, Rachel came across the namesake of her upcoming show through the chat forum Otherkin. Mostly for teens who believe they retain the spirit of another creature locked within their human bodies, it’s like a mixer for reverse Furries. They console each other about phantom wing pain and their lust for vampirism. To Mason, this community is like “the wild west of the Internet. I find these communities to chat with, and eventually befriend. Then they led me to another community which I thought was absolutely perfect – that was Starseeds.” This second community is one that believes they have alien souls, and that they are stuck on this planet. Looking around the studio at glimmering reflective shards everywhere, taking note of the Terrestrial Being performances, and the recently lauded Future Clown character, you can see how these intuitive connections form a solid working narrative that stands firmly against the abuse of political power and earthly status quo. The buoyant energy of her persona is infused into every object in the studio, down to the simple helmets she used to perform in, and one wouldn’t have any difficulty seeing that in stark alien contrast to a grey suited majority. 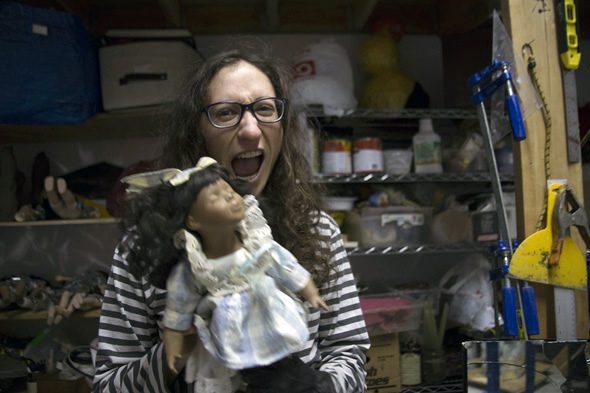