In his recent channels of work, Przemek Pyszczek has painted with concrete and ripped apart playgrounds. As hardcore as this sounds, his bright studio in Schöneweide features friendly knots of primary-colored pipes resting in one corner, and opposite, a canvas with waves of sherbet hues leans against the wall. Pyszczek’s use of a variety of aesthetics and materials is the outcome of his recent focus on the contemporary urban landscape of Poland, where he was born. 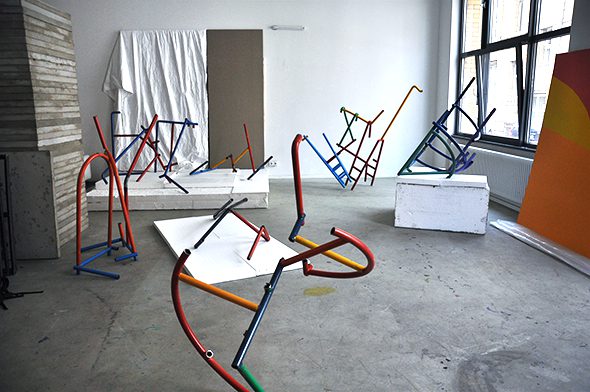 Pyszczek moved to Winnipeg, Canada with his parents and brother when he was two and a half years old, and the rest of his extended family stayed in Poland. But his first time back wasn’t until he was 15. For the first time, he was seeing some family members and a country with which he was supposed to have some intrinsic attachment. Pyszczek speaks Polish with his family, but there was still, as he says, “this idea of displacement and fragmented memory.” The next time he was back in Poland was eight years later, and two years after that, in 2010, he moved to Berlin. 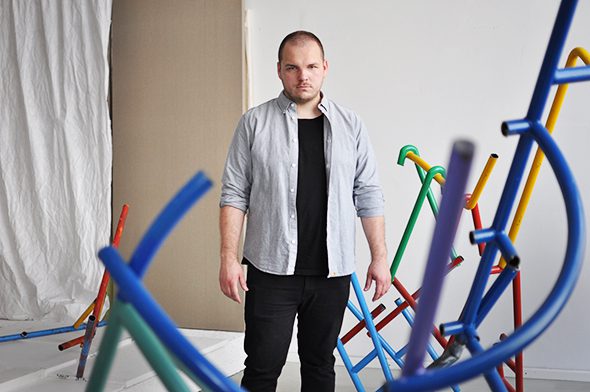 During his various visits to neighboring Poland, he began to notice, informed by his studies in architecture, the urban aesthetics of Poland. He especially observed the Plattenbauen type of housing typically associated with Soviet-era communism. These buildings come in pre-cut concrete slabs, meant to be assembled quickly. Since many of these Plattenbauen were rapidly constructed during the post-war housing shortage and lacked proper insulation, renovations were increasingly common. With renovation, however, came a strange trend of massive graphic designs on the sides of these buildings.

Pyszczek found himself taking photos of these buildings, interested in their form, aesthetics, and larger cultural meaning in terms of societal structure (this construction method was also used to build hospitals and schools). Pyszczek flips through some of his photos, showing one building designed to look like a ship from different angles, and another with a giant fuchsia butterfly pictured next to a tulip. “It looks like a kid drew it all on Microsoft Paint or something,” he says. “That’s the feeling that I get from them. But then there are also facades that look like modernist paintings.”

Pyszczek tells us an interesting detail: “I talked with my dad about these buildings because he used to work in construction, and he said, ‘Oh I actually used to build those buildings. Four of us would go to work and in one day we could finish one floor of a building.’” 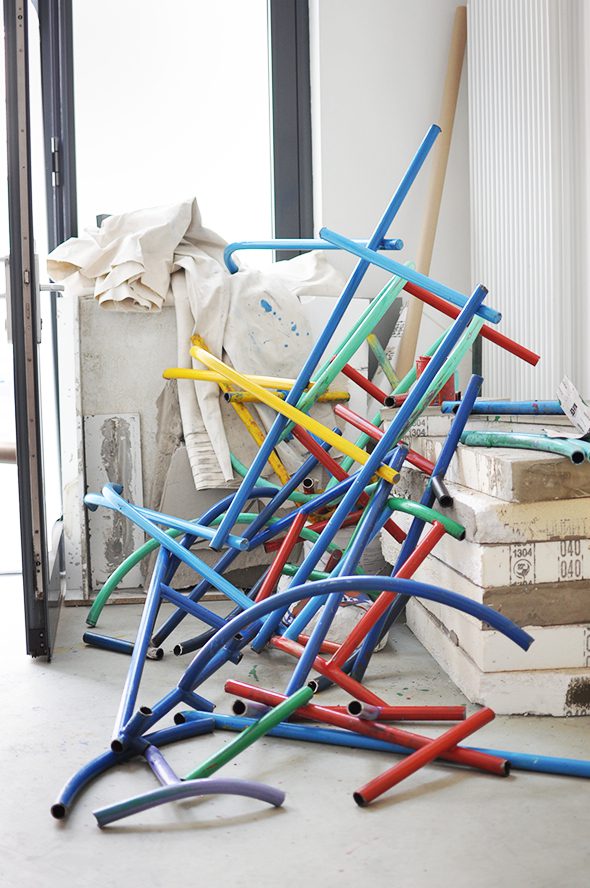 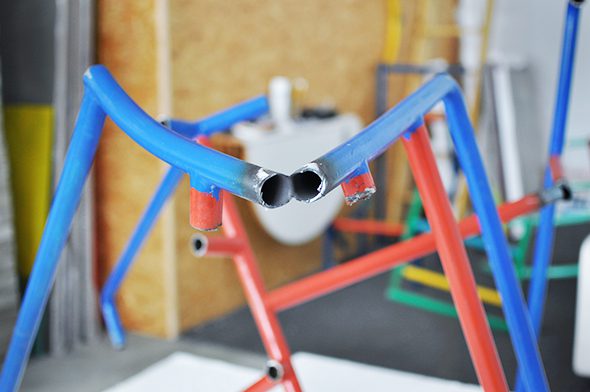 Another fascinating aspect of the randomness of these graphics, explained Pyszczek, is that this “vernacular aesthetic isn’t planned by designers or architects, but comes from the person doing the renovation of the building — someone like my uncle, who is a contractor.” When he asked his uncle more about these enigmatic, cheerful images and the designing process, he flippantly replied to Pyszczek that they would just whip something together. Pyszczek explains, “Basically, the whole urban landscape is being determined in this haphazard way.”

A strange paradox became clear in these buildings: they are the epitome of factory-made conformity, but from these exterior paintings and the rise in popularity of custom-made security bars in these buildings, people come to recognize their home as distinct. What attracted Pyszczek was that “in a way, people want to essentially lock themselves into this cage to protect themselves. But then they want to express some sort of unique character as well.” 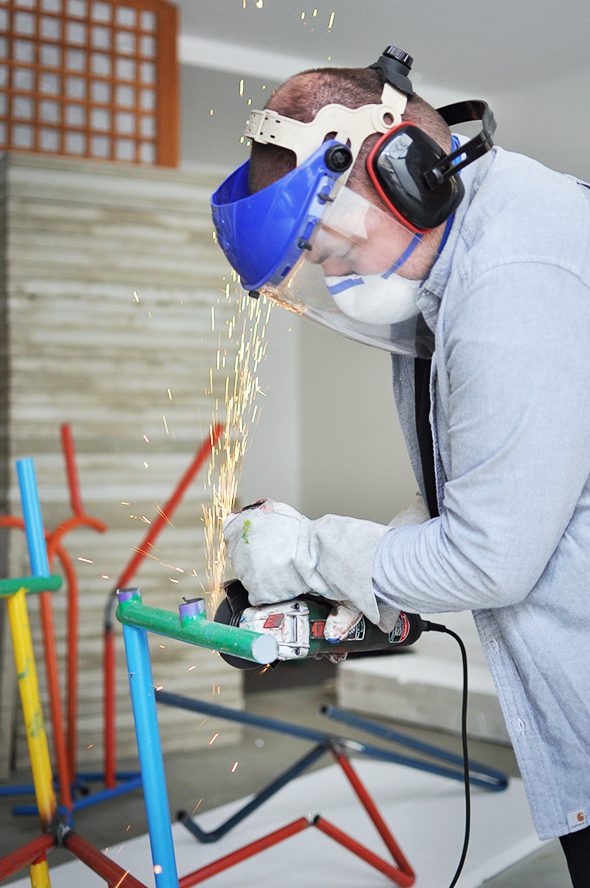 Pyszczek had been making paper collages after these found images of buildings, and this juxtaposition of security bars and child-like graphics led to his series titled Facades, described as a “sandwiching” of the two aesthetics. Two paintings in his studio feature different close-up sections of the butterfly image, the finished one overlaid with smooth white security bars.

Pyszczek was also inspired by the materiality of the building. He began to survey the original standardized concrete slabs and the outermost stucco that came with renovations. He fused linen and concrete, two materials that are opposite in many ways, the former existing frequently in an art context, the other in a built environment. He adds, “When I work with these materials and encounter this physical process, I feel a connection to what my father did in building these structures.” 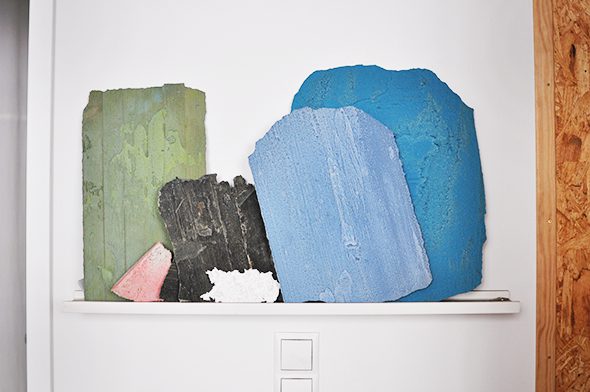 Pyszczek is most engaged when speaking of others or his surroundings, not himself. When he speaks about his interest stemming from the Plattenbauen, he says, “it’s something that’s part of my personal history and part of my memory, but also part of the fabric of history.” His fresh work is quite personal, but is essentially unselfish and based in the desire to share his curiosity. It’s hard to pinpoint an artist or human who can make research of concrete blocks energetic and compelling. But Pyszczek’s incredible narrative of activating and digging into the meanings of these structures is only half of the amazement — the rest is his art. In seeing how many different creative paths he has forged with a single concept, dead-ends don’t seem to be a possibility for Pyszczek.

With each idea inspired by this sociopolitical and physical structure, Pyszczek says, “it branches off into other areas and explorations of this building typology and this urban space.” For his latest and quite dynamic work, he targeted another structure — the jungle gym. 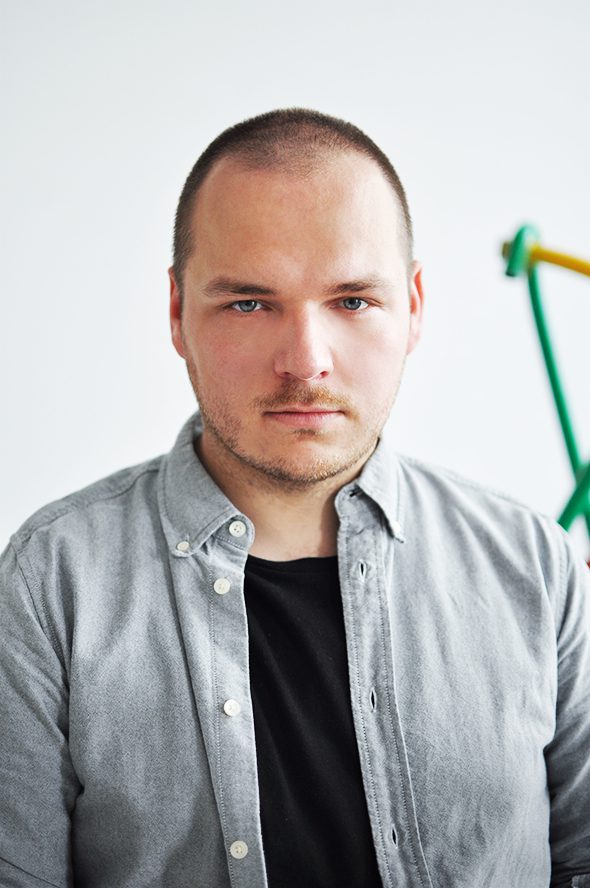 His fascination stemmed out of a vague familiarity and memory of the simple metal playgrounds — the giraffe, ladder, and spiral shapes — and ordered playground structures from metal workers in Poland. He only showed the workers a photo — no measurements — yet received his playgrounds just as he imagined. Then he began to rip them apart.

It was almost cathartic, he explains, “like pushing the past away.” Comparing it to expressive painting, he describes the deconstruction and reconstruction process: “It’s like picking the petals off a flower. There’s no rationale to it … it’s a reaction that’s invoked from within.”