In a tragic but somehow beautiful turn of events, Otto Piene passed away, at the age of 86, on July 17th, the same day that his major retrospective opened at the Deutsche Bank Kunsthalle. Fortunately, he was able to see the opening of his light projections two days prior at Neue Nationalgalerie.

Piene grew up in Germany but spent a large part of his adulthood in the U.S. He taught Visual Studies at MIT and the University of Pennsylvania in the 60s and 70s. When you encounter his oeuvre, the visual and conceptual impact seems very rooted in that time and place. Piene was clearly preoccupied with the spatial possibilities of art: the sky was often his canvas, and his air and light-infused projects mirrored the concerns of the Anglo-American DIY generation of which he formed a part. 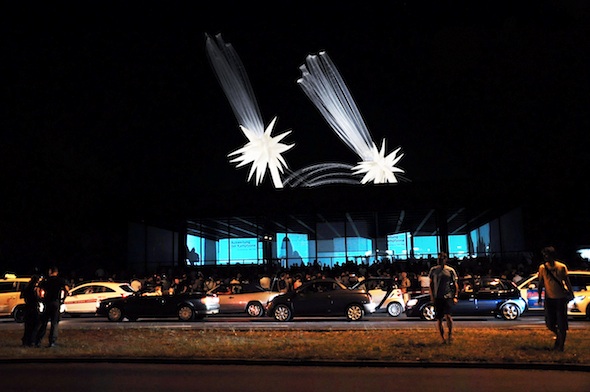 Architecture collectives like Archigram and Ant Farm, inspired by neofuturistic architect Buckminster Fuller, were active in the introduction of natural processes and elemental phenomena into the field of architecture. New geometries informed experimental design, and many projects became launching pads for probing new spatial possibilities.

Piene’s work fits within this movement, as even he acknowledged when he referred to himself as an “artist-planner.” The more large-scale “Sky Art” pieces – like his Regenbogen, made for the 1972 Munich Olympics – aim to blur the boundaries between public property and art. The idea of the “commons” – referring to those natural resources which are owned in common by everyone, like the air – seems fitting as a retroactive explanation for his continued interest in the political potential of natural environments. Echoing an almost utopian dream, now that there is very little of the planet that remains unprivatized, Piene once remarked that “the airspace is the only environment that offers mankind almost unlimited freedom.”

Last weekend, the Neue Nationalgalerie showed a rarely seen Sky Art work by Piene, on the roof of the aesthetically stark Mies van der Rohe building. The event was moving in a number of ways, given the context and the fact that this display had been Piene’s life long dream (which sadly he did not make it to see). The projections inside were played a intervals, speeding up while, hauntingly, the audio of Piene’s instructions to the projectionists played on speakers. The sound was used at a time before projections were digital, but has now become integral to his piece, almost as a poetic incantation. At midnight, the inflatable stars rose above the museum as hundreds of people looked on.

The whole feel of the Sky Art event, and the exhibition at Deutsche Bank Kunsthalle alike, is very much tied to the discourse of its inception. As Olafur Eliasson describes Piene’s work in the catalogue (echoing a very Heideggerian word play): “Otto pushes the world. Piene’s work is not pictures of the world. Otto’s work is worlding. Piene worlds.” The aesthetic is tied to a political ideology of the time, displayed comprehensively in the recent Whole Earth exhibition at HKW. In the exploratory pre-digital age of the 60s and 70s, a certain fascination with universal expansion seemed almost inexhaustible. Piene’s work is clearly a response to that, making it a relic to a dream of a future that never really took off.

In the exhibition at Deutsche Bank, we are taken through the various stages and subjects of Piene’s artistic oeuvre. From oil painting, to smoke, to light, and finally to the sky, the show’s organized approach is what you might expect from a large, mainstream institution. But it seems that Piene’s work cannot – or perhaps should not – be contained in this way. His work is dynamic and far-reaching. While the works on canvas fit aesthetically in the space, the documentation of Piene’s more grand displays paled in the context. Some of the light works offered an interactive and immersive scenario, but many were timed to start only every 20 or 30 minutes, so it was not always possible to catch them in action.

Despite the spatial confines, it was thrilling to see such an exhaustive archive of Piene’s work. In combination with the Sky Art event at Neue Nationalgalerie, the exhibition offered a clear picture of the artist’s concept, philosophy, and realized projects. Otto Piene’s work reflected the excitement of its historical context, enlivening the present with some long-lost idealism.