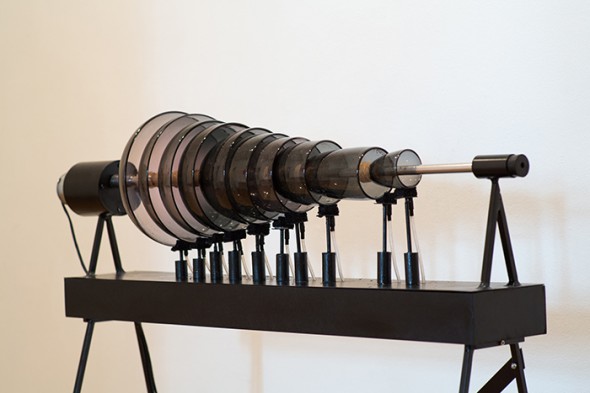 Twisted decor, intermittent flashes of light, a life-sized, blow-up fighter jet, and a whole lot of black and white, with a cacophony of soundtracks growling in every room. Just another day at a Berlin club? Nah, it’s was Berlin Art Week. Horizons, Margeurite Humeau’s show at Import Projects, is a visual and auditory science fiction opus whose four rooms in a Charlottenburg altbau take its audience through the occult, the historic, and the subterranean microscopic.

‘The Opera of Prehistoric Creatures,’ part one, is a sound-sculpture emitting a synthesis of noises, based on the fossils of extinct species and the animals who descended from them. This came out of Humeau’s work with paleontologists, vets, surgeons, and various other members of the medical community. The piece’s inhuman groaning and heavy breathing sounds at points like a bellows, which is fitting, since the sculptures’ twisted shapes do look a little like entities that would have been originally forged in some fiery crucible. It’s hard to distinguish which guttural yelps come from whom in ‘Entelodont, ‘Hell Pig’, – 25M years ago’ and ‘Mammoth Imperator, -4,5M years ago,’ the two creepy, noisy sentinels reminiscent of a dragon head, a maimed human ear, or body parts belonging to Falcor of a “A Neverending Story.” 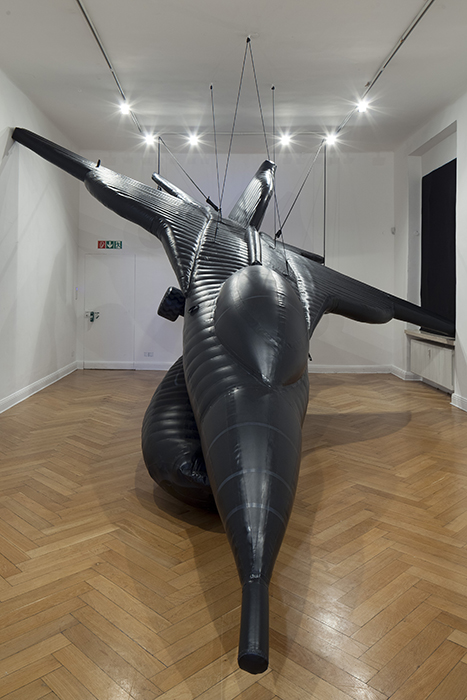 No matter the physical impression they give, the sculptures and their music together are meant to evoke both the ancient past and the present, which they do admirably, appearing and sounding birthed from a moment just before the catastrophic end of a species, or the dawn of a new one.

Speaking of species, ‘Prop 1,’ Humeau’s full-size inflated black PVC replica of a fighter jet, will eventually be crashed into the ocean next to Antarctica, part of an effort to communicate with “extremophiles,” unnamed organisms living without air or light in underwater volcanoes near the Antarctic ice cap. In the meantime, the blow-up fighter jet is suspended from the Import Projects ceiling, complemented by grinding, doom-filled music and sharp flashes of blue light. Whether or not it succeeds in its real mission, ‘Prop 1’ is the coolest piece in the show, taking a harmless nosedive into its audience while accompanied by a soundtrack ready for Berghain. 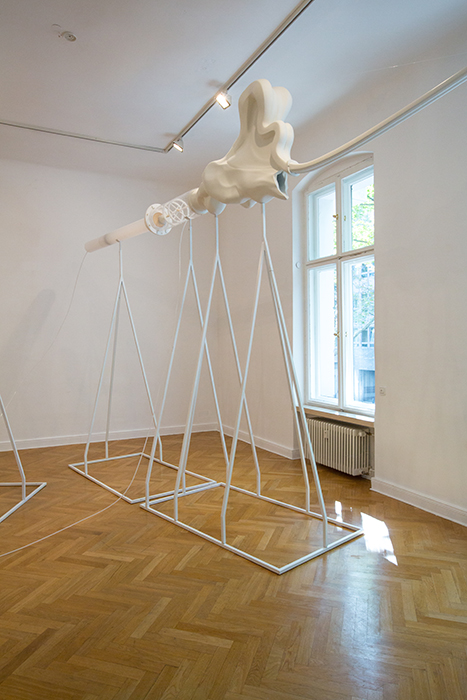 Elsewhere in the gallery, listen to the frequencies the Antarctic volcano organisms supposedly make to communicate with one another, recreated in ‘Angelic Organ,’ Humeau’s piece based on a banned 18th century instrument rumored to make its listeners and musician go nuts. Humeau is bringing the work on her Antarctic expedition, playing it on the boat in an attempt to get acquainted with the extremophiles. Whether or not the unlikely creatures respond to the project in action, check out Horizons in gallery form, on view through 11 October, to live out your own simulation of artful subterranean contact.