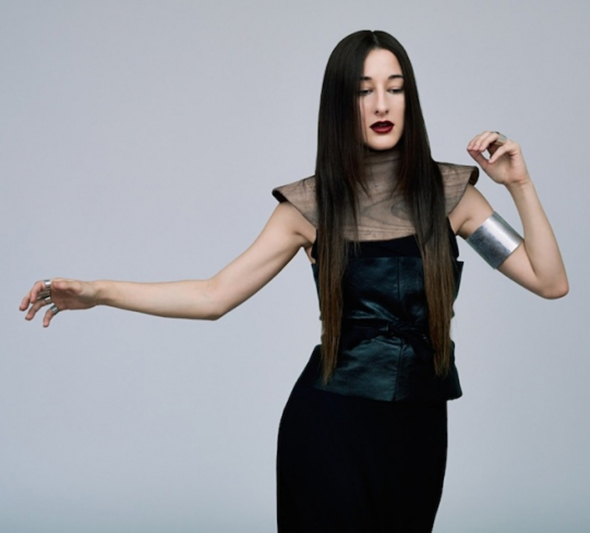 The career ambitions of Nika Rosa Danilova, otherwise known as the experimental goth pop project Zola Jesus, have taken their course in unrestrained, if not audacious territory throughout the 25-year-old’s young yet notable timeline of work. The Wisconsin-native has undoubtedly come a long way since her early post-industrial art pop beginnings, reaching her peak with last year’s orchestral-oriented Versions album, which was preceded by her acclaimed 2012 live collaboration with J.G. Thirlwell at New York’s Guggenheim Museum. As demonstrated on her latest release Taiga, she seem to be accepting her arrival into a more pop-minded outfit. On this record, the artist defrosts, ever so slightly, her signature frigid and melancholic soundscapes to warm up for catchier chorus lines and danceable drum and bass hooks- halting just before advancing into the radio-friendly sector of the pop spectrum.

Zola recently performed at the infamous Berlin nightclub Berghain, notorious for its impressive roster of techno artists and devoted clubbers who endure weekend-long stays of unrestricted hedonism. However, on this night, the venue presented itself in a different light, offering a vibe fit for an artist whose agenda is all about atmosphere and prose. But those expecting a performance of formal operatic vocals and Kate Bush-esque ethereality, in particular those who had never before experienced a Zola Jesus show, were in for quite a disclosure. Following a harrowing opening act of ear-splitting electronic noise, the singer gracefully walked on stage and started the night with the album’s opening track ‘Taiga’. The track is a build up of echoing background vocals and a melodic orchestra, led by Zola’s well-trained stoic verse, yet breaks midway to a drop of thumping bass lines and vigorous drumming. Accompanied was the revelation of an artist ready to shed her often-perceived highbrow composure, breaking out into a sporadic, violently liberating dance full of head banging, stomping, and convulsive movement. The night continued as such, offering equal parts witchy ether and spontaneous outbursts, to which the crowd’s reception was that of confusion, amazement, and overall satisfaction. Zola offered a certain kind of intimacy with the audience different from similar acts, a kind demonstrated both on and off stage – at one point even jumping off stage and mazing through the crowd during her penultimate piece.