“Track sleep. Track steps. Track habits.” – So begins the promotional video for this year’s transmediale, themed Capture All. Intimating an invasion, collection, and configuration of basic patterns and functions, the theme initially purports a fixation on human activity and an overabundance of whichever qualities it takes to be and predict what is human. However, when confronted with the assemblage of data taken from the range of daily movement, as can be seen in the festival’s main exhibition, what is striking is the disintegration of personhood in the anonymous accumulation of information.

From the slow recordings of the internet, as yet another black-boxed mechanism in Timo Arnall’s documentation ‘Internet Machine,’ to the consideration of second-self avatars in the ‘Mercenary Cubiclists’ and ‘Commons’ works by artists Tobias Revell and Laturbo Avedon, respectively – or the solidification of facial features in Zach Blas’ ‘Face Masks’ – a doubling or externalization of identity is produced, for better or worse. Expectedly, each work in the exhibition approaches the festival’s theme in its own manner, yet the overall impression forms a political question concerning the stance of the individual in relation to the larger state of recorded and catalogued existence.

In the video and research project ‘Invisible,’ wherein the artist has created a chemical product to remove and obfuscate remnants of DNA, Heather Dewey-Hagborg suggests that the state of invisibility can be attained through an erasure of (biological) traces. I hadn’t really thought about invisibility in this sense before. However, in contrast with Art is Open Source’s oracle machine ‘Stakhanov,’ for example, or Erica Scourti’s ‘Body Scan’ – where individualized forms of identity can be considered practically erased in the surplus of data and the means by which they have been categorically divided – it is curious which form of invisibility is more decisive.

The aforementioned ‘Stakhanov’ makes predictions on online users’ future actions based on its collection of users’ histories and interpolations of patterns from said histories. ‘Body Scan’ meanwhile demonstrates a rhythm of images based on recognition software that places a single snapshot – specifically, snapshots of areas on the human body – within a broader compound of visually similar images, therein labelling the original representation. In both the mounds of printed predictions ejected from Stakhanov, as well as in the repository of electronic pictures amongst which the body is distributed in Scourti’s work, the viewer can see themselves as a bit of information, or at best, a generality. This subsuming too is a form of disappearance.

Returning to the question of the political stance, it would perhaps do well to frame it in the two opposing points brought up in transmediale’s opening discussion. On the one hand, Peter Sunde, recently-jailed creator of the P2P platform Pirate Bay, proposed technological disengagement as a means of protest and reclaiming identity. Perhaps appropriately, Sunde does not have anything present at the festival. At the other end is Jennifer Lyn Morone, whose featured work ‘Jennifer Lyn MoroneTM, Inc.’ is the transformation of her identity into a corporate entity (intentionally recording and offering for sale all of the artist’s data and information). Morone suggests extreme capitalism as a form of resistance: taking hold of everything you would otherwise unintentionally disperse and claiming it as your own.

Physically, the main exhibition of the festival presents its objects in an interlocking of polygonal cages and semi-opaque walls, reminiscent of a mixture between a dystopian museum and an industrial hive. Conceptually, however, the works within, with their familiar yet distinctly distributed reflection of our electronically and technically mediated means of engagement, hang between the two poles of obsessive accumulation and a deliberate stepping away. 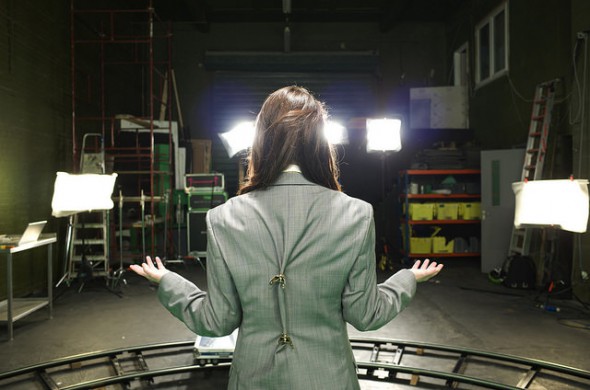 Natasha Klimenko is a Canadian writer and artist currently living and working in Berlin, where she is producing written, photographic, and cinematographic work.