For the month of June, Berlin Art Link is launching a series of feature articles, interviews, and studio visits on the theme of Art & Feminism. To kick off the series we offer this list, which begins as a dialogue with Elvia Wilk’s recent article ‘5 Berlin Artists Who Happen to Be Women’ in Sleek magazine.

In her salient look at some of Berlin’s most interesting contemporary artists, she observed that many women artists are forced to contextualize their work in relation to their gender: a qualification that is rarely asked of men, who are professionals primarily and then also “happen to be men”. While, certainly, not all women practicing art identify with feminism or explore gender politics in their work, we take a look at some of those women-identifying artists, working in Berlin, whose work takes on a political dimension as well. 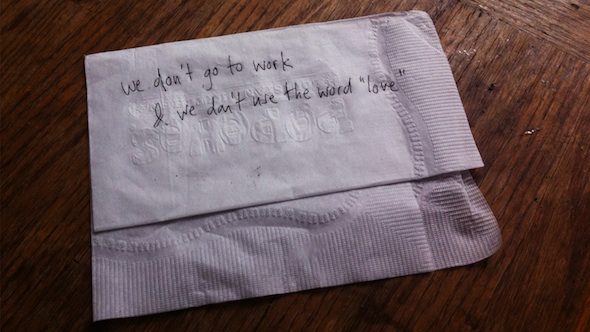 Hannah Black: We don’t go to work & we don’t use the word love // Courtesy of the artist

Feminism is an undoubtedly complex term, and is not easily amenable to one political stance. To claim that these artists “happen to be feminists” does not necessarily imply that their works always cover explicitly feminist themes, or that there is any one kind of feminism that they as a group embody. The approach is rather to showcase several artists who engage politically with the unequal status of women in all fields. From a recent exhibition exploring the socio-cultural dimensions of menstruation, curated by Kandis Williams, to the importance of ‘intersectional feminism’ as it relates to histories of the oppressed in Yishay Garbasz’s art practice, we present brief profiles of 5 artists in Berlin who happen to be feminists.

Hanne Lippard
Hanne Lippard’s primary performance medium is her voice. As a trained graphic designer, she began to visualise pure text in her work, in terms of what she calls “word decoration or rearrangement.” Her live readings are captivating, revealing a command of language both poetic and witty. In one of her earlier pieces, Beige, she reflects on the statistically most ubiquitous colour in the world. Her voice mirrors the monotony of the colour as she explores the signification and symbolization of beige in relation to its most usual wearer: the typically bourgeois middle-aged, Starbucks-drinking, professional woman. She reflects on the “becoming beige” of mainstream femininity, as a troubling rite-of-passage into adulthood and the corporatization of the self. “Beige is dull. Average. Beige is not yes or no, but maybe. Perhaps.” 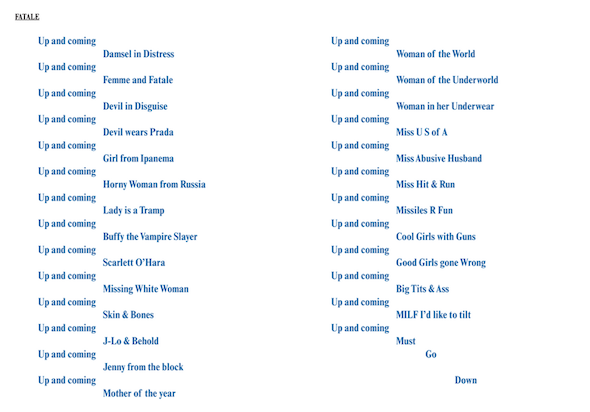 Lippard’s other texts, having a pleasingly onomatopeic quality, muse similarly on the making of female identity as a social product. Her poem Fatale reads like a list of probable pop-up adds, combining a host of popular descriptions of women in the media in a characteristic build-up, the impact of which is a titillating laugh at the absurdity of these portrayals. In addition to her written work, she is a regular contributor to Girls Like Us, a magazine focussing on feminist arts and writing, and fronts a band called Luci Lippard together with Lucinda Dayhew, which debuted at Girls Like Us Summer Salon last July.

Kandis Williams
Kandis Williams recently curated an exhibition about menstruation called Stains in the Cowshed. The very visceral display was inspired by an Instagram scandal, wherein poet RupiKaur posted a series of photos of herself in period-stained clothing. The photos were removed as ‘inappropriate’ and a discussion about the shame and fear surrounding menstruation ensued. The exhibition curated by Williams displayed a complex look at the rituals, taboos, and alternatives surrounding periods, through a selection of fascinating audio-visual pieces and workshops. 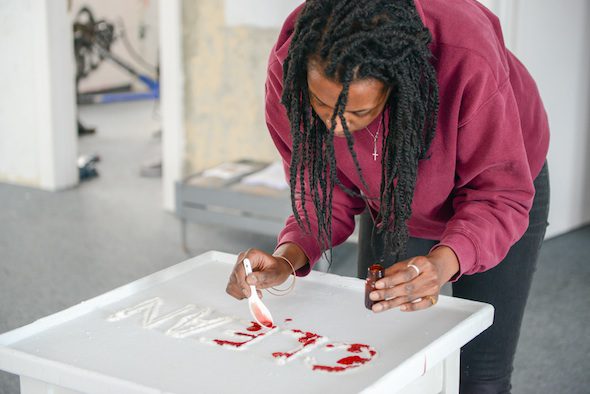 In her own art practice, Williams produces large-scale black and white collages that “track a deeply personal on-going exploration of racial-nationalism, authority, eroticism, magic and violence.” These rich works on paper are repetitive and geometrically complex, and Williams builds almost architectural scenes out of found images. The collages feature references to African-American cultural heritage, as she engages in a critical way with the anthropological study of black identity. Her emphasis on the physical body is a powerful and recurring theme in her work, whether in textile, photography, drawing, or collage. 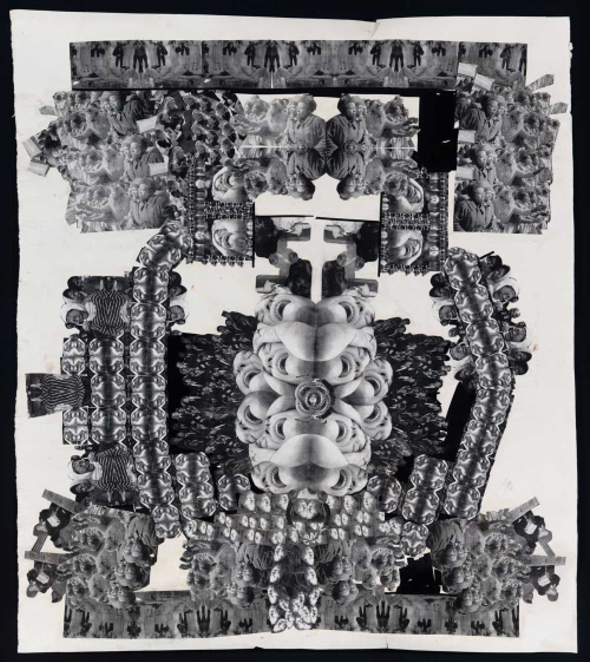 Yishay Garbasz
British-Israeli artist Yishay Garbasz deals with trauma as it appears in various heated conflict zones worldwide. Her ongoing exhibition Severed Connection: Do what I say or they will kill you at Ronald Feldman Gallery in New York, presents photographs and installations reflecting on her travels in Korea, the West Bank, and Belfast in particular. The fence, the wall, and the coiled razor wire are powerful motifs in this exhibition, as she looks at the way governments create cultures of fear to sever connections between people. 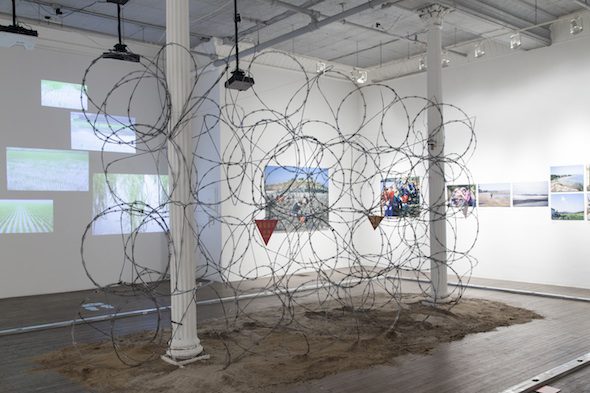 Though being a trans lesbian does not define the works in her current exhibition, Garbasz has also chronicled her physical transition in Becoming (2010), a flipbook featuring 28 images of her nude body taken over 28 weeks, displayed using the second largest zoetrope in the world. Garsbasz’s emphasizes the complicated relationship she has had with certain feminisms – specifically those with transphobic tendencies – and instead makes clear that her feminist perspective is decidedly intersectional: the struggle that her work embodies goes beyond the one-sided concern with womens’ rights towards a more holistic understanding of feminism as it intersects with issues of race, sexual orientation, class, and ability.

Hannah Black
Hannah Black is a writer and an artist, whose work draws on critical theories of race, gender and capital. Her writing for the New Inquiry has gained a cult following, as her command of language both literary and theoretical is a rare pleasure to read. 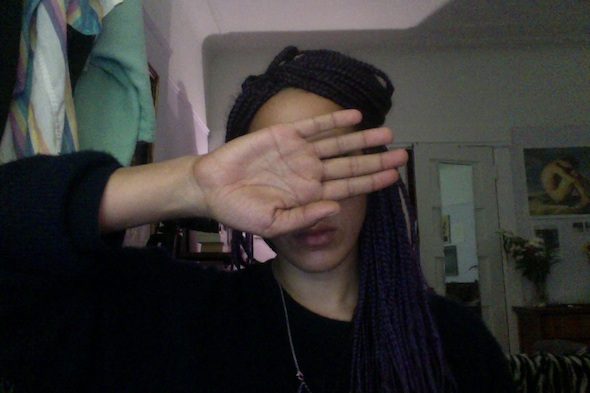 Black’s visual works are often built around text, her most lauded medium. Her fluidity between media makes her oeuvre all-encompassing, with themes of class, race, and sexuality intersecting throughout. In one video work, My Bodies, she presents a hilarious mash up of pop songs and corporate culture, as stuffy white men appear against the audio backdrop of R&B songs with the lyric ‘my body.’ Through this piece, she looks at the body as a “vector of domination” and questions the ways in which certain bodies – particularly those of white heterosexual males – have come to be privileged over others.

Hannah Black: My Bodies // Courtesy of the artist

Hito Steyerl
Established and prolific artist and filmmaker Hito Steyerl has been teaching at the UdK for many years, and her research interests cover cultural globalisation, feminism, migration and racism. Alongside her video work In Free Fall (2015), at a group exhibition on Accelerationism at Kraupa-Tuskany Zeidler in 2013, Steyerl left a small yet powerful intervention in the description of her piece: “The author wishes to personally insult anyone attracted by accelerationism by calling it a bout of dead white Ferrari envy, dripping from head to toe with stale testosterone.” This kind of biting and astute commentary is typical of Steyerl’s work, as she’s become famous for theoretical and critical narration of her at the same time aesthetically brilliant films.

Hito Steyerl: Factory Of The Sun, 2015, film still // Copyright of the artist

Steyerl is currently part of the German Pavilion at the Venice Biennale, where her film The Factory of the Sun has gained considerable critical acclaim. The film is a collage of the digital information age presented with dry wit, as she pastes together everything from mock commercials to Deutsche Bank drones, using motion capture technologies to mediate the interaction between the human body and the virtual.

Alison Hugill has a Master’s in Art Theory from Goldsmiths College, University of London (2011). Her research focuses on marxist-feminist politics and aesthetic theories of community, communication and communism. Alison is an editor, writer and curator based in Berlin. alisonhugill.com>