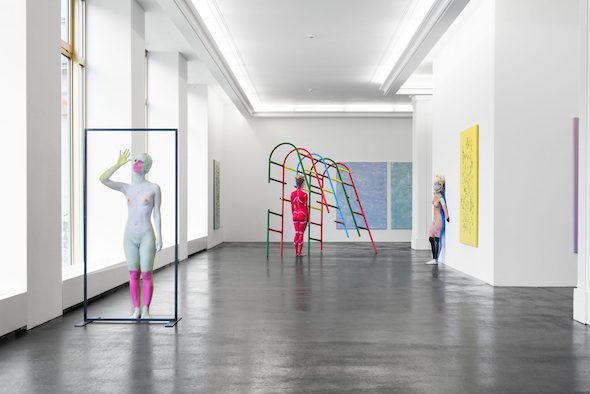 Peres Projects is showing new works by Polish-Canadian artist Przemek Pyszczek and Bolivian-American artist Donna Huanca in their current exhibition Muscle Memory. Separate sculptures, paintings and performances stand together as one colourful and collaborative installation. As first generation North Americans, Huanca and Pyszczek draw from their individual experiences of social and cultural displacement. The works are centred around the body: the extent of control we have over our bodies in society and the memory stored within. Muscle Memory is surrounded by paradigms of confusion, revolution, solutions and illusions.

Sculptures by Przemek Pyszczek – fragments of sickly sweet coloured metal climbing frames – greet the audience at Peres Projects through the windows facing onto Karl-Marx-Allee. Upon entering the gallery, the visitor is confronted with childhood nostalgia, leaving a sense of pain and a displacement of the senses, as well as the materials. Cosmetics, metal, paint, clothing (and the lack thereof on the female body) are combined. Lacquered steel ladders leading to nowhere are juxtaposed in curious positions, and form geometric patterns as they lay scattered across the gallery floor and walls. 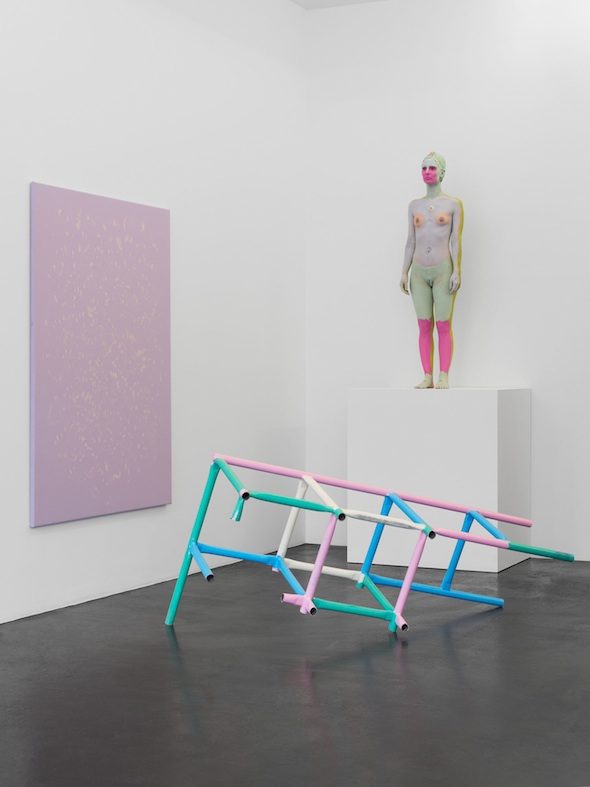 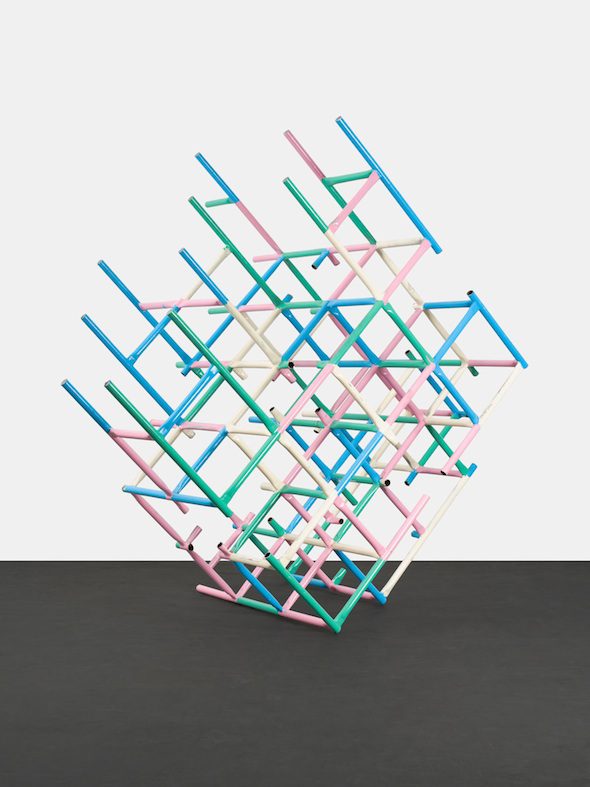 During the opening the sculptures were intertwined with the brightly-coloured slowly-moving naked limbs of women performers reminiscent of Alejandro Jodorowsky’s art factory in Holy Mountain and the performances of Marina Abramovic. Pyszczek’s Playground Structure series are inspired by the architecture of Eastern Europe, which, ‘during the post-war period not only functioned as a means to house as many people as possible after the destruction of WWII,’ but also as a means ‘to embody the aspirations of communism which, in its ideal state, reduced the complexity of life into human scale units of shared wealth and community.’ In the centre of these typical large-scale housing blocks, built by post WWII communists, were these ‘brightly coloured and elaborately shaped metal jungle gym equipment’, which Pyszczek recalls from his childhood.

Visible around and through the empty spaces of the sculptures are a series of rectangular paintings, as well as two pieces painted directly onto the white walls during the performance. The paintings by Huanca contain the bold, pretty colours of high end cosmetics and luxury fashion fabrics: the perfect shimmering eyeshadow shade of sea blue-green or iridescent purple, such as in the plaster paintings ‘Baja Blast’ and ‘Pieces are so sensitive.’ In the latter, the movement of the marks, colour and light bring fantasies of swirling tropical waters to mind. Yet this water is not crystal clear but perhaps polluted as if from an oil spill, and the plaster is cracked like a barren sun-scorched earth or the laugh lines and creases in the thick makeup of a drag queen. 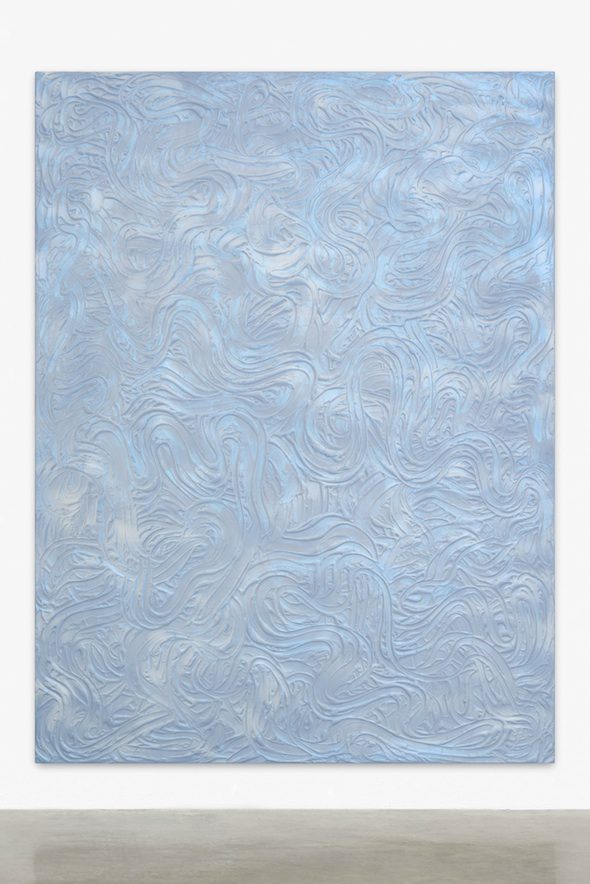 Huanca’s performance has a meditative spiritual or ritualistic quality, exploring self-love and sacrifice. It also mirrors the everyday narcissism of contemporary internet culture and the feminine routine of applying makeup and dressing for success in the workplace. The works speak of 1980s power dressing, emphasising brand-name cosmetics and fashion: ‘On the one hand, these outward facing garments and war paint empower; on the other hand they represent a male ideal of the female form.’

In Muscle Memory, Pyszczek and Huanca explore how feminism and communism are both often treated and applied in equally misunderstood, mystified and skewed ways by society. These primary interests are largely masked, painted over with something unnatural, however aesthetically pleasing, like Dorian Gray and his portrait. Feminism and communism are both based upon the common interests of human beings, to be treated in accordance with fundamental human rights: to be free, not fettered to the power of rich capitalists, or a predominantly patriarchal media, or a doomed government but to nurture, evolve and create in ways that are natural to us and set apart from materialism and oppressive religion. In 2015, as a whole we are far away from this ideal. Huanca and Pyszczek show how set gender roles, femininity, feminism, as well as the communities we live in need to be constantly questioned with a childlike curiosity as the world changes, or refuses to. 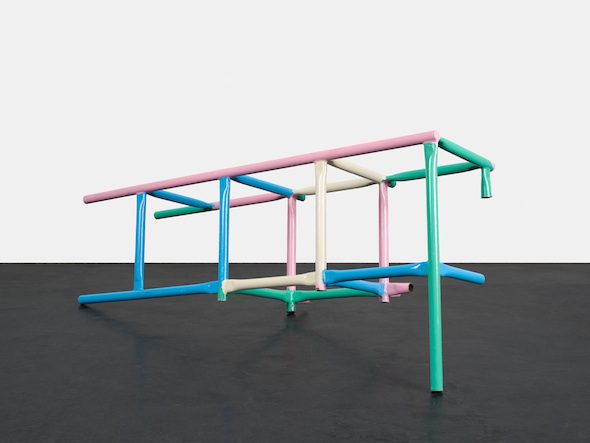