The following series of interviews look at the curatorial work within three pavilions at the 56th Venice Biennale. Though in different ways, the exhibition spaces in these pavilions are not understood as a mere container or receptacle of artistic pieces. They are designed to create a context, inducing meaning in the work or even co-formulating its reading. The usual exhibition space as a temporary platform that displays a certain content is being annulled here, while it instead becomes a sort of agent of the work. In an almost uncanny way – which duplication or mimesis usually causes – space is delegated to materialize a discourse, situating the works in a particular tradition and instantly immersing the viewer in it. In the following conversations with the curators of these pavilions, we will not explore so much the artworks as their thoughts behind these contexts that the architectural spaces bring forth. 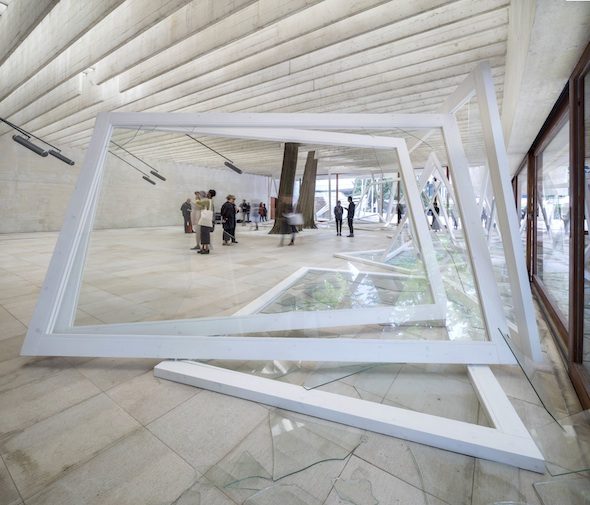 At the Nordic Pavilion – which, for the first time, is represented only by Norway – Katya García-Antón curated the work of Camille Norment, in collaboration with Antonio Cataldo. Relating to the concept of dissonance, which according to the exhibition’s press release inspired the work in ‘a sonic, cultural and individual way’, the pavilion is not merely conceived as a container space for sensorial experiences. Rather, it recalls postmodern architectural deconstructivism, with a duplication of the glass window wall system and its formal breaking into pieces, while practically annulling the exhibition space as a space for display.

Marta Jecu: how did you work with the concept of dissonance from a spatial point of view? Was dissonance a means to deconstruct the formal unity of the exhibition space and what is the ultimate goal of this procedure?

Katya Garcia-Anton: I did not set out to do a project on dissonance, I set out to find an artist who I thought would respond to the pavilion. From an architectural point of view, most people consider the Nordic pavilion to be one of the most beautiful ones in the Giardini. But is also a complicated pavilion to work with, because it is not a white cube. Its various elements that make it unique, are also not easy: the glass walls are like a membrane, which makes it difficult to work with video, for example. The pavilion also has trees in the middle of the space, so the roof is not completely isolated. Birds enter in the pavilion and when it rains in Venice, water drops inside.

When the architect Sverre Fehn was commissioned in 1958 to build a Nordic pavilion (which was actually finished in 1962), he was obviously thinking what it means to be ‘nordic’. All Nordic countries have a very strong relationship with landscape and including the trees in the pavilion was a response to that. The glass walls were also seen as a way to express a democratic position, a political transparency. But all of these layers of thinking create a very difficult situation to work with, which became my starting point. For me the first question was: which kind of artist would bring out the best of the pavilion and vice versa? Previous curators had tried to ignore the particularities of this space, others tried to cover up the walls, others tried to work with it. The second point for me was the situation of the biennial, a cacophony of voices, which makes it very difficult to have a group exhibition. Personally I felt that it was much better to work with one artist in order to maintain a level of density, which would allow her to deepen and give a greater focus to the work.

Another aspect that was also very important to me was the long history that Norway has with experimental music – going back to jazz, and then into noise in the ’80s and ’90s – and the fact that this community of musicians collaborated a lot with the community of artists. This created a cross-disciplinary situation from the ’50s on, which continues to be very strong now. 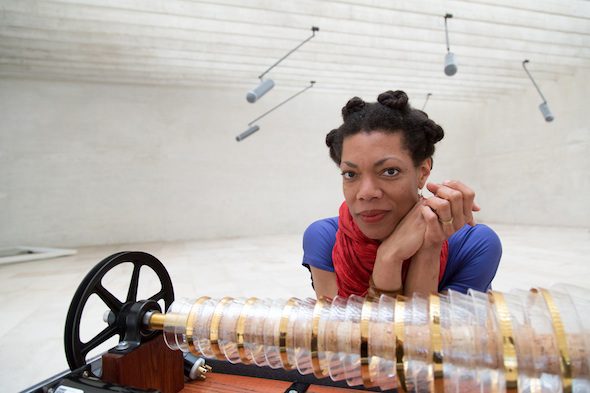 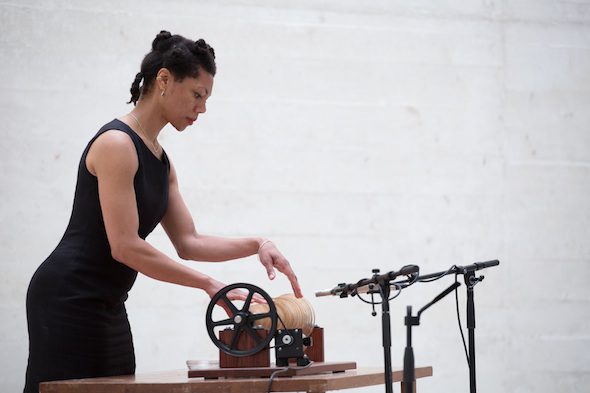 I had intensive discussions with Camille Norment: she is analyzing the relationship between sound and the body and had studied the history of how sound has affected the body from the Enlightenment to the present. It is also a question of how our culture has used sound as a form of thinking about the body. For example the glass harmonica with which Camille Norment works was an instrument invented in the 18th century by Benjamin Franklin and was used to cure and tame women in a state of hysteria. The instrument was banned for 200 years and came back in the 1980. The power of sound over the body can also be seen nowadays, for example in relation to the electric guitar that generated an almost orgasmic behaviour. Camille Norment asks: what can sound tell us about the way we think about ourselves and our bodies?

MJ: You transposed these insights on the architecture of the pavilion itself. Did you intend to also work with the exhibition space as an institutional space – in the sense of creating a deviant formula that is working against or along with the clear, unambiguous institutional space, which is deconstructed?

KGA: It could be seen this way, since the work is intervening so much on this heavily charged platform which is a national pavilion. But what was more important for Camille Norment and I was the accent on individual bodies, rather than big institutional frameworks. The Giardini is visited by so many people that it is difficult to create a situation there, so we have tried to impact those bodies in a physical way that then becomes mental. The physical shaking of the pavilion with the windows unfolding, the physical impact on the body which you feel with the voices and tones has an immediacy, but also a long term after-effect. The amplifiers that diffuse the music have a vague military aesthetic. Sound has been used and is being used more and more by the military not just to control but also to destroy and to marginalize. Sound oscillates between being destructive, aggressive, and a form of affirmation, of building. 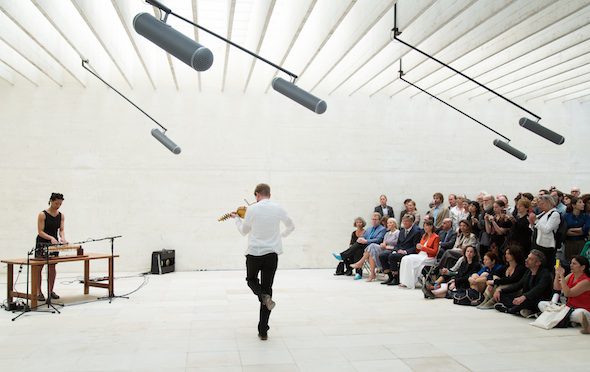