An exhibition at Berlin’s Embassy of Finland is where art currently meets fashion, and the intersection is more political than aesthetically-driven. Boutique is a touring exhibition originally shown in the Amos Anderson Art Museum in Helsinki, arriving here right on time for Berlin Fashion Week. The exhibition brings together visual artists and fashion designers, pairing them up to create works that explore the increasingly intertwining worlds of art and fashion. While wearable arts and fashion photography jump to mind when imagining how these worlds might meet in an exhibition space, most of the Boutique artists took a less literal approach, using this platform as an opportunity to make critical statements about the fashion and beauty industry. 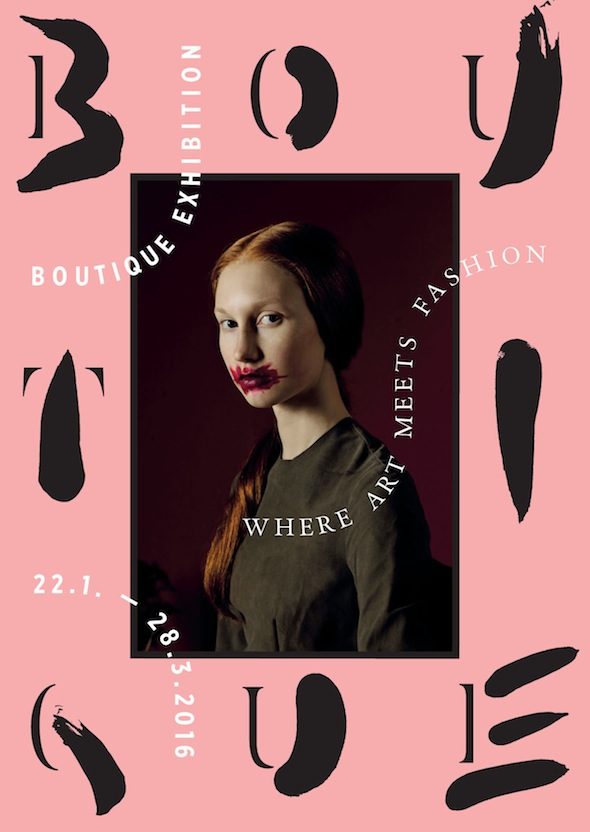 All of the artists and designers seem to share a concern for the wastefulness of consumer culture, a current that was particularly strong in the performance installation by artist Salla Salin and designer Timo Rissanen. In its original format in Helsinki the installation featured a woman sewing white cotton t-shirts from start to finish live in the gallery space for the duration of the exhibition. The installation was complete with the packaged product for sale in the gallery shop (naturally, the proceeds went to charity). The title of the work, ‘15%’, comes from the average amount of waste fabric created and thrown away in the mass production of clothing. The extra 15% of fabric off-cuts are given to the buyer with their white tee, shifting the responsibility and ethical dilemma of disposing of it to the consumer. The work directly confronts issues of waste and consumption while the garment choice of the ubiquitous white t-shirt works as a symbol for the almost disposable nature of cheap mass-produced clothing. For this show, the work is presented as a video. While its message remains loud and clear, I imagine as a live performance the issues of sweatshop labour and of gendered labour would have been more arresting.

Two of the artist-designer pairs focused on body image and beauty ideals. ‘Hate Couture’ by Tärähtäneet ämmät and art duo Nutty Tarts is a collection of nude coloured garments featuring the undesirable bodily features kept so well hidden in fashion and beauty advertising. The clothing sported hair, bulging flesh, drooping breasts, and cellulite, in a playful and to-the-point critique of the pressures of fashion industry body image ideals. For their work ‘Body Beautiful (Remix)’, Tero Puha and Teemu Muurimäki developed an entire advertising concept for a high-end fragrance and cosmetics line, where the “fragrance-free” product is essentially natural beauty itself. A video commercial plays among giant poster stands featuring a man and a woman photoshopped with various body types, all in the familiar seductive soft-focus of advertising imagery. The video features tired tropes of beauty advertising such as near naked bodies lolling around on the seashore. Like ‘Hate Couture’, ‘Body Beautiful (Remix)’ puts the unrealistic beauty ideals of the fashion industry under fire, also highlighting the false promises of advertising.

Other works avoided the negative aspects of the industry and took an approach that harnessed the storytelling potential of both art and fashion. While somewhat successful, their more whimsical nature felt slight when compared with the socially-engaged viewpoint that the rest of the exhibition offered. Unfortunately for some works, there was something lost in the translation from the exhibition’s original location. The installation by artist Jani Leinonen and footwear designer Minna Parikka was designed to overwhelm the viewer inside an immersive booth, decorated heavily with iconic characters from television and consumer products, raising issues of originality, authenticity, and plagiarism. At the embassy exhibition space, however, Parikka’s shoes, made with the same busy composition of cartoon characters, were displayed on a hot pink wall, looking all too realistically like an actual shoe shop window. Likewise with the cartoon-like mannequins by Katja Tukiainen wearing the designs of Samu-Jussi Koski, of which only three from the original installation of ten figures were brought to Berlin. The three mannequins were placed as though at random around the room, losing the original installation’s effect of an army of absurdly-proportioned, pink-haired girls. 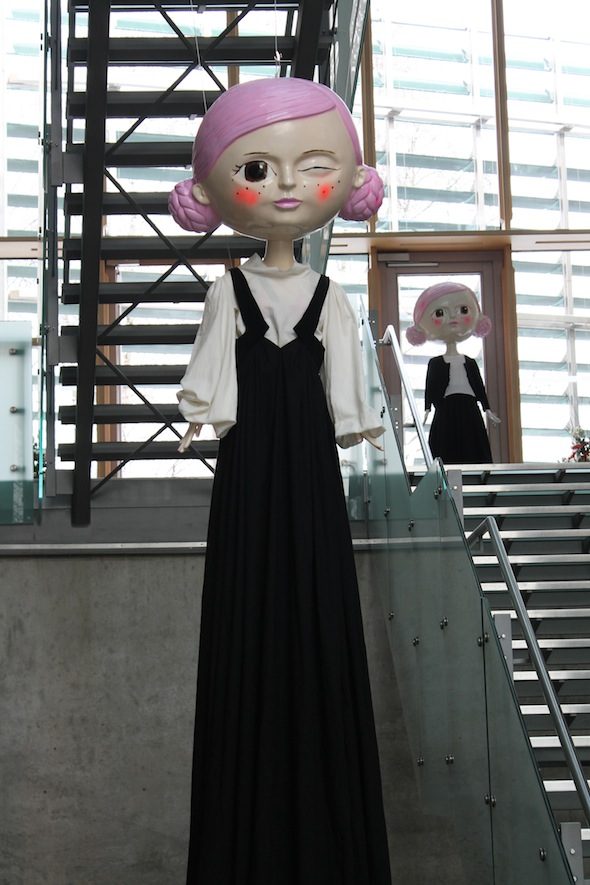 Boutique – Where Art Meets Fashion runs until March 28th. While the reduced selection of works and rearranging of the original exhibition format may leave something to be desired, the exhibition works as a socio-political exploration of the fashion industry through the filter of art. Art that critiques consumer culture is nothing new, but the exhibition is certainly topical during Berlin Fashion Week and at a time when fast fashion isn’t slowing down any time soon.