Masha Qrella’s sound has always been ahead of its time. The release of her new album KEYS–reminiscent of David Bowie, Metronomy and Saint Etienne–is an excellent occasion to look at the influential Berlin-based artist as a complete work of art.

Gudrun Gut recognised Qrella’s talent early on and released her first solo album LUCK, an exploration of the tension between orchestral notes and fragility that contrasted sobriety and emotion with fractures and unexpected twists. Her second album UNSOLVED REMAINED (Morr Music, 2005) was electronic, sophisticated and with a sound years ahead of its time. Her songs ‘Everything Shows’ and ‘Guided by the Stripes’ seem to be anchored in the Zeitgeist of today. They are more than ever an expression of the loneliness one can find in Berlin. A city whose cobbled open spaces and transformation into a city of the hip needs the rationale these songs provide. They are not carpets of sound, but rather a collection of breaks and breathing spaces that can penetrate and infiltrate the city. Over the course of one song, Berlin recaptures its vertical space and claws its identity back. 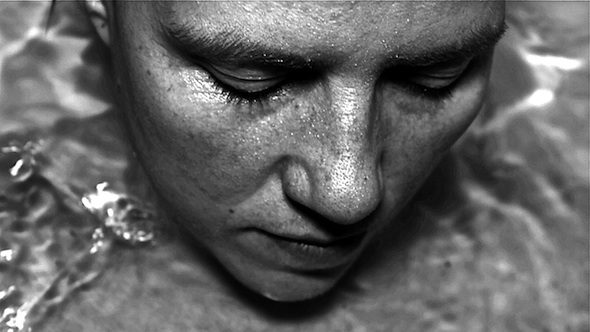 In the same way Qrella set a poem by Heiner-Müller to music in an extraordinary onstage musical performance at the Heiner-Müller festival in Berlin’s HAU theatre in March. Until then, no one had had a clear idea of the association between a GDR intellectual and a western musician: Heiner-Müller transcribed David Bowie’s song ‘All the Madmen’ in 1977. Qrella made this link between Müller and Bowie pretty clear. In doing so, she brought Müller’s poetry and the Berlin sounds of Bowie together, in a way that indistinguishably melded the two.

Very much like Bowie did with THE MAN WHO SOLD THE WORLD, Qrella produced KEYS by herself. It is not only a musical and philosophical task with which Qrella is busy on KEYS, but also mainly a window into the artistic queer. This is something that was also triggered by Qrella’s collaboration with the Anglo-German performance group Gob Squad, who are intrinsically Qrella-like: demonstrating respect for the audience, self-irony, openly displayed fragility and the artistic process on-stage.

This album release also sees Qrella working together with filmmaker Diana Näcke: the video for her first radio release DJ pays homage to the British filmmaker Ken Loach (Kes) with a touch of Anton Corbijn. As a result, the video was discovered and invited to be screened at the New York City Independent Film Festival and the Hong Kong Arthouse Film Festival.

Time and again, Qrella’s music relates to Berlin and artists who have influenced her on levels beyond the musical. Qrella’s move from Berlin Prenzlauer Berg to the admittedly much harder and grimier neighbourhood of Berlin Wedding was one in search of anonymity, inspiration and a different environment. This makes itself very much present in her song ‘Keys’, and more specifically in the video which features Qrella as a giant rat on the underground U8 line, using a simple mask to shroud her identity. The still and contemplative rat brings forth some resonance of Wim Wender’s Wings of Desire, where all that is left to focus on is the voices of the lonely.

In her newest video for ‘Ticket to my Heart’, she collaborates once again with Gob Squad, referencing a play by Rainer Werner Fassbinder (Water Drops on Burning Rocks) and its adaptation by French filmmaker Francois Ozon.

In this sense KEYS is a sparkling pop fountain you will not only listen to over and over again, but in which you will also discover a spiderweb full of interwoven linkages of art. Morr Music will release KEYS on the 15th of April.