Gallery Weekend is one of the most important dates in any art-loving Berliner’s calendar. For three glorious culture-filled days, some of Berlin’s most exciting and dynamic galleries throw their doors wide and invite the masses to hit the streets in search of cultural treasures. I began my Gallery Weekend amongst the contemporary art galleries of the Schöneberg district on a temperamental Spring day, filled with anticipation and excitement for my journey into the unknown.

I became quite literally immersed in artwork from the moment I stepped inside Isabella Bortolozzi Galerie on Schöneberger Ufer. What ensued was an unexpectedly physical adventure in, around and through a series of installation pieces by Columbian artist Oscar Murillo. The entrance to the gallery was filled with metal frames akin to stretchers or stacked bunk beds, with sections of the space veiled from immediate view by heavy black machine-sewn curtains made from scraps of canvas. Piles of exquisitely mouldy, fossilised rocks in bright orange and black tones adorned the high alcoves to provide subtle pops of colour in the otherwise monochrome space. Instantly I felt as though I had been transported into a landscape far different from the white cube gallery space that I had been expecting and, perhaps, grown accustomed to seeing. 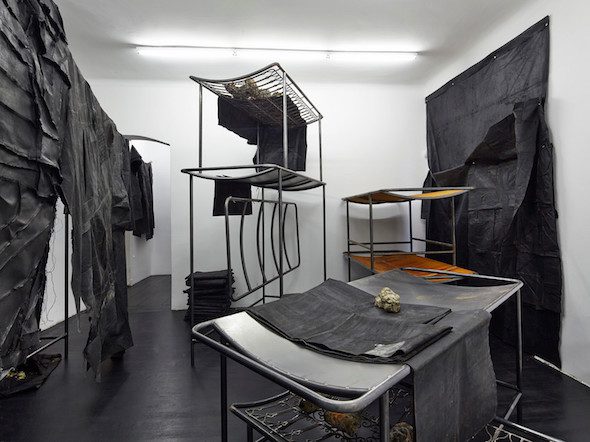 Turning to move into the next space, I discovered that a suspended sculpture of heavy draped cloth blocked my path. Hesitantly (and ready to be scolded by gallery staff for my transgression), I pushed past the sculpture onto my next challenge. But this was obviously what the artist had intended and welcomed. As I drifted through the space, I was greeted several times by an obstacle course of metal structures and suspended drapes of heavy cloth that I had to dodge and weave through in order to continue further into the landscape. Growing more confident, I began to thoroughly enjoy the physicality and interactivity of the installations, which required me to bend low, step high and twist my body in order to experience them. The playful and physical quality of the installations made the space feel as though it was a Gothic industrial playground or an adventurous quest through the gallery’s landscape. Leaving the gallery, I had the distinct impression that my time in the space was a performance in itself. The works had forced me to change my usual approach to viewing artworks and, in many ways, had encouraged me to break the unspoken ‘rules’ of visitor etiquette.

After a short hop, skip and jump down the street, I found myself at renowned contemporary art gallery Barbara Wien, where Iraqi-American artist Michael Rakowitz was putting the final touches on his latest solo exhibition The Invisible Enemy Should Not Exist. The exhibition addresses the appalling instance of looting at the National Museum of Iraq during the 2003 invasion of Baghdad. During this period, some 15,000 objects of national and international cultural significance were stolen or damaged, although many items have since been recovered. To bring attention to this act of cultural and historical genocide, Rakowitz has crafted true-to-scale papier maché reproductions of objects whose whereabouts are still unknown. Set up like a museum display, each object in the space has been faithfully rendered in colourful strips of Middle Eastern newspapers and food packaging. As I read the accompanying information cards that divulge the particulars of each object, I felt profound sadness that these reproductions may be all that is left of some of Iraq’s most significant cultural treasures. It seemed particularly significant that disposable items of everyday culture in Iraq – newspapers and packaging – had been transformed and recast as precious objects of high culture by this process. After beginning my tour with such a lighthearted spirit, this exhibition brought my thoughts back to the cultural significance of objects and their role in strengthening national identity. 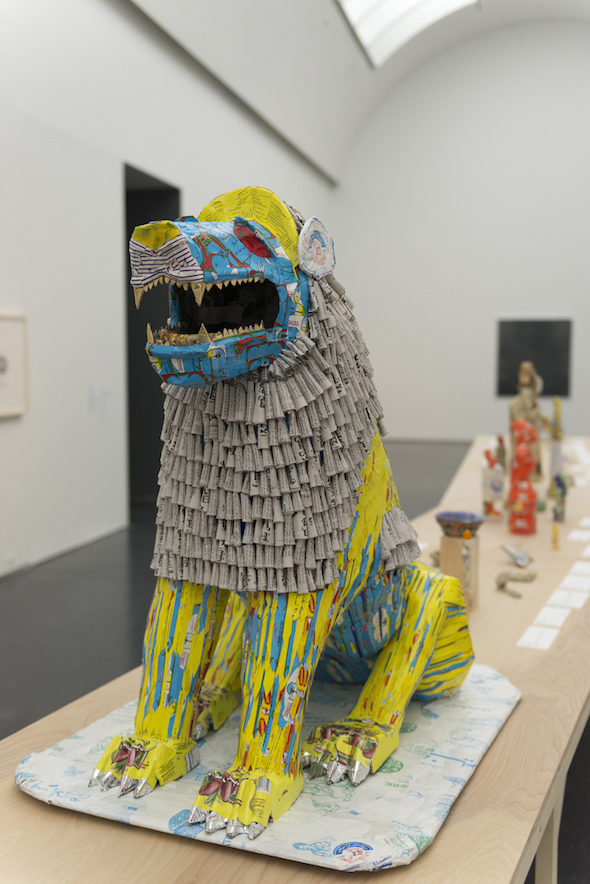 Still pondering what I had just viewed, I made my way to Potsdamer Straßer to visit Blain|Southern’s latest exhibition of works by British artist and writer Harland Miller. The exhibition featured a series of large canvas works painted to look like the slightly battered front covers of Penguin classic novels, although one cannot help but wonder about the character (and perhaps the mental health) of the library’s owner. The titles of the books are wrought with wit and bear black humour-tinged one liners such as ‘Overcoming Optimism’, ‘Back on the Worry Beads’, ‘Hell…It’s Just Forever’ and ‘I Need a Hole Not a Donut’. As I walked around the bright and airy space barely suppressing a giggle at Miller’s cleverly written titles, I realised that others around me were doing the same. While it is important to view ‘serious’ and confronting art, it is also pleasant to see people experience the lighthearted side of artistic expression and for the respectful silence of gallery spaces to be punctuated with an appreciative giggle every now and then. 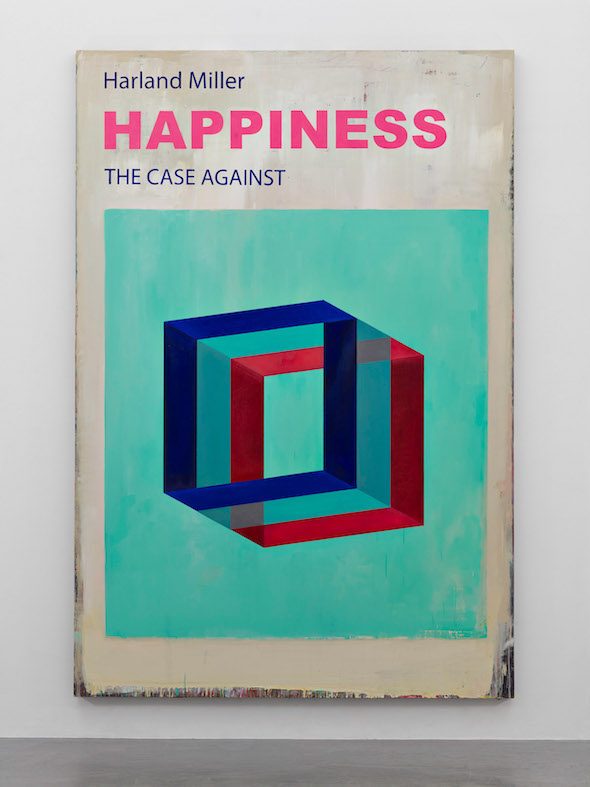 Located in a sunny courtyard at the back of an apartment block, Arratia Beer featured a solo mixed media exhibition by British artist Ed Fornieles entitled Die Geist – Flesh Feast. The exhibition’s concept was based around Western society’s culture of self-management and the way in which the body and mind are leveraged and controlled. Entering the gallery, I was immediately assaulted by large charts sporting motivational slogans such as “the first and best victory is to conquer self”, “what you think creates your future” and, most poignantly, “get your shit together”. A makeshift theatre in the adjoining room featured bright orange reclining deck chairs placed in front of a large film screen. After laying back in my chair, I became a willing hostage to a bizarrely black-humoured motivational self-help video concerned with self-management and dieting. The narrators maintained an eerie monotone voice throughout the film that I associate with the brainwashing tactics of fanatic cults. This observation, however, only seemed to highlight the oddly cult-like following that Western society’s obsession with self-improvement, control and restriction has given rise to. While I did not accept the offer of a starter diet pack that was mentioned in the exhibition’s floor sheet, I continue be intrigued about the diet plan that generated this intensely strange yet fascinating exhibition.