Realness of place—locatable in the details—is recontextualized within the expansive realm of the imaginary in a six-panel composite print, which comprises Julie Mehretu’s collaboration with Niels Borch Jensen Gallery & Editions. ‘Epigraph, Damascus’ is a large-scale work that interweaves varied processes of mark-making: a layering of surface that delves multi-perspectival imprints of the city’s distinctive forms.

Tactility and motion embedded in the image’s construction, spreading across its surface, engage in a process of writing—a history, personal narrative, or travel account. The loose, broad strokes pressing up close to the outer surface resemble those made on the exterior of city buildings, as graffitied tagging: ubiquitous and indecipherable yet identifying a personal presence. In roaming through, or inhabiting a place, impressions are collected, continuously restructured, and cultivated. The city becomes an assemblage built by familiar terrains and singular impressions. Though a flat rendering, Mehretu’s work evokes this experience, opening up the surface as a space, which can itself be traversed. 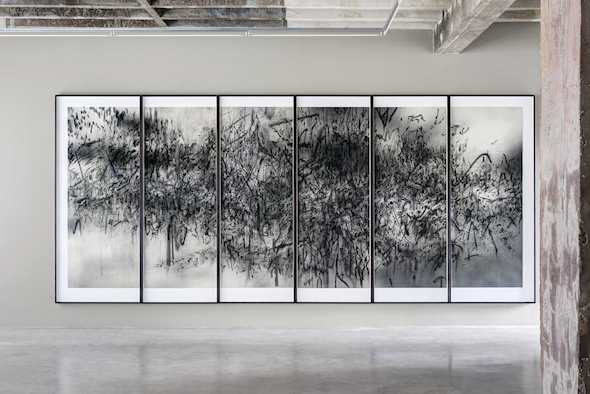 At the basis of the work—as its foundational element—are precise though minimal architectural drawings, executed in multiple directions, from conflicting perspectives. They indicate the structural details of buildings in Syria’s capital city, Damascus. Recognizable columns and archways float among the seriality of untethered, undistinguished windows. The delicateness of the lines produces varying levels of visibility, as they vanish behind darkened clouds and unwieldy forms and reemerge in open, sparse patches only to break off or fade into emptiness. As though an unfinished sentence, lines leave a thought open-ended, facilitating the visualization of a change of direction or form. The architecture’s lines are engrained—impressed from the gravure plate they were etched into—but the breakage of their systematic forms, the incongruity of their patterns, physicalize their instability and impermanence. Absent of an underlying logic, it permits simultaneity in the process of reconstruction. The image that materializes is an unfixed one that evades its own completion and singular expression, instead maintaining flexibility, seemingly undergoing a process of editing—through erasures, directional changes, and cross-outs.

Overlaying the geometric uncertainty of the cityscape, gestural strokes in black range from long continuous lines to smatterings of brief, choppy segments. The effect is that of a storm obscuring the landscape, infusing chaos and turbulence in the otherwise quiet sparsity of a scene devoid of signs of life. Framings of interlocking, though disjointed, architectural forms are masked by varying gradations of darkness that smudge, splatter and drip down, as a view from a rain covered window to the outside. The transparency of this screen is perceptible, as it bridges the distance to the buildings beyond, moving in closer to the viewer’s space—or enabling the viewer to enter into the space of the image—while maintaining the threshold of its placelessness.

Applied directly to the copper plate during the printing process, translucent marks seep in through fluid shading and graphic splotches, manufacturing changing atmospheric conditions that are highly concentrated in the center panels—which are darker and denser—dispersing and opening up in the two outermost panels to make entry accessible.

The image’s fluid, interconnecting systems are disrupted by the frames of the six panels, but its unity is retained. The frame itself is an architectural element that structures the work, but which is not impermeable and does not fully contain, instead permitting continuity across its borders. The process of printing—as one that facilitates reproduction and dissemination—as a medium of communication that is also physical, becomes spatialized as well, even as it compresses the space of the city’s intercommunicative networks. The depths of its flatness can be roved according to innumerable alternative paths, whose spontaneous lines and loose markings elude exact replication.

The historical, social and political associations cannot be detached from their representational manifestations, but referential possibilities remain unfixed: they are plural, malleable, transmutable. Their physical presence is not reproduced as a monolith. The overall expression is that of an image building itself—interlacing systems of unanchored lines and shifting gradations in process. Or perhaps that of an image—a place—unraveling. The translucence of its many layers produces an effect of reflections, as though generated in the windowed surfaces of adjacent buildings: boundless re-materializations that make unclear where image ends and actual structure begins.