Approaching Tempelhof Museum, the faded ornament of a late 19th century villa reveals a time when the village of Alt Mariendorf, a former mansion colony, stood apart from the patchwork that is now greater Berlin. The neighbouring Heimatsmuseum (museum of local history) is held in a former school, with all the quirks and eccentricities of such a building. It is a true cabinet of curiosities; stuffed birds have found their home with early computers, chocolate moulds from the local Sarotti factory, oddments of tableware and furniture. On first look the mixture seems incomprehensible, but when given time and attention opens up a myriad of local lives and stories. 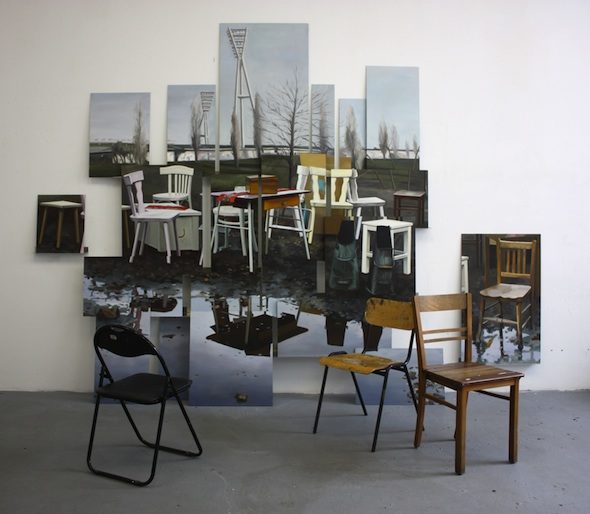 The ground floor of the gallery hosts an exhibition space, the largest of the old school rooms with tall windows looking out onto the street and what would normally be an aged red vinyl flooring. Now, however, it has become the studio of Maria and Natalia Petschatnikov, twin artists originally from Russia, whose exhibition ‘Collecting the City’ was curated by the Frauenmuseum Berlin and opened on May 19th. At the entrance, the white paint marks on the installed grey floor and the washed out markings on the walls are puzzling. Realist paintings on various sized panels lean and overlap, some on ledges at different heights and spatial relations, some on the floor against the wall, as if in the studio. There are objects in the room that mirror the paintings; a pair of shoes, a collection of chairs. A number of panels depict the back of paintings sat as if turned to the wall, or works wrapped as if ready to leave. There is a feeling of transit and of provocation. The staged studio is a puzzle, a game, and it’s for us to figure out the rules.

On each far wall, facing each other, are the two most striking arrangements. On the left we look into the Bode Museum, on the right Mauer Park, both patched together in fragments of paintings. Though forming coherent wholes, they have the sense that they could also be shifted and rearranged. Here we have two versions of history: the high end museum and the flea market, an inside space and outside space, each a collection of objects which reveal the past. The view into the Bode Museum shows plinths holding sculptures that could appear as random as items found lying together at the flea market. The arrangement questions the objectivity of how museums construct collections and therefore shape how we are conditioned to read their contents. 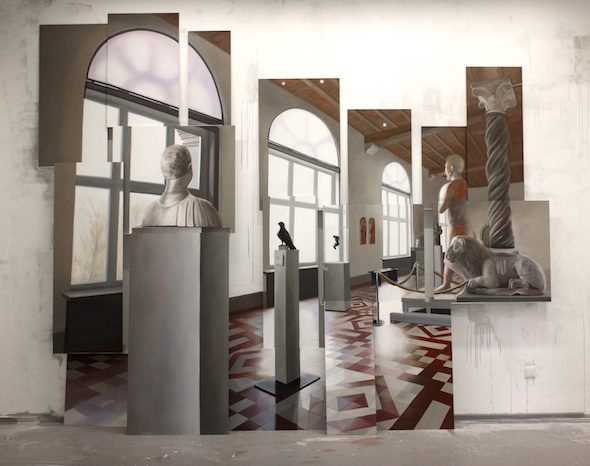 Peering out from between the paintings of paintings wrapped or turned away, small portraits introduce figures where otherwise there are none. Reading the supporting material I soon discover that these are portraits of sculptures in the Bode Museum, though painted as if they could be contemporary figures. They are not people at all, they are stand-ins, objects on a stage. There is something slightly unnerving about this human absence and our realization that we are potentially the actors who have walked onto a set. Equally, the theatricality of the studio implies the artists as active, collecting disparate parts of the city in this space where experiment and play both reveal and question their relations. It is an improvisatory, in-between space, hovering between the private and public of the studio and the gallery. 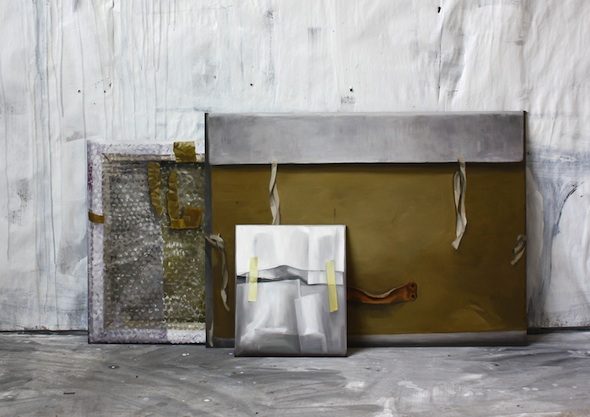 The game of twisting the real, of props and fakery, is precarious. It puts the parts of the puzzle—essentially paintings—in an ambiguous space and begs the question of how this work places itself within its own history, which the Petschatnikov’s are obviously well versed in. There is a tension between inauthenticity and dedication to the craft: these are technically exciting works. There remain many unanswered questions, though not without awareness. The artists have quite literally created both a hall of mirrors and a house of cards, each of which can be seen as strategies to question the construction of historical narrative. This is conceptual painting and embodies the anxieties and uncertainties that haunt the medium. 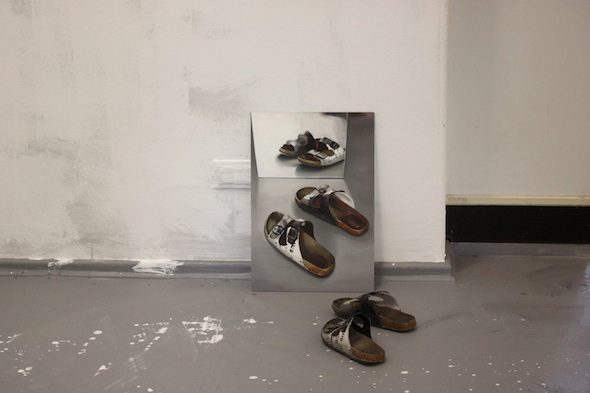 As the complexities of this installation slowly reveal themselves in much the same way as the Tempelhof collection, it is impressive how the work articulates the shifting and subjective nature of histories and spaces, the studio connecting this Kunstkammer to a larger sense of the city, while also placing it somewhere between the national museum and the flea market.

‘Collecting the City’ is an artwork built of fragments and reflections, a poignant echo of a city which was once of two halves, divided and sewn back together: a collection of parts where even the smallest pieces remain loaded with history.

Rebecca Partridge is an artist and writer based in Berlin.