Michael Mandiberg is a Brooklyn-based software artist and media scholar. Mandiberg has written software that parses the entirety of the Wikipedia database and programmatically lays it out into thousands of book-format volumes. In a 2015 exhibition at Denny Gallery in New York, he printed out a selection of the English-language Wikipedia and produced a wallpaper installation depicting the spines of all the volumes. Now, at Import Projects in Berlin, he has recreated the project using the German version of Wikipedia and encountered some interesting disjunctions in the culture of information.

I had the opportunity to meet Mandiberg at the gallery and talk about the installation and the ways in which it represents Wikipedia: as a reflection of contemporary knowledge production, a way of collectively writing histories of the past, and a projection of possible futures and communities. 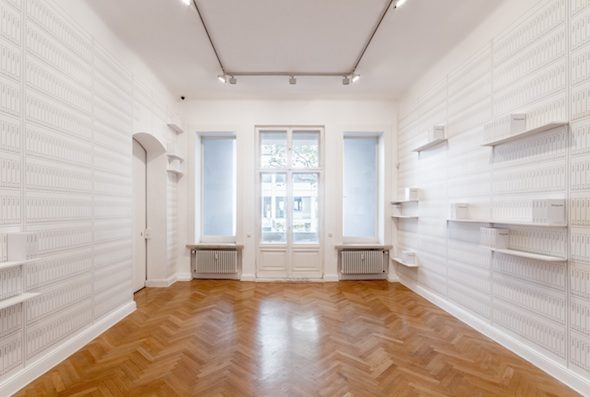 Alan Smart: Let’s begin with the origin myth and then go on from there to talk about how this project might point towards the future. Can you talk about where things came from, where they are now, and where they might be going?

Michael Mandiberg: Yes, this project comes from a variety of places. I started editing Wikipedia in 2009. A group of us at Eyebeam organized an edit-a-thon for contemporary art because we realized that there was very little about contemporary art on Wikipedia. At the time I was doing software art. It was Firefox browser plug-ins. I was working with books as a medium. I was finding all these books just cast off on the street. It was right at this time that this form lost a lot of its value: it lost its exchange value, lost its use value and lost its sentimental value. I was collecting all these books and thinking about books and doing work that involved them as out-of-date carriers of information, and also emotionally charged objects. So, having edited Wikipedia and thought about this corpus, I thought “This is amazing. This is so big. What can I do with this?”

AS: The project maps the space of Wikipedia in some ways but it is not like data visualizations, using graphic diagrams to show how information is structured. What are you showing here and what decisions did you make about how to represent it?

MM: All the pages in Wikipedia are compiled into volumes. During the show I am uploading .pdf files of all of these volumes to Lulu.com and making them available for print-on-demand purchase. This is done using a browser automation made with software used for QA [quality assurance] testing so you can visually watch the upload happen. In the space is wallpaper showing all the spines in the full set and against those representations of shelves there are actual shelves holding about a hundred actual books that have been printed out. These are chosen for the three-letter words on their spines, for example “alt” and “neu” or “DDR” and “EUR”, and questions like “was”, “wer”, and “wie”. The book becomes a useful unit of measure. We understand how much information is in a book. We don’t understand how much information is in a gigabyte. 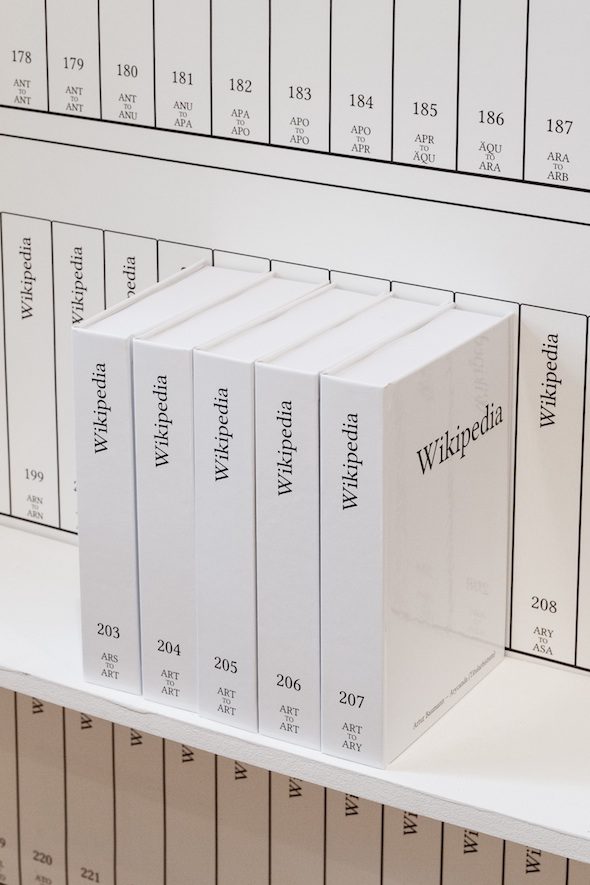 MM: There are several pieces of code and they do most of the heavy lifting, but it has to be attended to. The process takes place in steps and, at each step, I have to configure and fix things when they break.

AS: I’m interested in the break-downs, and the way that the artist ends up being the person who watches and then fixes it when it explodes. It moves it out of affirmative systems art and into an auto-destructive, machine-that-blows-itself-up thing. How does it break down and what are the errors that happen?

MM: Some of them are specific to the German version. When we were building the .pdfs for the first time we encountered a series of errors where the code that was working with the English version just wasn’t working in German, because of different techno-cultural practices on Wikipedia. For example, they use unordered lists much, much more and they make them go very deep. They will make an unordered list—like a bulleted list—that indents around twelve times and this happens repeatedly. The code that we are using is a library that is meant to handle all MediaWiki code but it only handles lists up to eight indents. They never thought it would be an issue. Who would make more than eight indents?

MM: Germans! Right, we’ve got eleven or twelve indents in a genealogical table. So that is a situation where we have to stop and think and put our brains together, and test, and think, try to figure out why this code that used to work perfectly is now breaking, and then figure out how we can move on.

AS: You have been interacting with Wikipedia as an organization, and with Lulu, which is a company that does print-on-demand publishing. Also, you have also made a space for the Wikipedia editors and contributors to show up as a community. Can you explain how this has worked on a social level?

MM: Also included in the show is a contributor appendix listing all of the over 800.000 users who have made an edit on the German Wikipedia. I think this is a really good example of how this has been a productive engagement. It represents how many people have come together to collectively make this massive amount of knowledge and it also represents that community back to itself. I can tell who the Wikipedians are when they come in to see the shows because they immediately go to the contributor appendix and they find themselves.

Working with the Wikimedia Foundation and with Lulu has been really great. They have both been very receptive and supportive. I think that Wikipedia is both one of the most hopeful and most problematic collaborations around. One of the ways that it is problematic is the really alarming gender gap in the contributors. Something like only thirteen percent of editors identify as cis- or trans-women. I’m a cofounder of the Art+Feminism Wikipedia edit-a-thon, which we started about three years ago to work on closing this gap and including more information on feminism and contemporary art. This is important because Wikipedia is both a way of writing history, and an important content backbone for the internet because of its freely available license. If we have a structural imbalance in terms of who is writing, and the content reflects that, this matters a lot as the information propagates.

AS: With both internet art and the internet in general there is this kind of difficult equation of innovative or radical technological forms that then add up to or crash into, new or radical social forms. How does futurism here, or the question of the future, bear on the project?

MM: Yes, and that comes back to peer production, and what was once called ‘user generated content’ (that we now just call social media), which belies the fact that it is actually content that is being produced by users, such that sometimes the labor is alienated and sometimes it isn’t. One of the things I like most about Wikipedia is that it is untalented labor, dedicated to a digital commons that can’t really be enclosed like, say, Facebook. The future is really going to be that conflict over who is doing the labor and who owns what the labor produces. 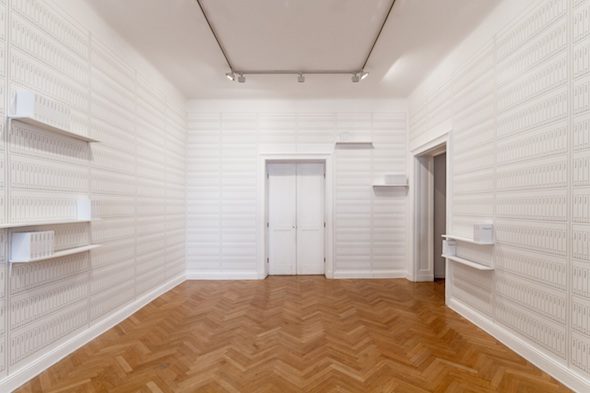 AS: Wow, as much as I’d like to end with that, I have one more question. Why German? What have been the differences between doing the show with the English version in New York City and this show here in Berlin?

MM: The first one was at the Denny Gallery in New York. There are 7473 volumes in the English version while the German one is only 3406. Here at Import Projects it is in an altbau—the words “alt” and “bau” are on the spines of the books – and it fills the entire room. In a way the arches and the doorways are what make the piece. Having to build the bookshelves into the space makes it feel like a completely immersive environment, like you are in a library or in a study.

In terms of the specificities of the German version there are some interesting things besides just the ways in which things are written. As we discussed, there are more lists than there are in English. There are roughly 275 volumes of lists, which is almost ten percent of the material. There is also a whole section of necrologs, which are all the people who have died. Another interesting, culturally specific thing is one eleven-book section, which I printed out, that contains “neu” and “new”. “Neu” ends up being kind of a structural representation of colonialism, modernity, and the industrial revolution but “new” that abuts it directly becomes a kind of linguistic re-colonization of Amerikanische English that has gone back out into the world. So, all of the place names of the new world come back in the form of sports teams and other kinds of…I don’t know what the word is. What is the word for a word that comes into another language like “frisson” in English?

MM: Right “le Big Mac” in French or “cliché” coming into English. There is a word for that.

AS: I will look it up. I will Wikipedia it.