The title of L’Atelier-ksr’s group show ‘unexpected others’ is partially an homage to a Donna Haraway text, the introduction of which states: “The theory is meant to orient, to provide the roughest sketch for travel, by means of moving within and through a relentless artifactualism, which forbids any direct si(gh)tings of nature, to a science fictional, speculative factual, SF place called, simply, elsewhere.” Haraway argues against the stasis of a society ceaselessly in need of identifying an Other, fixing it, and problematizing its differences as unnatural: for who really possesses a direct sight or site of nature? Doing away with this easy, breezy, beautiful binary, ‘unexpected others’ invites us to view nature with a new optics: not as an “Other” nor as an “us,” simply an elsewhere in which we, too, find ourselves. 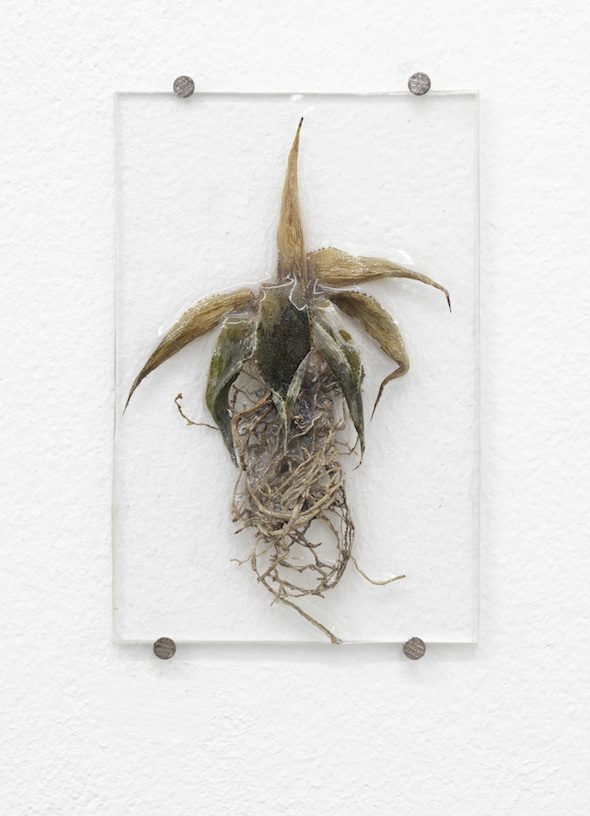 Stefania Angelini, the gallery’s director, described the show’s conceptual space as a “rift.” Such a gap could be equated with the slash dividing (or linking) the “nature/culture” opposition. The liminal gulch, an uncanny valley: some pieces really seemed like they could’ve grown naturally in such a place, one being Adrien Missika’s ‘Jurrasic Park.’ Mounted on the wall opposite the gallery’s front entrance, a little tuft of a plant is doused in epoxy, fixed to an 8x12cm acrylic slide. Seemingly dead, its beige roots in a tangle—but still, strangely, catching cold the glint of fluorescent lighting—the plant looks less like a plant and (by virtue of the title) more like a gestating life form. On an adjacent wall lean Antoine Renard’s 5 altered and untitled aluminum pipes, whose parenthetical subtitles range from ‘Smudging for Beginners’ to ‘Keith Haring Medicine Stick.’ From up close, they’re undoubtedly ceremonial objects. Zigzags and scratches bored into the metal become a kind of asemic writing; they follow a logic very present but elsewhere, outside our understanding. Then again, from the other side of the room, the language simply looks like woodgrain on 5 felled branches. 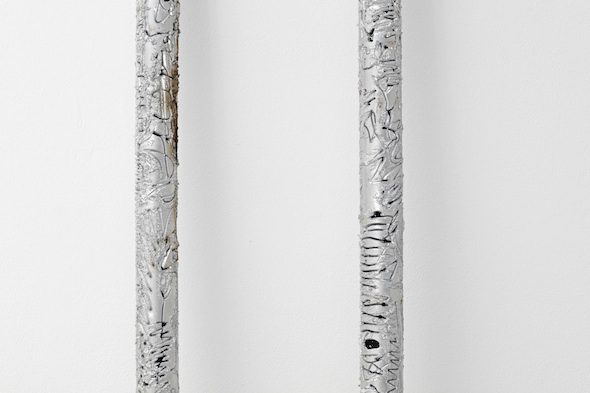 Amongst other entities, Angelini mentioned ghosts, wizards, witches, and shamans as references for ‘unexpected others’—not in any sense of the macabre, but as beings capable of traveling within and through an elsewhere, sin fronteras. If a common nature is glimpsed between “organic/synthetic” or “raw/cooked” with Missika and Renard’s works, Sarah Ancelle Schönfeld’s ‘Shaman’s Coat’ pieces take a similar, liminal view to spiritualism and science. Both coats are UV prints on cowhide, one of which is pinned to the wall at waist height and allowed to drape and fall. A bright turquoise color, maybe found in a stone, but not a strip of cow skin, and still, up close there’s a smell of leather that I may have imagined, and the hairs are coarse. The coat’s image has the definition of a digital print but, in following the drapes and folds, is unreadable. Like a Borgesian or mystic architecture, there are struts, scaffolds, and an identifiable regularity that still just doesn’t add up. Later, I’m told the photo is of a rocket’s ventilation system, but I don’t see Schönfeld “updating” the regalia of an indigenous healer with the atheist’s vessel of otherworldly travel. Nor staging a spiritual ode to the machine. Rather, the artist has merely positioned various binaries at odds with themselves; what is naturalized is not opposition (of analog/digital materiality, or indigenous/interplanetary societies), but the ease with which such dualism blurs when we are allowed to examine it closely: smudging for beginners.

The dialectic somersault many of the works in ‘unexpected others’ perform very often relies on a variation of sight. It’s as if, in seeing these pieces as one thing from up close and quite another from a few meters away, our worldview is similarly shifted, displaced. And one piece in particular, Angelini tells me, is often overlooked: Renata Har’s ‘Each gesture is an anthill,’ installed outside the gallery. The first time I saw ‘unexpected others’ a few weeks ago, I, too, almost missed it. Projected onto a patch of the courtyard’s fern fronds and garden plants is a bluish, rippling static, the kind of visual white noise an analog TV set would pick up. What struck me seeing ‘Each gesture…’ for the second time is that I actually remembered the projection to be a video of ants. Har’s gesture mimics the movement of insects, both particulate and unified, but the metaphoric (myrornaskrig or “war of the ants,” what such static is called in Swedish) also became real in hindsight. Har’s piece in the courtyard reminds me that our taxonomies invest so much faith in clarity of sight, how we perceive and apprehend difference. Like a counterargument, gazing out the window and into the courtyard, is Schönfeld’s other ‘Shaman’s Coat’: two eyes obscured by brown cow spots, sourced from a shot in ‘2001: A Space Odyssey’. Naturally. 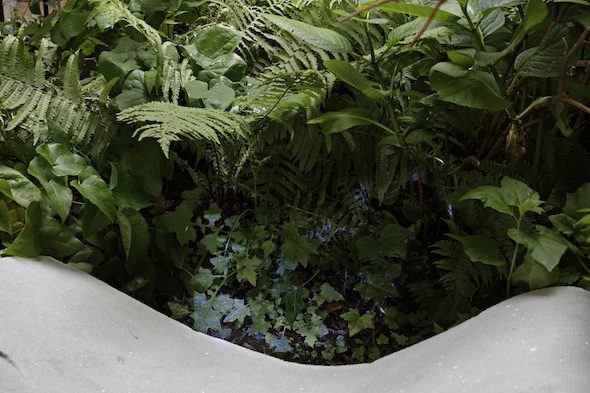