The title of this exhibition takes its name from a work by Martin Kohout, a series of prints of book covers placed behind gold privacy filters that promise their readers the capacity to survive renovating, being a softball mom, being a working parent and, in one case, a guide for surviving ballroom dancing, directed at “every man”. Kohout’s filters mean that the covers shimmer periodically in and out of legibility, but seeing the gilded book covers, it struck me how many areas of life are now considered potentially life-threatening. The ironic intention of the authors of these texts—all quite real, as a later internet search attests—perhaps belies a deeper truth, that so much of contemporary existence is understood as performance; a performance subjected to scrutiny and judgment. You may not pay with your life for your lambent passion for ballroom dancing, but to engage in dancing for a reason as simple as fun-seeking, well, that’s not very 21st century, is it? 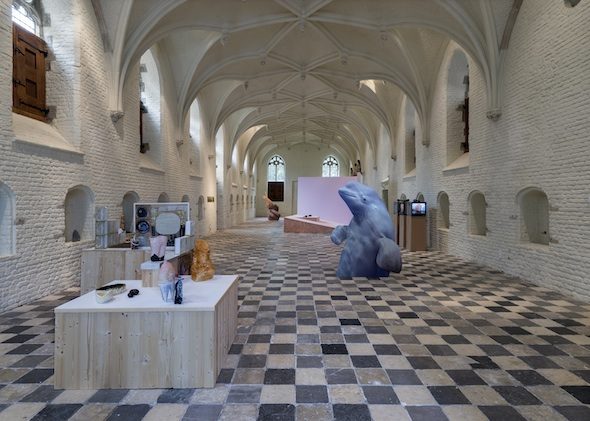 Kohout’s work is only one among the group of vibrant contemporary works included in, to give the exhibition and the work their full titles, ‘Survival Guides for Ballroom Dancers, Renovators, Softball Moms, Working Parents and Troubled Folk in General’. The exhibition is hosted in Vleeshal, a small art space adjacent to the grand gothic town hall building in Middelburg, Netherlands, which, as the name suggests, had an earlier career as a meat market. The nexus of art, performance and commerce is a key element of the exhibition, as is the nature of labour. Particularly engrossing in relation to this confluence of themes are a series of works by Laure Prouvost. In ‘Taking Care’ (2014), Prouvost’s voice whispers a litany of endearments and assurances of love as her hand caresses or protects an invisible object of affection. The work manifests, more or less literally, the ways in which love becomes a labour. Other forms of domestic labour feature in Prouvost’s videos as well. In ‘Stong Sory’ (2005), Prouvost tunelessly sings the narrative of a birthday cake-baking gone hideously wrong. In ‘For a Better Life’ (2006) she sings to a bemused congeries of cows some of whom, coincidentally one must suspect, break into a flurried, ramshackle attempt at copulation. In the ambitious 2013 work, ‘Grandma’s Dream,’ she recounts the hopes and disappointments of a spirit-grandmother, a familiar figure from her wider body of work. Notable among the visions Prouvost’s Grandma nurtures is the following, “In Grandma’s dream, conceptual art would fix the kitchen.” Prouvost’s Grandma is contrasted with her Granddad, who creates an art her Grandma neither needs nor understands, but which, no doubt, creates the labour void in which something or someone other than conceptual art is responsible for repairing the kitchen. 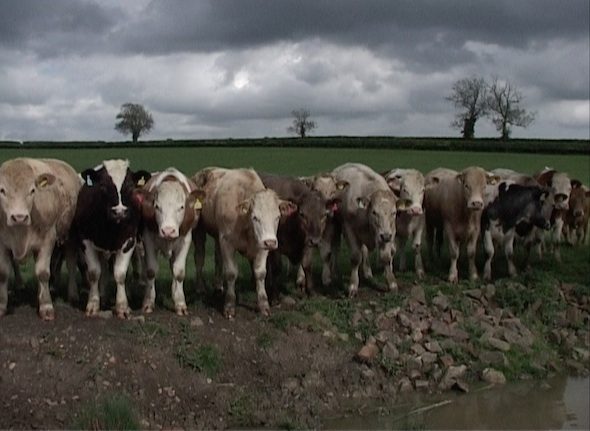 The distinction between performance, labour and work is also a notable theme in Moyra Davey’s ‘Fifty Minutes’ (2006), in which Davey considers a number of intellectual and personal topics in short vignettes. One of the most conceptually rich is an exchange with her therapist about how the therapist is to be compensated for his time. Davey notes that he is paid for his time, but she spends the same amount of time he does in the therapy session, but that her time is valued and understood differently. One form of thought and exchange has economic power while the other is merely an “externality” in the parlance of economics, something perhaps not irrelevant to the overall economy, but unable to be accounted for in specific models of cost and profit.

It would be remiss to fail to mention the space itself as an element of the exhibition. The placement of these works in a former meat market lends a haunting quality to Katja Novitskova’s ‘Approximations,’ digital prints featuring animals mounted on aluminum cutouts. The surrealistic quality of a human hand emerging from the weathered, medieval tiles of the floor of Vleeshal and holding a snail for examination takes on an almost palimpsestic dimension, as if the ghosts of the past have returned from the Middle Ages to pick up some escargot for dinner. Meat, potential or actual, becomes a prop when placed in a market hall and, necessarily, entails a kind of performance, the theatre of sales and custom. Novitskova’s snail may be frozen in space and time—its performance is essentially an aesthetic one—but its totemic character summons networks of association that are still very much alive and which loom over every element of contemporary existence. The press materials for the exhibition speak about the importance of ritual and structure in coping with the mediation and dispersal of experience that characterizes 21st century life. We may not know exactly where we are, or, indeed where we came from, or where we are going, but as the pieces in this exhibition seem to suggest, our work and our labour will precede us and, perhaps, remain after we are gone. Thus, it may become both guide to and evidence of our survival. 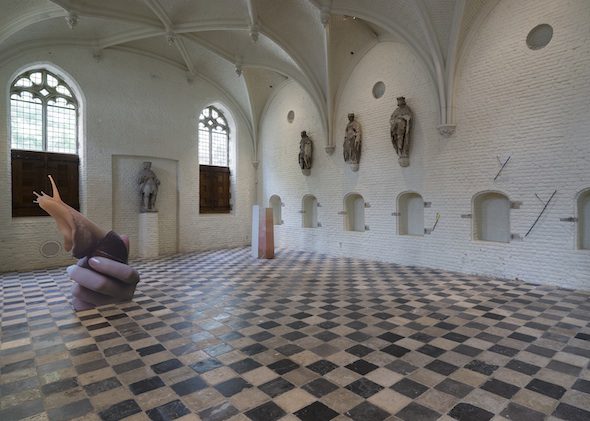