GCC is a collective of delegates based in the Arabian Gulf, including Nanu Al-Hamad, Khalid Al Gharaballi, Abdullah Al-Mutairi, Fatima Al Qadiri, Monira Al Qadiri, Aziz Al Qatami, Barrak Alzaid and Amal Khalaf. Their name is taken from the English abbreviation for the Gulf Cooperation Council, a transnational, political and economic union. GCC engages in a multi-disciplinary practice that explores the construction of identities and systems across the purview of contemporary Gulf society, including its bureaucratic, cultural and diplomatic arenas.

On the heels of their lauded piece at the ESMT venue of the 9th Berlin Biennale, GCC will present a video installation for Kraupa-Tuskany Zeidler at abc—art berlin contemporary this week.

Berlin Art Link: GCC was initially formed in the VIP lounge of Art Dubai 2013. Can you elaborate on its inception?

GCC: We had known each other socially or had worked with each other in smaller clusters in the few years prior to the formation of GCC. Before officially forming GCC in 2013, a few of us were approached to collaborate on a major state-sponsored art project and the rest of the group was brought in to help develop the proposal. Our collective proposal ended up addressing the zone where culture meets the state’s ‘image management goals’, especially in the context of competitive international art biennials. It was politely rejected, but by that point we realized that we shared many ideas. We also knew that we worked well together, and we had different individual resources which, when pooled together, would give potency to what we have to say. Our projects are, in essence, outcomes of conversations, and when we’re not working towards a specific project, we’re maintaining that very lively ongoing conversation.

GCC adopts the guise of an inter-governmental body, and makes use of the images and objects that circulate in social and political spheres making work that is both inspired by and addresses the contemporary culture of the Gulf. GCC employs ministerial language to create a range of works that focuses on the notion of achievement and the rituals that mark accomplishment as well as the physical objects that embody them.

The letters are not what convey the message; it’s not an acronym for us. We look at the word GCC as an image, like a .jpeg file, not as a text. What is also nice about the name is that it’s an acronym for so many things. It keeps it extremely anonymous. It could mean Glendale Community College or Grupos Cementos de Chihuahua. It gives us a bit of a shield so that we are not just referencing political bodies. Though it has been interpreted that way.

BAL: You describe your collective congregations as ‘summits’ and your members as ‘delegates’. How does the application of this specific terminology inform the way you work and interact within this setting? How do these summits unfold?

GCC: We gather as often as possible in different locations around the globe, and we call those gatherings ‘summits’. In terms of producing our concepts, sometimes it’s circumstantial: a specific member is in the country or city where a work is being manufactured or shown, and so they carry a heavier load of the work. Other times it’s determined by expertise, where some members are more knowledgeable about architecture or audio, so they take the lead and then come back to the group to deliberate and make decisions about concepts and aesthetics. Although there is a linear timeline that you can trace in the production of works, the ideas and research are not really generated chronologically. So we produce based on opportunities and contexts. Sometimes one project leads to another, and other times a project has been developing in the background and then comes to the foreground when we have the right opportunity to produce it. 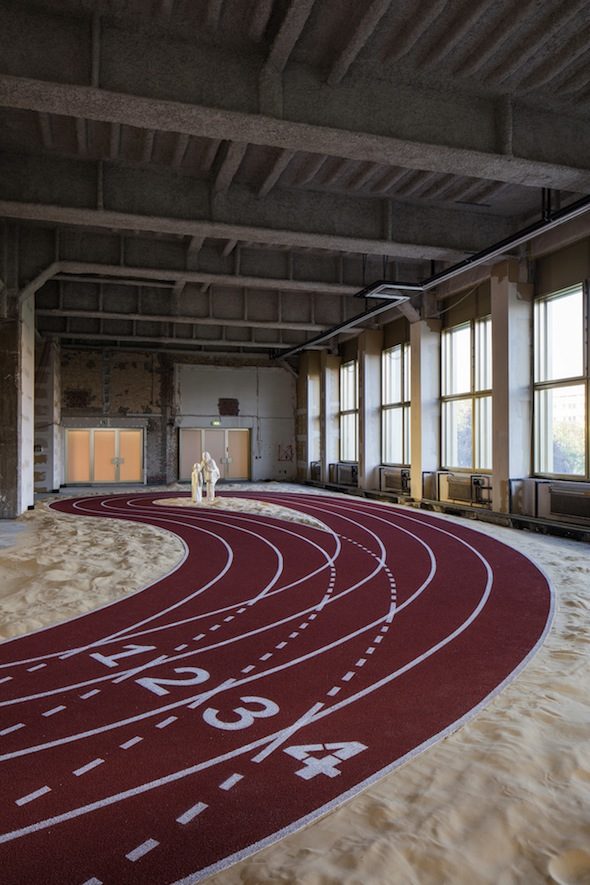 BAL: Can you talk a bit about your installation at the Berlin Biennale, ‘Positive Pathways’, which addresses an emergent culture and economics of optimism?

GCC: This work materializes an aspirational new-age lifestyle that has emerged in Arab countries in recent years, one based on the central tenet of positive energy. An amalgamation of feng shui, Reiki, Quantum Touch, and corporate happiness solution strategies have captured the people’s imagination from the individual level to the offices of governments and corporations.

Such a “belief in the power of belief” manifests a deliberately optimistic life scheme. Its proponents circulate on daytime talk shows and YouTube channels, while a Silicon Valley-inspired, new-age office culture has infiltrated the offices of governments and corporations. With conference tables that double as ping-pong tables, feng shui consultants on staff, relaxation zones, and government-sanctioned “brainstorming sessions”, happiness and productivity go hand in hand in the Gulf’s contemporary office culture. The state predicates its achievements on the success of its individual subjects; it aims to mold the individual into a happy, and therefore productive and capital-generating, member of society. But what are the implications of applying the same strategies meant for individual “improvement” to the mechanisms of the state?

The rise of the positive energy movement was a gradual response to the radical change brought on by contemporary globalization to the region in the forms of urban development, car-dependency, and the ubiquity of mass-produced food and the deeply unhealthy lifestyles it engenders. For many in the region, these capitalist eventualities have culminated in a spiritual vacuum and a crisis of the body and of the mind. Although belief, and the power of belief, are embedded in orthodox religion, these positive-thought philosophies offer users the ability to tactically hone and deploy this belief to achieve their goals. Many aspects of new-age teaching contradict the “cultural values” of the region that include somber religious practices and a general cultural propensity towards melancholy. Practitioners occupy the mainstream by employing pseudo-scientific rationales and methods that help to circumvent accusations of sacrilege.

By sanctioning positive energy in the home and workplace, undesirable and unproductive aspects of society are obfuscated as they are deemed “negative energy”. This is not simply a passive activity in which people ‘turn the other cheek’ or adapt to negative circumstances, but a proactive effort to modify behavior. The co-option of the positive energy movement by the state and its allies in the corporate world has revitalized the status-quo with a seemingly progressive new age veneer. Critical discourse can be deemed not “solution-oriented” enough and therefore impedes capitalist processes; within this system, the state can drown criticism with the polarising noise of positive energy.

Our work for the Berlin Biennial comprises two sculptural figures set in the center of a running track. A woman faces a child and performs a Quantum Touch healing gesture on him. The woman’s potentially ominous yet maternal hand gesture creates a harmonious tension with the boy, and refers to the mysterious dynamic between the mother and child in the Pietà theme of Renaissance art.

Meanwhile, the floor’s surface mimics a running track. The track—a ubiquitous, municipally-sanctioned intervention in the urban landscape of many Gulf cities—is a public signifier of competition, healthy lifestyles, a designated architecture for self-improvement. It takes over the room, blending into patterns and lines of synergy and ripples of happiness. Within this environment the body of the state is folded into the individual bodies of its subjects, personified in the traditional paradigm of the woman as the bearer or reproducer of the nation. In fact, one cannot exist without the other, as individuals are massified into a populace that is an extension of the ruler/state. This is exemplified in a sound element that features the original Arabic language recording of an Arab leader espousing the virtues of positive energy alternating lines with an English language translation by a news radio personality. The body of the state and the citizen’s individual body are two aspects of the same phenomenon, endlessly perpetuating itself. 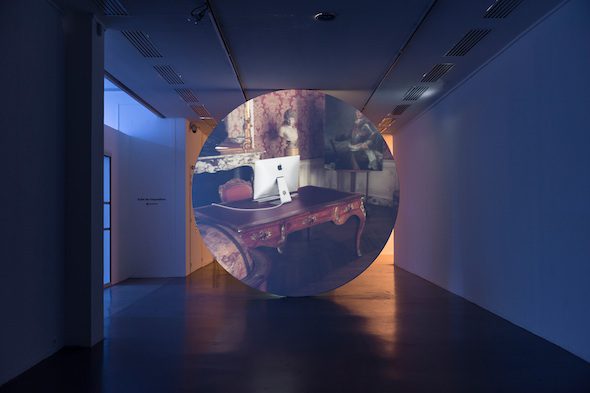 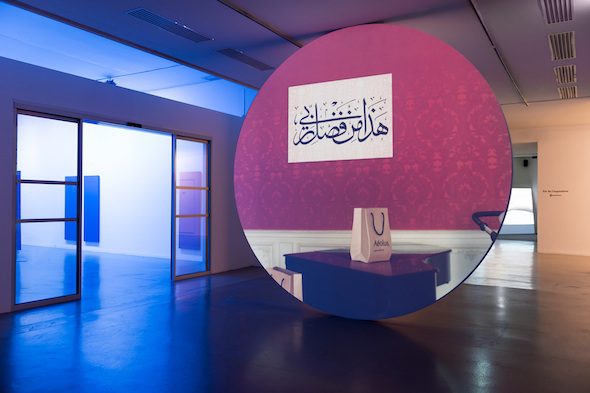 BAL: What do you have planned for your participation in abc?

GCC: The immersive video installation ‘L’air du Temps’ (2015) consists of a roving shot across a recently purchased and renovated hotel particulier in Paris. The film allows the viewer to peer inside an inaccessible space whose foreground is digitally transformed with contemporary interventions. These digital objects materialize against footage of the actual space, personifying the psychic and physical interaction of seemingly opposed forces. GCC probes the tenuous relationship between the organic and the mechanical as symbiotic, while the film makes no judgment as to whether the interactions are mutualistic or antagonistic in nature, the moments in which the new and old transition seamlessly, or seem to interrupt one another give the sense that there is no apparent benefit or detriment to the original space; magnifying the notion that colonial discourse centers around unequal and uneven forces of cultural representation involved in the contest for political and social authority in the world order. The work was originally shown at the Musee d’art Moderne de la Vie de Paris in a show titled ‘CO-WORKERS’.