Entangled, amorphous masses of color—from earthy brown to electric blue—inhabit the space of Galerie Barbara Wien in an exhibition of Nina Canell‘s interplaying static and kinetic sculptural installations. In their spatial and temporal gaps, the perceived emptiness between connections becomes palpable, revealing the substance of a pause. Canell’s work draws on associations between organic and mechanical systems, exploring both human and non-human transfers of energy in its various forms—with complex networks of electrical wires and cables doubling as human nerves and vessels—excavating the materiality of communicative processes. 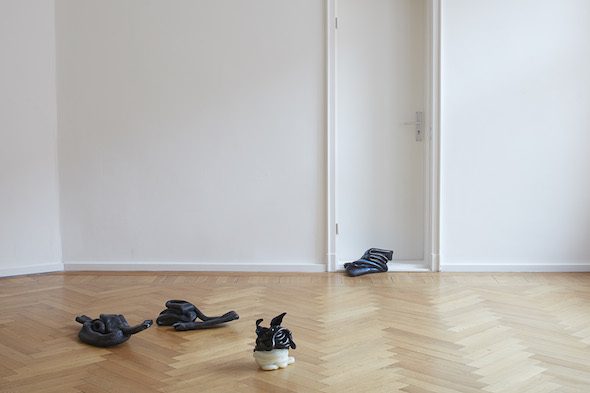 Slithering snake-like out of a doorway, crumpled up on a window ledge or plopped down in the middle of the room, the nine components that comprise ‘Shedding Sheaths’ are fused and motionless yet appear only temporarily suspended, caught in a moment of transition. Found and culled from the outskirts of Seoul, South Korea, the sculptures are partially melted down, emptied and discarded insulating sheaths from fiber optic cables, in the process of regeneration, physically shifting from disuse to reuse. Through their state of being in between decomposition and reformation, the objects—their uncertain forms and unstable matter—articulate the process of transmission that they are intended to facilitate. Collapsed and deflated, the sheaths no longer function as outer skins, rather they suggest internal organs: the memory of their former outlines preserved in the lingering coils and twists of their current manifestations.

Though sheaths are external, protective encasements, they often inhabit spaces obscured from visibility, concealed within the depths: networks of cables that run underground, living tissue that envelopes the body’s internal systems. Canell’s sheaths are also the byproducts generated and disposed of by these systems, as something external to them, simultaneously evocative of both human and mechanical waste. This destabilized relationship between interior and exterior, and the intersections of human and digital networks, emerges in articulations of the body’s physical functions as well as processes of thought, memory and language. 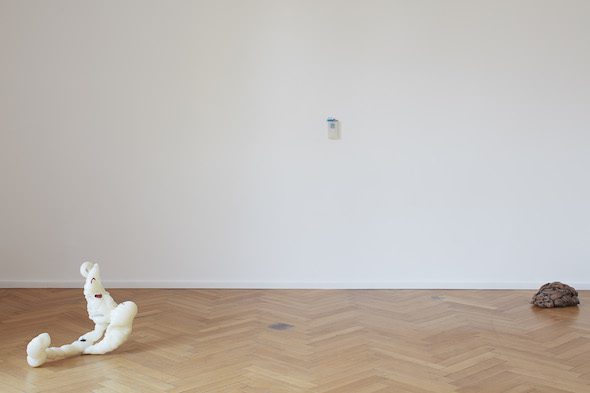 Utilized in telecommunications, and in medical examination of the body’s internal functions, fiber optic technology involves sending light signals that bounce off the interior of a thin, transparent tube, transporting information from one end to the other. In Canell’s sculptures, the close proximity and connectedness fostered by such systems of communication are made tangible by the sheaths’ wrapped, melded formations, which bridge the distance of their expansive lengths. However, this body language of folding inward, as opposed to extending outward, also indicates a disconnect between entities, a resistance against contact.

The optical and physical processes that initiate exchange are reiterated and further disrupted by subtle associations present in a small-scale wall sculpture occupying the same space. ‘Tip of the Tongue’ consists of a dictaphone embedded inside a translucent silicon block, atop which rests an opened paper wrapper cradling a two-tone bouncing ball. The blue coloring of the unraveled paper is not only reminiscent of the blue border of the Olympus dictaphone’s screen, but of some of the sheaths placed on the floor below, likewise replicating their form and function as outer coverings. Left partially exposed in this unwrapping is the small bouncing ball, which also repeats the blue tone on one side; while its other half mirrors the muted red circle of the dictaphone’s record button, forming a visual linkage between elements. As opposed to a direct translation of the red circle marking the device’s button, the pinkish hue of the ball reproduces the sign in its mediated state, subdued in tone by the cloudiness of the silicon that encases it. 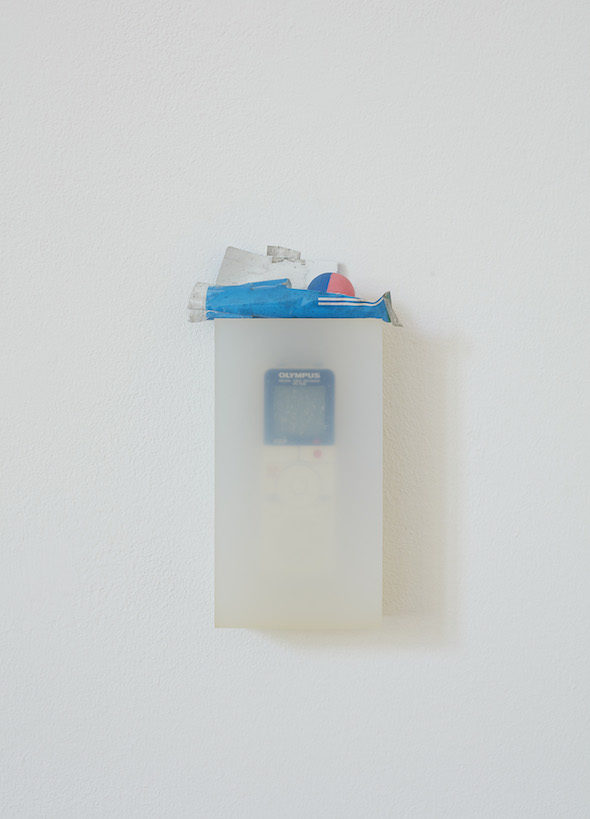 The enclosure also mimics the device’s functionality: as a technology that records, it holds and suspends words, frozen in time. The work’s title, ‘Tip of the Tongue’, points to the workings of memory in relation to language, referencing the phenomenon of experiencing a tangible presence in the form of the ungraspable: the inability to recall a word from the depths of memory, even though it feels close to the point of expression. The dictaphone’s recording is partially visible, though it cannot be accessed. The semi-opacity of the silicon makes it hazy and unreachable, and the thoughts contained within remain obscure. This murkiness further inhibits reflections of light from bouncing off the surface: transmission is blocked. 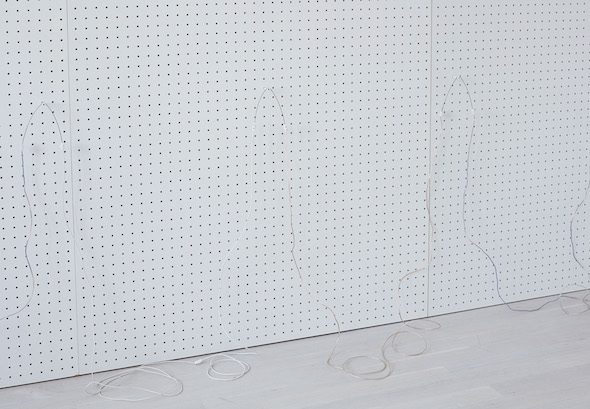 Time and memory likewise pervade the installation housed in the adjacent space of the gallery. ‘Flexions’ is a work done in collaboration with Robin Watkins, a long-term collaborator of Canell’s. The installation comprises electrical equipment piled and amassed to configure more tangles of cords and wires, and free-standing white pegboard walls through which thin memory wire is passed or hung. Tonal variations emitted from a frequency generator activate the space, while the subtle outlines of memory wire appear stationary against the pegboard backdrop. The patterning of its perforations make focus difficult, as vision soon wavers and blurs. If patient, however, small manoeuvers and gestures of the wires can be perceived. On one segment of pegboard, hovering low near the floor, wires draped at regular intervals—a visual representation of electromagnetic waves—appear static and unchanging until they are reactivated by heat and temporarily rise up, only to recede back to their slackened state. 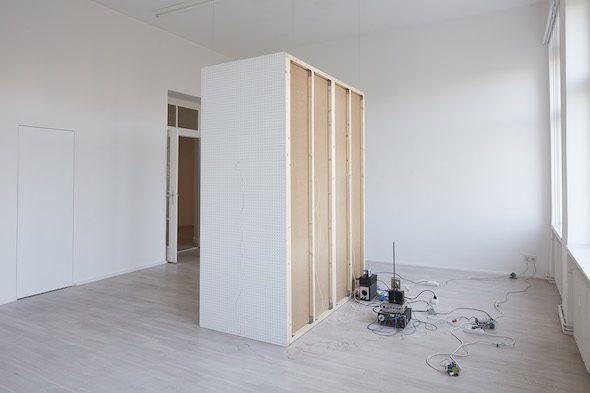 Memory wire—referred to as such because of its ability to ‘remember’ a pre-configured shape when heated, activated by passing electrical current—is also known as muscle wire and is used in robotics to simulate bodily motions and muscle contractions, igniting a spark of life within lifeless matter. Through this act of intermittent remembrance, however, the wire demonstrates its inherent forgetfulness. Canell has similarly described the fundamental forgetfulness of cables as integral to their function, as they carry the current. This functionality is challenged by its own obsolescence, as the short-term of the current becomes even shorter with the high speed of technological development. Emergent yet already obsolete, shaped by memory in the process of forgetting, the expressive systems at work, or suspended, in the installations manifest through the viscosity of their own substance, always precariously balanced between solidity and disintegration.