Aurora—Dallas’ biennial, public and free art exhibition—will take over the Dallas Arts District again in 2017. For this year’s Prelude, the team behind Aurora, including co-founders Joshua King and Shane Pennington, rolled out a preview exhibition that was just as potent as last year’s full event, but on a smaller scale. 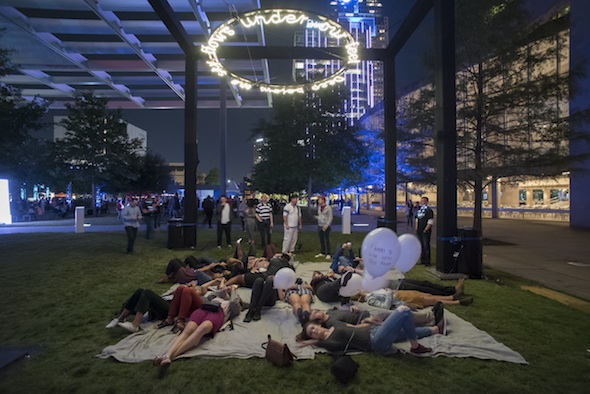 Shilpa Gupta: ‘Deep below the sky flows under our feet’, installation at Aurora Prelude 2016

A trio of talented and experienced curators with global backgrounds were invited for this year’s event: the Dallas Contemporary’s Justine Ludwig; Art Director of Da Vinci Creative 2017 and Adjunct Curator of Art Center Nabi, Dooeun Choi; and Artistic Director of the 5th Moscow International Biennale for Young Art, Nadim Samman. The three curators took over the exterior of the Meyerson Symphony Center and the AT&T Performing Arts Center, installing 10 major works atop buildings, on the lawn, and in collaboration with attendees themselves.

With only 10 artworks instead of dozens, the edited layout of space and install was one that allowed the viewer to stop and enjoy each piece on its own. When I walked through Herman Kolgen’s ‘Unwind’ installation, curated by Choi, I got to explore the artist’s manmade lung, a breathing apparatus that reacts to the environment around it, including onlookers. A piece like this might have gotten lost at last year’s event. The smaller scale event allowed for foot traffic to flow around the piece, and facilitated stopping, standing, and observing the living piece of technology before us. Aurora has always existed on the opposite end of the television show, ‘Black Mirror’, which shows the terrifying and inevitable intersectionality between technology and humanity. Aurora focuses on the way technology pushes new media forward into alternative realities, within a public setting. It is an advancement from the sculpture’s gallery context. We are able to not only view, think, and critique what is in front of us, but do so while the art integrates and warps the reality in front of us. 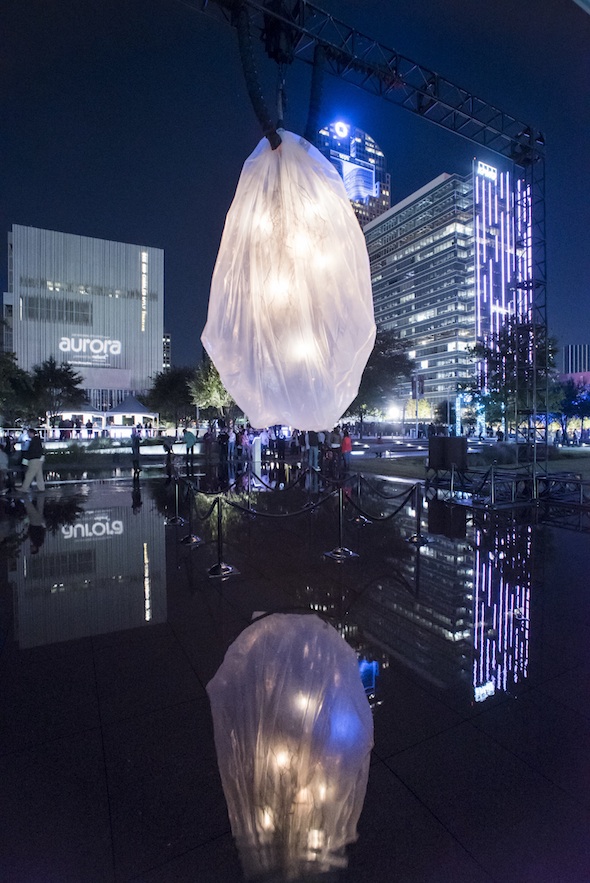 Choi also brought in artist Antonin Fourneau, whose piece ‘Waterlight Graffiti’ won the popular vote for attendees. While not terribly theoretical, it served as an experiment with ephemeral tagging, much like graffiti, where users made temporary markings with a water brush that activated thousands of LEDs, to bring the light to the surface. Just about every demographic in attendance interacted with this piece, including many graffiti artists who spent time tagging their crews and names in the installation, bridging contemporary street culture and technology that could possibly eliminate the illegal elements of graffiti practice.

For his curatorial contribution, Samman brought Quayola to Prelude, an artist who embraces and mimics nature. On the side of the Meyerson Symphony Center, the London-based artist projected a digital mapping of lush trees and forest life, titled ‘Pleasant Places’, on the concrete exterior. Looking up at the piece from the ground level was a strange thing: we realized the absence of nature around us, as well as the planted greenery surrounding the arts district that felt less real than the projected greenery did. Coordinated to an electronic soundscape that cued the switching of imagery to and from designated panels of the building, the digital landscape shifted from view, taking on new meaning from different vantage points. The tension created from this piece was palpable, making the viewer think about the concepts of “reality” and “artifice”. It was curious to see the Meyerson charged almost as an living organism, although they were obviously projections. There was a science-fiction element to the dynamic, with the possibility to create real flora artificially in the not-too-distant future. 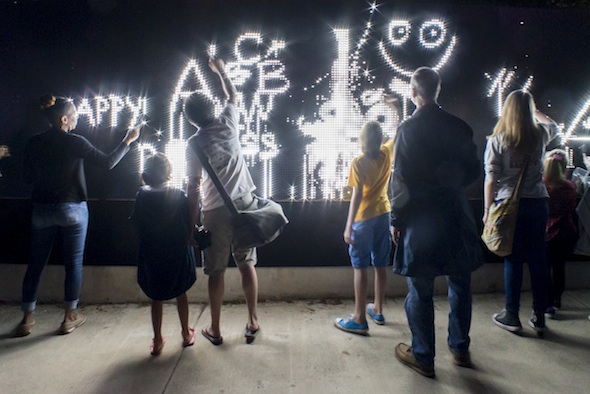 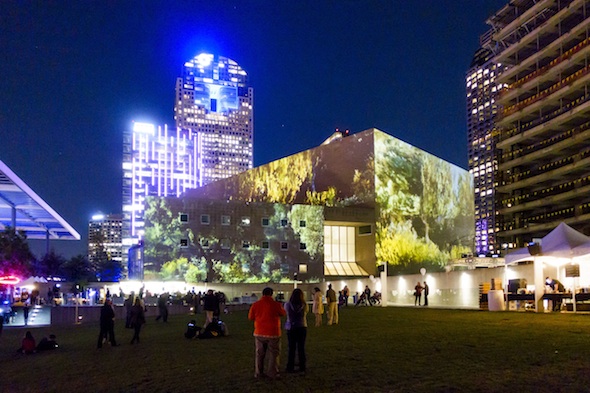 While each curator brought an engaging edge to this year’s Prelude, it was Dallas-based Ludwig whose curation of Indian artist Shilpa Gupta’s two installations, ‘Deep below, the sky flows from our feet’ and ‘I want to live with no fear’, which left the most visceral impressions. ‘Deep below’ invited viewers to sit under the installation, where the words formed a circle above their heads, the sky and clouds at the center of the circle. It was playful and provoked the viewer to think about cosmic significance and insignificance. There was a sticky subtext of hope embedded within the piece, which could be seen as hokey, yet came out rather subtly amid all the violent measures the world is presently twisted up in. It is the piece ‘I want to live with no fear’ which stuck with me well after the event. Situated away from the other installations, by the outside main performance stage, volunteers passed out hundreds of white balloons with the piece’s title written on them. Visitors took one balloon each and were instructed to tie it around their wrist, so as they walked through the rest of the event grounds, the message of hope that runs through Gupta’s work permeated throughout the arts district.

As I walked into the event area upon arrival, I was greeted to people flowing in and out of the grounds, all attached to a little white balloon that, when deflated, read as a powerful message of defiance. There was something deceptively simplistic about Gupta’s work that drew me to it. It was the perfect approach to the large crowds of mostly new art-goers. It made me think about the level of cynicism that these type of art events, designed for the masses, are often unjustly attacked with. As I walked out of the park, my balloon half-deflated but still floating above my head, I looked around at the entirety of the park still gripping their balloons. It was a rare occasion when the splendours of my own selfish desire for safety complimented the good of the group. A work that can go beyond even today’s most perverse version of partisan identification is what the hopeful call transcendent. 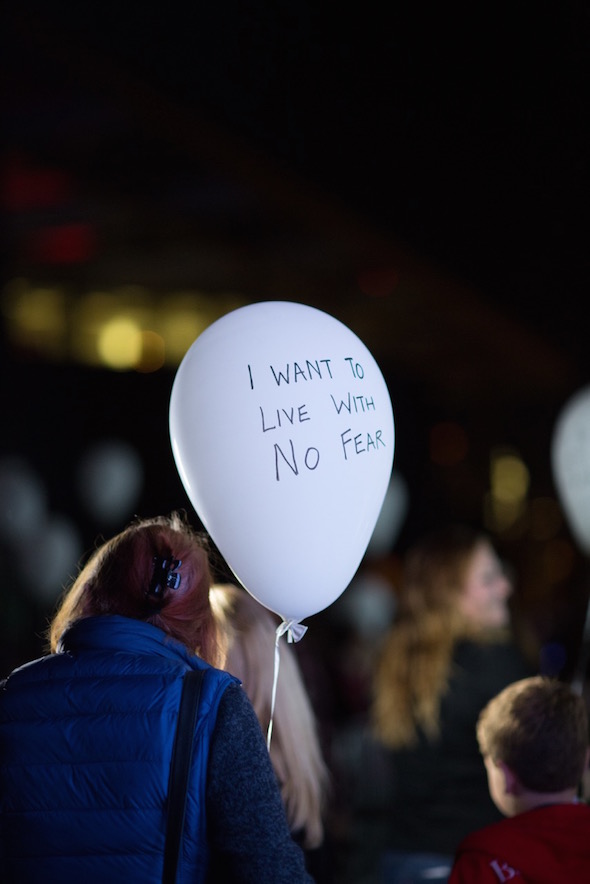 Shilpa Gupta: ‘I Want to live With No Fear’ // Copyright Paperlyte