An aquamarine patterning, reminiscent of kaleidoscopic imagery, covered the stage for Adam Linder’s ‘Kein Paradiso’. Unmistakably playing on the theme of camouflage, the intricate set design by collaborator Shahryar Nashat transformed the space into an enclosed, illusory world. Suitably complimenting this abstract habitat, the piece opened with a simple jump repeated by a male body at the centre of the stage. With this stripped-back presentation of movement, Linder invited the audience into his constructed reality, in which the body appeared to dissolve into form. 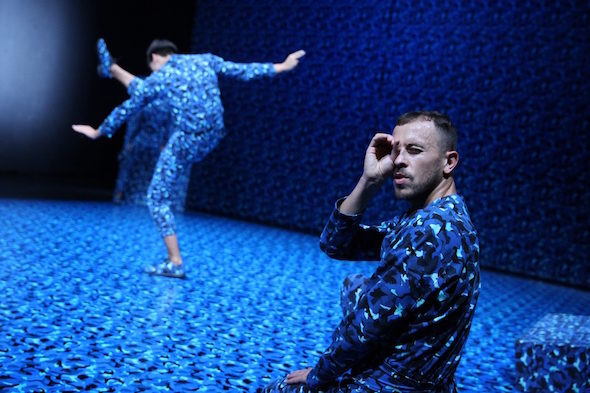 However, the purity of abstraction was soon relinquished as co-performer Jennie MaryTui Liu began to speak into a megaphone, her voice uncomfortably amplified. Immediately, the piece’s performance mode became outwardly theatrical, as an underlying emotive drive propelled her words. Similarly, while presenting his solo, Stephen Thompson incessantly clung to an imaginary cigarette; a peculiar gesture as the use of make-believe props directly references the dramatic arts. Linder’s choreography became hard to pin down. Although he explored geometric angles of the body and fragmented sequences in time, he evidently did not seek to pursue the creation of abstract movement suggested by the opening scene.

To add to the confusion, Linder constantly reminded the audience of his detailed research into abstraction with the use of texts drawn from post-modern figureheads Rainer, Cage and Boulez. In particular, choreographer Yvonne Rainer’s work marks the prominent shift towards abstraction within contemporary dance in the 1960s. Her piece ‘Trio A’, described by Sally Banes as a ‘catalogue of uninflected movements’ whereby ‘time is flattened and de-theatricalized’, is widely recognised as a landmark piece in the history of contemporary dance and perhaps an example of the ultimate abstraction possible within movement. Unlike the typical dynamics of phrasing within modern dance and ballet, the minimalist objective within dance was to perform task-like activity with a neutral performance stance, with an emphasis on equality and consistency. Of course, abstract movement today does not have to look like Rainer’s ‘Trio A’, but Linder’s consistent references to her work inescapably provoked questions in regards to his own compositional objective. 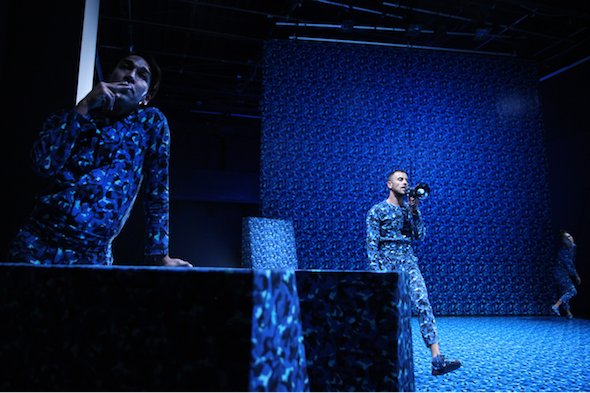 As ‘Kein Paradiso’ unfolded, the thematic focus of the piece became gradually less clear. The piece sat somewhere between the search for abstraction and the search for theatricality, with a frustrating noncommittal relationship to either. In this way, the audience was neither swept away by the emotive intensity of a theatrical performance nor engulfed by a meditative state of reflection as offered by minimalist, abstract dance. Instead, the viewer, much like the work, got stuck in the middle as aesthetic suggestions were made but none were fully pursued.

Linder seems to have become lost in his research; with his eagerness to comment on dance history and present the impact of abstraction on choreography today, he has neglected his own artistic input and independent value as a choreographer outside of those who came before him. Instead of actively experimenting with what he had, namely the incredible set design and versatile dancers, he compressed the historical weight of post-modern dance into a confusing bricolage of disparate elements. The direct references to Rainer, Cage and Boulez were unnecessary and quickly became superfluous. And paradoxically, the creation of excess is exactly what abstraction in any art form strives to counter.