On Friday evening, with a full, and perhaps too optimistic, schedule of openings planned for the night, I set off for my Mitte tour of Gallery Weekend Berlin 2017. Of course, a single night jammed packed with exhibition openings is maybe not the best way to fully absorb the works on show, but the buzzing atmosphere of Berlin’s gallery districts on opening night is half of the fun. Being enveloped by the hoards of people at Alexanderplatz as I made my way to my first destination gave me a taste of the crowds I would encounter throughout the night. 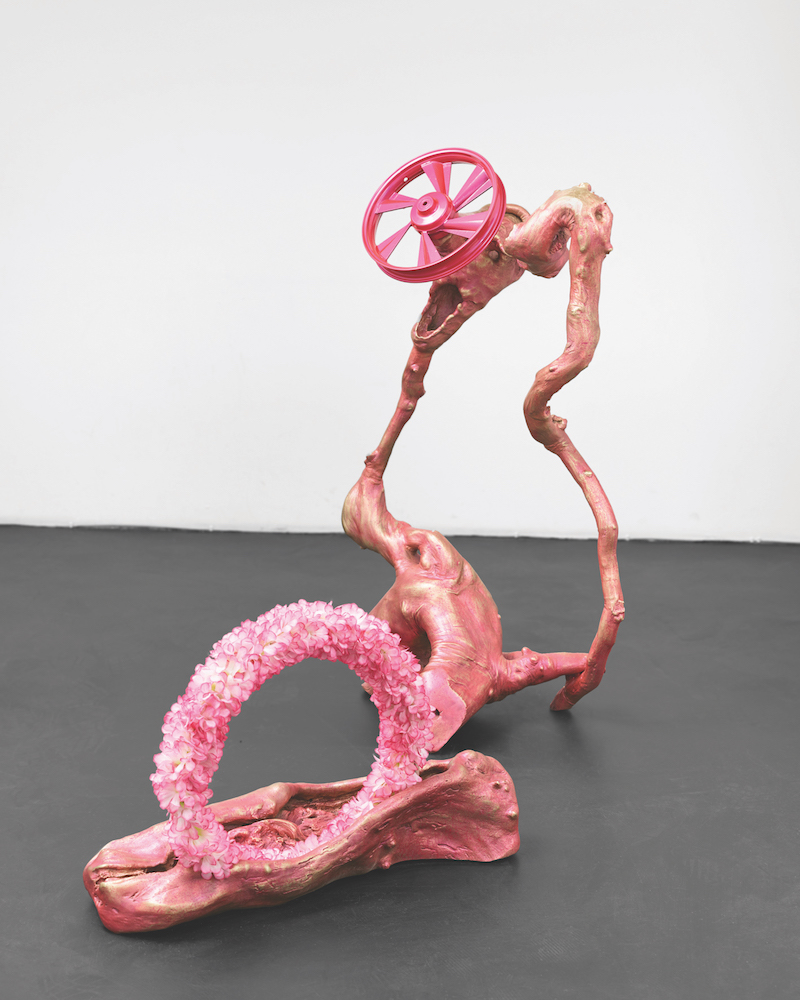 Kraupa-Tuskany Zeidler is housed in one of the iconic tower blocks of the 1960s GDR redesign of Alexanderplatz, where a rather gaudy entrance gives way to narrow halls punctuated with door after door. The gallery itself is a modest space; the three white rooms are an unassuming backdrop against which the works by Guan Xiao came to life. ‘Living Sci-Fi, under the red stars’ is the artist’s version of the bizarre reality our world has become. She envisions an artificial ecosystem—ruled by technology, media, mass production, and mass consumption—as amalgamated sculptural forms combining car tyre rims, artificial flowers, and paint jars with fabricated natural forms resembling rock, driftwood, or unidentifiable organs.

The sculptures seem organic and whole despite their juxtaposed parts, like alien fauna or creatures from a futuristic dreamscape. Particularly ‘Enjoyable relationship’ (2017), in which a pink, shimmering acrylic coat covers a vulvic mass and bulging twig-like limbs of brass. The pink tyre rim and wreath of plastic flowers seem as much part of the strange entity as the fleshy appendages. In a gallery space that was already filling up fast with visitors, the sculptures seemed at home in the crowd, rather than contrary to it. They behaved as a warped mirror, especially in conjunction with the video work ‘Dengue, Dengue, Dengue’, a seemingly chaotic video montage of a vast range of visual material, both strange and familiar, that suggests a global stream of consciousness. Named after an infectious disease, the three-channel video pitches humanity’s collective output and behaviour as contagious habits that are contaminating the world. 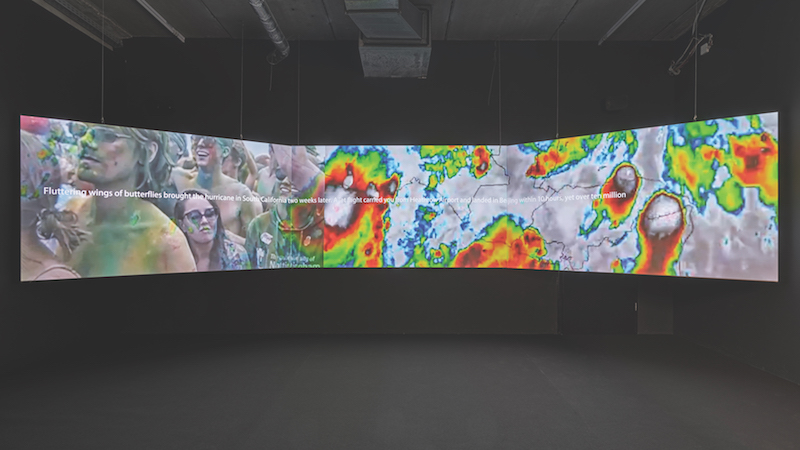 My next stop was a 15-minute walk away at KOW gallery, which, by the time I arrived, was nearly full to the brim. I immediately weaved through the crowd, found a place on the floor, and settled in to watch ‘Love Story’ (2016), a video installation by Candice Breitz. The first film I saw, playing alone in a curtained space, was unsettling and confronting as it quickly became clear that the larger-than-life video projections of Alec Baldwin and Julianne Moore were telling first-hand accounts of difficult and dangerous journeys, fleeing the oppressive conditions of their homelands; stories clearly not their own. 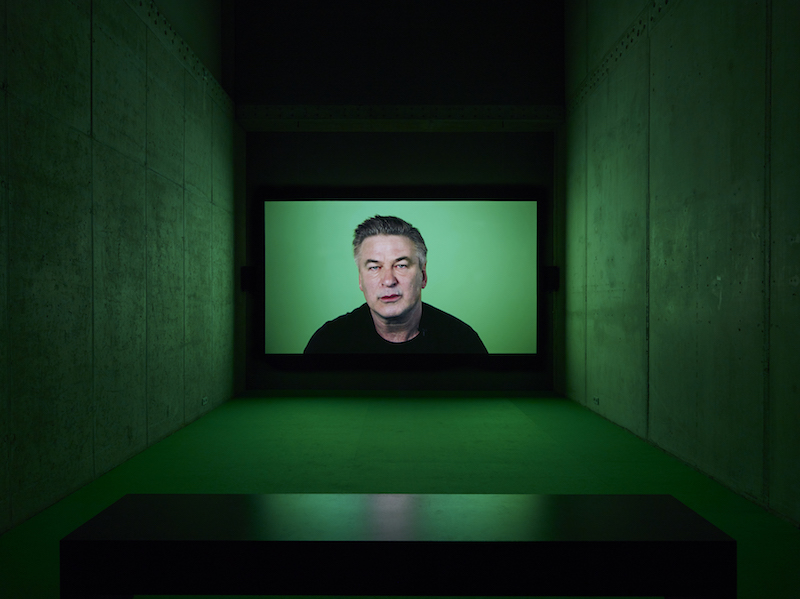 The inappropriateness of the casting was so blatant as to suggest a parody of the western media paradigm of cultural appropriation and misrepresentation. The narratives of six unseen individuals were spliced up and mingled with frequent cuts between the two Hollywood giants, producing an incoherent yet emotional tale of impossible journeys and horrific conditions; of violence, fear, loss, love, and strength. While being disturbed by the obvious inappropriateness–lines such as “stories like these, they’re part of real life” and “I don’t want to be disguised when I tell my story” coming from Baldwin and Moore’s mouths turned my stomach a little–I eventually found the performances quite moving, for which I, and I assume my fellow watchers, felt somewhat ashamed. This is exactly what Breitz is aiming for. She uses a predictable route to empathy, via the untrustworthy source of western media, to point out its own absurdity and the injustice it does to the real faces and voices of these stories. On the floor below, six films with headphone sets play the six original interviews that Baldwin and Moore retell. A packed gallery weekend opening night was not an ideal time to get a chance to hear the interviews, so I’ll definitely be coming back here on a quiet weekday.

After navigating the heavily populated sidewalks of Augustraße, I arrived at Sprüth Magers, feeling like it would be hard to top the previous two exhibitions. Having spent quite a bit of time watching the Breitz installation and with a strict schedule to keep, I headed straight for my most anticipated show of the three on offer, Pamela Rosenkranz‘s exhibition ‘She Has No Mouth’. Scanning the walls of the cavernous main gallery, I nearly walked straight onto the large circular sand installation covering a third of the gallery floor space. The paintings lining the walls are of tabby cat markings and other cat related imagery, and each is coated in a translucent skin-tone layer of paint, uniting them all with the fleshy pink hues of the sand, lit from above with a subtly changing sunset spectrum of colours. In this new series of works, Rosenkranz continues her artistic preoccupation with biological and evolutionary mechanisms, invisible to us, that linger and adapt from prehistoric times. Leopard print, for example, elicits a fight or flight response in humans, harking back to when big cats were our natural predator. 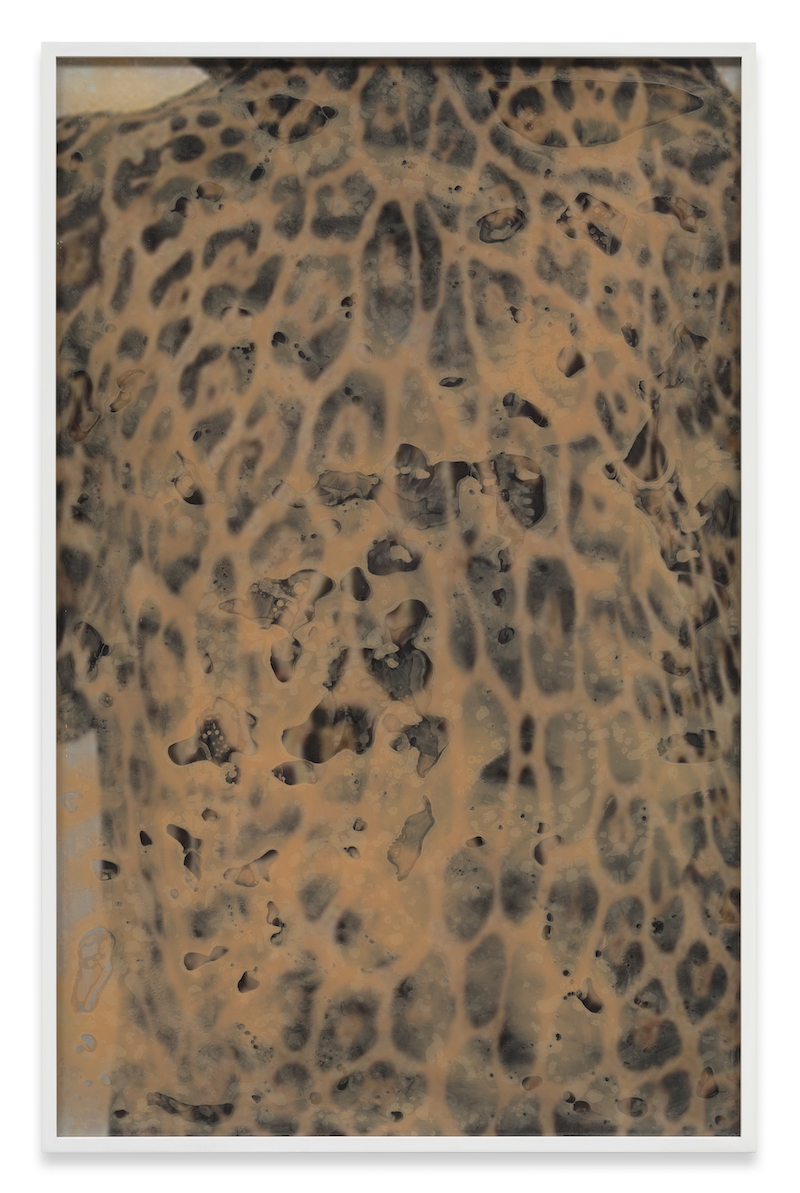 Smell and sound also featured in the multi-sensory installation–though these elements would surely be more effective on a quieter evening–adding more layers of invisible stimuli. Pheromones and cat meows trigger the human brain with the effects of relatively recent evolutionary workings that strengthen the relationship between humans and cats. While I didn’t notice any acute stimulated responses happening in me, the innate animalistic nature of humans is a refreshing subject to explore amidst a contemporary art climate obsessed with our dependence on technology.

With the ticking clock of the impossibly short hours of opening night looming over me, I raced to my final destination. Nestled behind the construction sites and busy multi-laned roads of Fischerinsel, Kewenig Gallery is like stepping into another place and time. The grandiose and ornate architectural features of the gallery were in stark contrast to the austerity of the previous galleries. Kimsooja‘s exhibition ‘Geometry of Breath’ brought me once again to the theme of migration. Her ‘Bottari’ (2017), circular bundles made from used bedcovers, are based on the Korean tradition of bundling a person’s most important belongings in a wrapping cloth, often when leaving a native place. The Bottari lined the stairwell tracing a path to the contemporary themes of migration in works such as the print of an enlarged fingerprint from the series ‘Geometry of Body’ (2013-2016), taken from a security checkpoint at an American-Mexican border crossing, and the video portraits of aging immigrants being forced out of their neighbourhood by rising rents in ‘An Album: Hudson Guild’ (2009). In this context, the gradually blurring anonymous figures walking by in the video work ‘An Album: Havana’, (2007), reminded me of the nameless and faceless refugees behind the voices of Alec Baldwin and Julianne Moore at KOW. 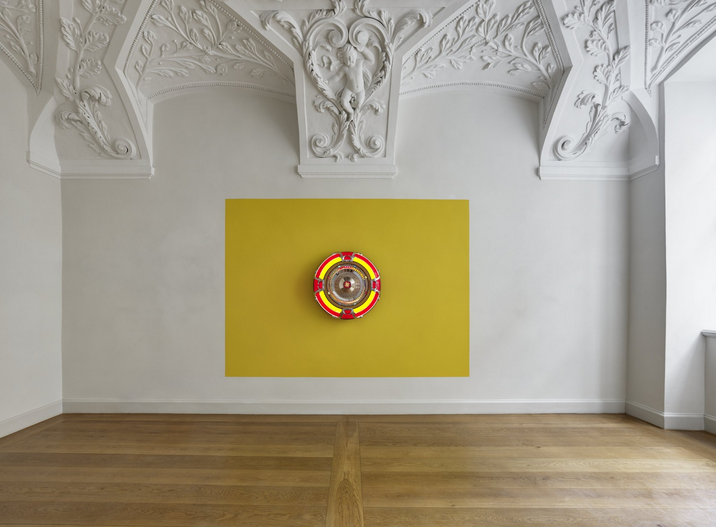 The other strong thread in ‘Geometry of Breath’ focuses on the artist’s own body. Plaster arm casts, a thoroughly used yoga mat, breath amplified by a jukebox and recorded as embroidery, hair, and worn clothes, make up the corporeal facet of Kimsooja’s work. Themes of body and meditation, of aging, migration and displacement, seemed a little at odds with the ostentatious historical decor. But despite this, I left intrigued and excited to see the second part of the Kimsooja exhibition at the Kewenig Warehouse location in Moabit another day, along with the dozens of other galleries on my intimidatingly long list for the weekend.