My tour of Kreuzberg’s Gallery Weekend exhibitions was far less hectic than in previous years; this time, I was prepared. With a group of friends in tow—or meeting along the route laid out in my shareable Google map—I managed to visit nearly ten shows on opening night.

We began our expedition in the two-gallery complex on Prinzessinenstraße, at Klemm’s. This year, the gallery was showing the work of Berlin-based artist Viktoria Binschtok, in an exhibition mysteriously titled ‘Cutting Straws at Midnight’. Binschtok’s large-scale photographic ‘Cluster’ series feature associative pairings of visually-related imagery, culled from Google image searches. The artist inputs her own photographs and receives similar images—in content or colour—in return, which she then crops, re-composes and manipulates into a final product. The sleek results look like stock photographs staged for advertising campaigns.

Along the wall opposite the entrance to the gallery, Binschtok’s ‘Skyview’ (2017) is perhaps the most deceiving of the exhibited works. What appears to be a fairly standard image of a skyscraper cityscape, presented in sectioned frames, up close reveals a stack of staples in the lower left corner image. The detailed shot of the staples blends seamlessly with the skyscrapers, complicating our notions of scale. 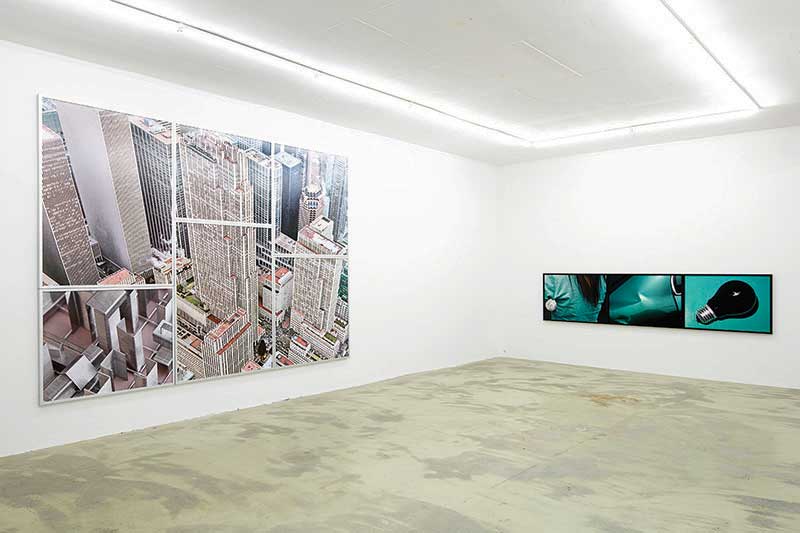 Next door at Soy Capitán, the aesthetic changes dramatically with an exhibition of Grace Weaver‘s paintings, entitled ‘super busy’. Weaver’s colourful, cartoonish characters always seem to express an unexpected contemporary malaise. The show’s title, when visualized in her works, reads as tongue-in-cheek; several of the narratives—a young woman pensively drinking coffee-to-go or hunched over a laptop—point to a kind of busyness that is immaterial or unquantifiable, perhaps a generalized productivity that produces little of capitalist value. Self-improvement and childcare are among the rendered forms of employment in Weaver’s work, both of which, while decidedly time-consuming, are rarely compensated monetarily. ‘super busy’ suggests a text message shot off quickly in response to a request for one’s time, and Weaver’s paintings present what the sender, caught in the moment, might look like. 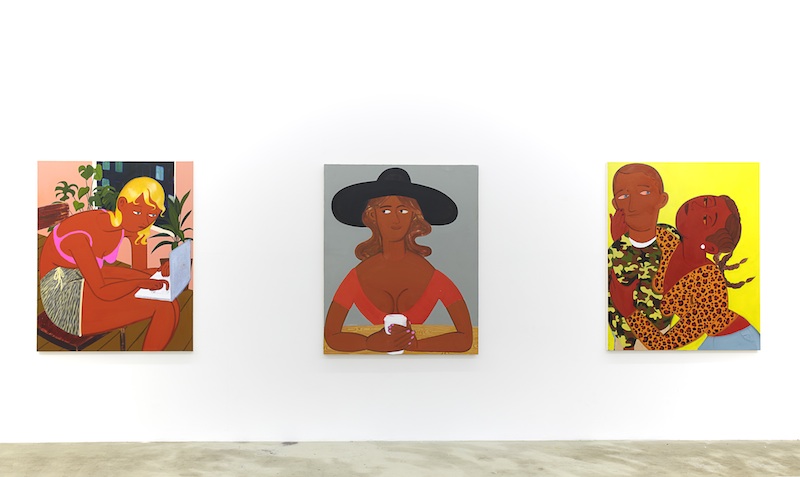 Leaving Prinzessinenstraße, the tour continued to the widely recognized hotspot of Kreuzberg’s gallery program, König Galerie in the former St. Agnes church. It almost doesn’t matter who is showing at this location, since the building itself, its recently renovated two-floor gallery space and sculpture garden, tend to be a draw on their own. But this year’s exhibition of Anselm Reyle‘s kinetic sculptures in the upper nave gallery provided the extra incentive. Curatorially, it’s hard to go wrong in that space, and yet there are certain works that are decisive fits.

Reyle was well-known for his large-scale abstract paintings, before he publicly declared a hiatus from his art career in 2014. Now, he has returned to be represented by König, with a series of elegant, hanging metal sculptures that act as wind ornaments in his exhibition ‘Eight Miles High’. The different geometries spin lightly in the space, creating dynamic shadows on the concrete walls, and mesmerizing visitors with their slow-motion hypnotic quality. 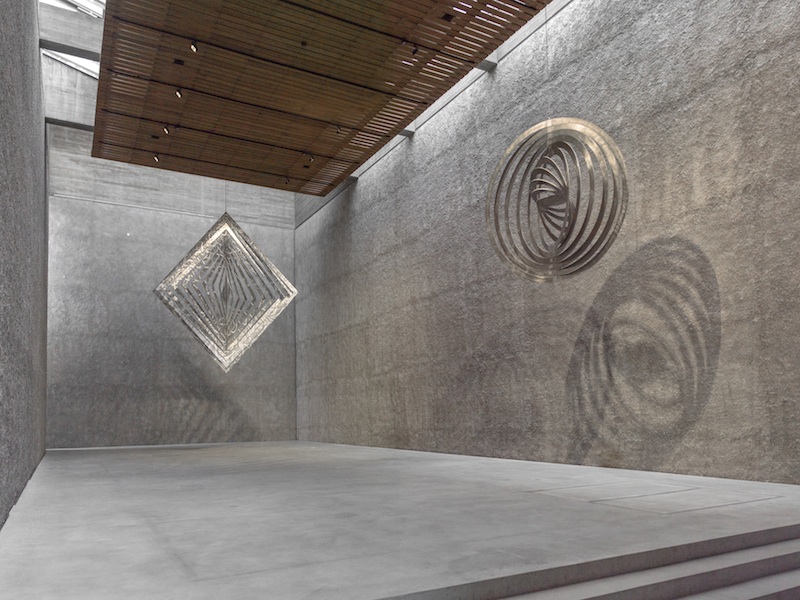 At Konrad Fischer Galerie, in another complex of galleries on Lindenstraße, Belgian artist Edith Dekyndt‘s aesthetically simple exhibition ‘They Shoot Horses (Part Two)’ references the Horace McCoy novel and Sydney Pollack film adaptation of a similar name, ‘They Shoot Horses, Don’t They?’. The story chronicles a dance marathon that took place during the Great Depression. Dekyndt presents black-and-white archive footage of one such dance marathon, painfully evoking the exhaustion and near-hallucinatory motions of the dancers as they remain upright and moving for days on end, in their quest for fame. Dividing the gallery space is Dekyndt’s long, white velvet curtain pierced through with sharp nails. The installation suggests the excruciating backside of bourgeois attempts to master decorum and social hierarchy. 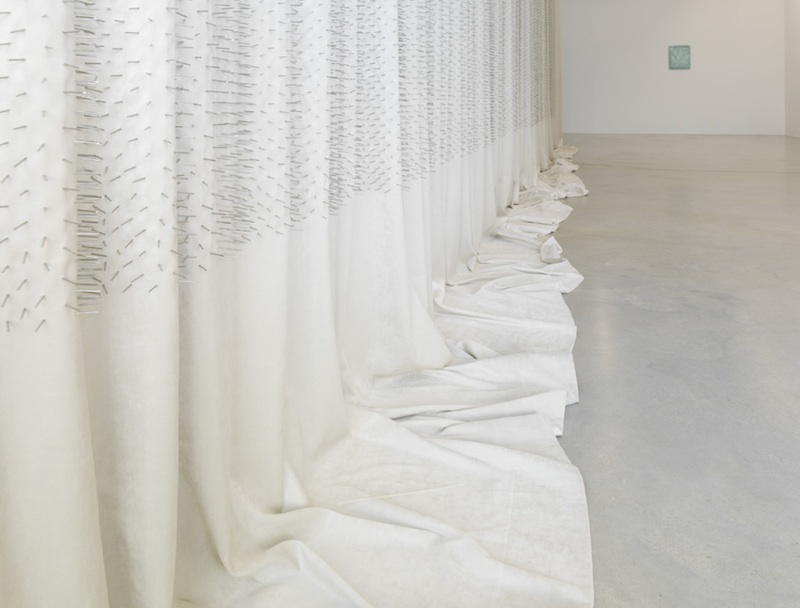 Finally, we ventured over to Markgrafenstraße to the final strip of Kreuzberg gallery stops laid out on my map. One highlight among several interesting exhibitions was the re-created 1970s installation ‘Work that Disappears When the Viewer Tries to Approach It’, by Teresa Burga at Barbara Thumm Galerie. A small isolated, dark room in the gallery space could be entered two at a time, while a guide explained the nature of the piece; the light installation at the end of the room was controlled by sensors throughout the space. One person at a time was invited to approach the coloured lights, which would change configuration and, finally, turn off completely the closer you got to the work. Moving around the room at random, you could control the timing and visual output of the lights. Burga, who is regarded as the most influential female Peruvian artist working today, was a major player in the Peruvian avant-garde of the ’60s and ’70s. The installation appears alongside complex visual renderings of poems by Borges. 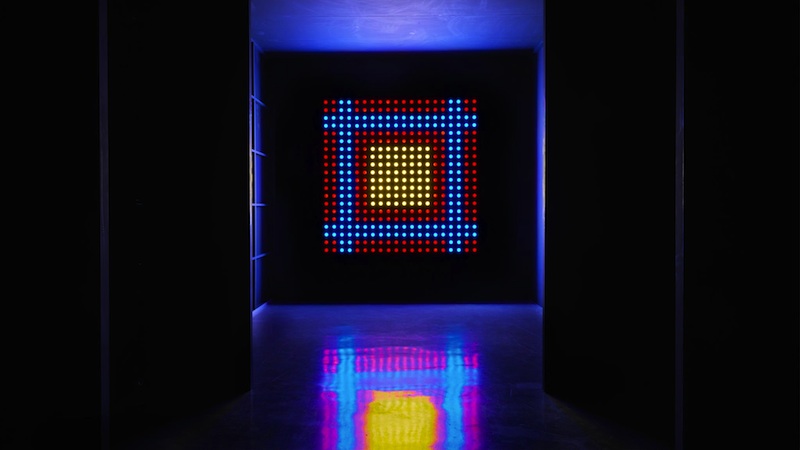 A strong representation of women artists in Kreuzberg galleries this year made for an interesting thread of concerns. Whether tackling political issues of unpaid labour, domesticity and class, or working in more abstract terms, many of the exhibited artists managed to address pressing contemporary topics in aesthetically novel ways.