The most visually impressive work in Warren Neidich’s new exhibition, ‘Die Politik der Farbe – The Politics of Color’, is a huge cloud of words in bright neon tubing connected by arrows. I could see the chromatic cluster through the window of the Kunstverein am Rosa-Luxemburg-Platz as I crossed the street. Entering the gallery, it became clear that the words Neidich has chosen to include in ‘Pizzagate’ (2017) are non-sequiturs: as seemingly arbitrary and unrelated as top Google search terms. We read ‘Alt-Right’, ‘4CHAN’, ‘MARINA ABRAMOVIĆ’, ‘HILARY CLINTON’, ‘HUMAN TRAFFICKING’. Juxtapositions can be funny, absurd or sinister – and, just as with Google top hits, these effects also carry the alienated quality of a technological accident. (I am reminded of YouTube offering me a hopeful Clearblue pregnancy test advert while I’m trying to listen to a pop song called ‘Crack Baby’.) 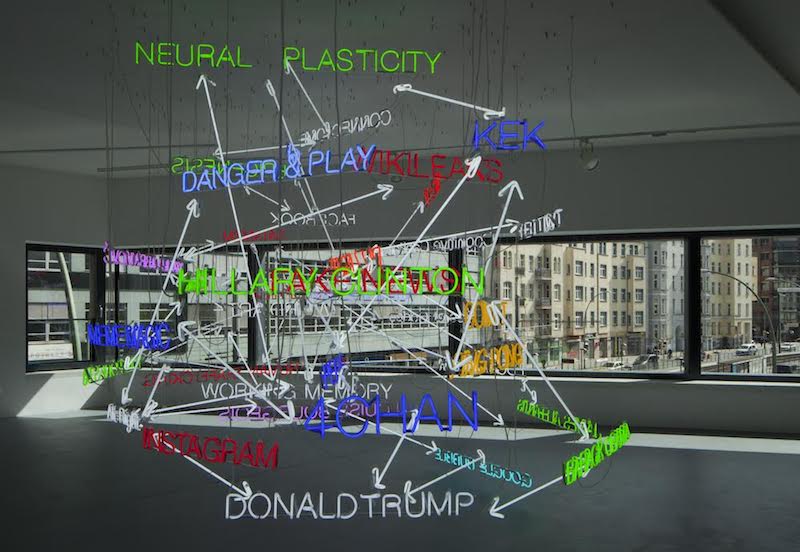 In the public hallway downstairs is a complementary piece, ‘The Statisticon Neon’ (2017). The piece is a response to the monumental Joseph Beuys installation, ‘Das Kapital Raum’ (1970-77), currently housed in the Hamburger Bahnhof. An ultra-modern flow diagram of obscure cognitive processes and their relation to phenomena like ‘FAKE NEWS’, ‘INFOTAINMENT’, ‘SHAMANISM’ and ‘SOCIETY OF CONTROL’, is presented in bright neon. The exhibition program highlights the neural shifts that have been triggered by the rise of the internet in the 40 years since Beuys made his work. The 21st century is described as the ‘century of the brain’, with an attention economy that develops ever more invasive advertising methods and an constant connectedness that means we never really stop working.

The Beuys comparison is a thought-provoking one that doesn’t end there. ‘Das Kapital Raum’ was put together for the 1980 Venice Biennale, but Beuys had already used many of its components (including 50 blackboards with chalk markings and diagrams) in previous artistic projects. The installation included many other objects: a grand piano, a spear, plugged in tape recorders and video projectors, and a microphone. English translations of the title range from Capital ‘Room’ to ‘Region’ or ‘Space’, and the ambiguity is telling. Is this a room made to house Capital, or do the objects themselves render it a ‘Capital Space’? I prefer the second option, which causes us to look closely at the disparate-seeming objects and ask what makes them Capital. They are, of course, all stores of value (some of them, the grand piano for instance, are worth a lot). But more compellingly, they are stores of creative potential. 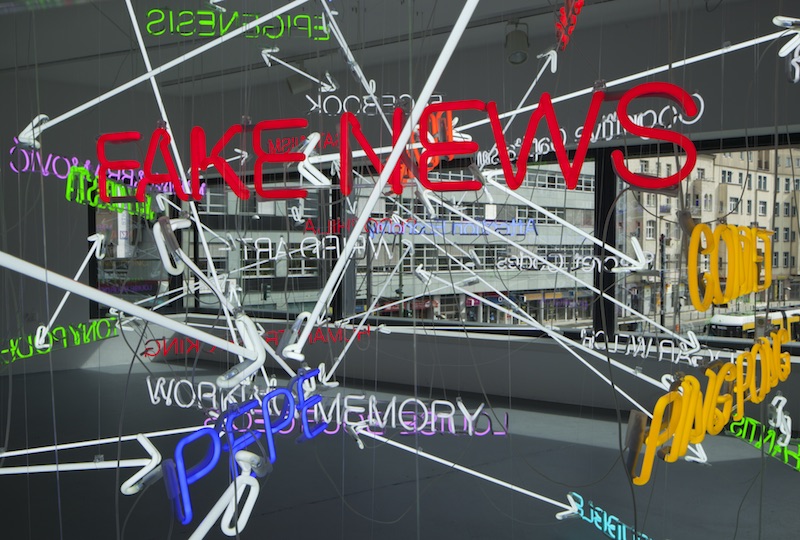 This socially hopeful interpretation of Beuys’ installation as a rewriting of Capital into a sort of playground of creative (rather than profitable) potential makes Neidich’s reflections on the present seem scary and depressing by contrast. ‘Pizzagate’ presents words as dead ends rather than carriers of potential: their meaning has been congealed a million times over on the internet so that they become static and meme-friendly, rather than objects of play. ‘The Statisticon Neon’ suggests that we are too neurally hardwired to the working capitalist system to do much spontaneous creation. The two video pieces in the exhibition, ‘The Search Drive’ (2014) and ‘Comet Ping Pong Pizza’ (2017) similarly delve into the infinitely recursive world of the internet, where ‘fake’ news stories get millions of hits and we can go on Facebook while simultaneously skim-reading a major WikiLeaks scoop and streaming a bad film called ‘War Games’.

But Neidich’s work doesn’t stop here. While he does make art about the info-chasm of the internet, and the ostensible impossibility of rewiring our trained brains, he does not give up on political art-making. The ‘Color of Politics’ doesn’t only refer to the bright random neons of the installations. In ‘Double Jeopardy’ (2016), Neidich presents three blank Hollywood Walk of Fame stars. Next to each is a red neon name: Bertolt Brecht, Hanns Eisler, Lion Feuchtwanger. All three German emigrants were blacklisted in Hollywood as Communists. But when viewers stare at the neon name for ten seconds, as instructed, and then turn to the star next to it, the imprint of the name hangs on as a floater and the prestige of the defamed name is restored through a combination of volition and action. 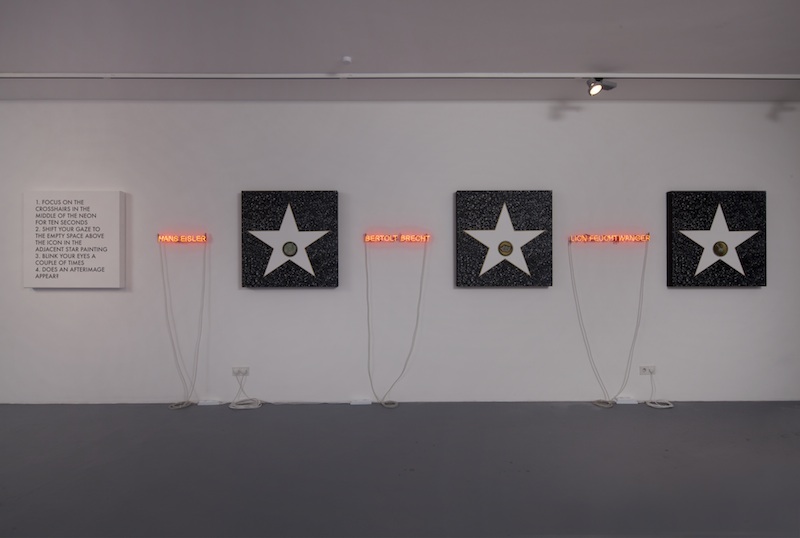 Less well-remembered than McCarthy’s ‘Red Purge’ is ‘The Lavender Scare’. A hysterical, vindictive swipe against ‘suspected homosexuals’ in the US government, it led to mass firings on the basis that gay people were more likely to be Communist sympathisers or blackmail targets, and therefore security risks. In my favourite part of the exhibition, Neidich has filled several vitrines with newspaper articles from the 1950s with such jaw-dropping headlines as ‘Congress Hears 5000 Perverts Infest Capital’ and ‘Are Homosexuals Reds?’ We understand the symbolic power of colours a little better when dealing with past events. This section also serves to undercut the information overload of the installations and videos. Here, Neidich has chosen a specific issue and is educating us on it. 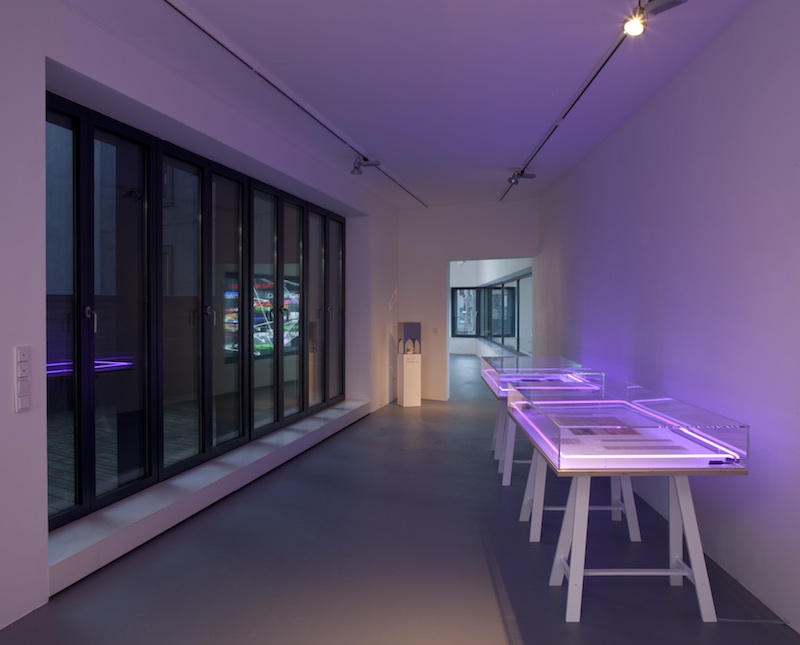 The final vitrine shows five photographs of Roy Cohn, who worked closely with McCarthy on the ‘Red’ and ‘Lavender’ purges, with Donald Trump at different stages in the now-President’s career. This is a canny and interesting move from Neidich, as it triggers a visceral, accusatory response from the viewer. ‘The two were in cahoots!’ I thought triumphantly, before realising that this kind of pasting together of unsubstantiated media is exactly what the artist is critiquing: a self-critical component to a very ambitious exhibition.