We are (of course) not the only ones who have noticed and called out a telling trend in the art scenes we are close to: the tendency of artists, curators, media, and art institutions to mistake appropriation of activist discourse for actual political action, and consequently divert attention, energies and capital away from the real political issues, while centring themselves and being unwilling to acknowledge their own privilege and how they themselves benefit, and often even sustain, inequity. In short, a scramble for the perceived glamour of the political while eschewing hard questions and exempting oneself from critique. The biggest and most financially profitable museums in Berlin, for example, house over half a million stolen cultural artifacts from non-European regions while engaging in ever-inventive ally theatre.

Countless activists have addressed and protested exploitative mechanisms and hypocrisy in the art world. For the last contribution of Artists Without a Cause to Berlin Art Link’s ‘Activism’ series, we chose to interview the group WHEREISANAMENDIETA, whose much-publicized protest actions have brought to the fore many uncomfortable questions, while honouring the exceptional work of Cuban artist Ana Mendieta (1948-1985). 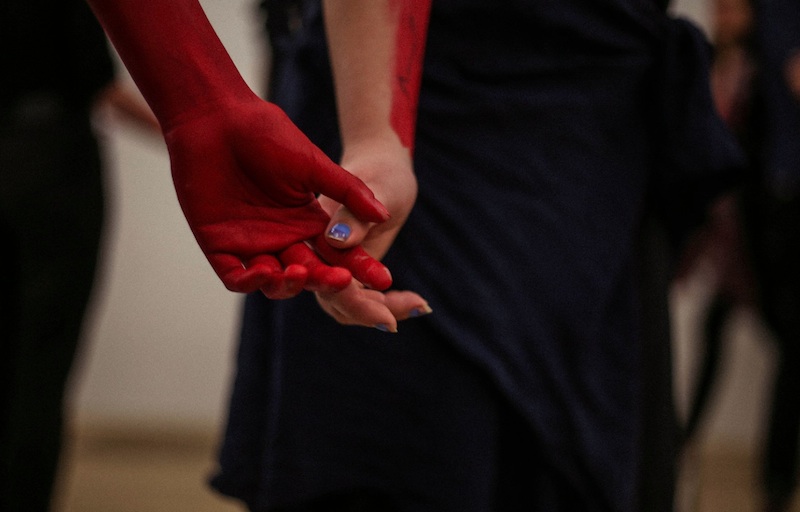 Artists Without a Cause: Could you please introduce yourself and tell us about what your group does? Is it adequate to call it a “group”, or is it more of a “movement”?

WHEREISANAMENDIETA: Our group WHEREISANAMENDIETA is part of a larger, older movement that honours Ana Mendieta and mobilizes around her tragic story and the structural societal conditions, reproduced in the art world, that it is a symptom of. Our group is, specifically, an international collective of people who will not stand for the institutional erasure of women / black and minority ethnic people / trans / non binary people / oppressed and marginalized groups. We demand the acknowledgement of the murder of our sister Ana Mendieta, who was a woman of colour and refugee, at the hands of her husband, minimalist sculptor Carl Andre, in 1985. We denounce the racist and patriarchal art world that worked against her to support her murderer. Andre is but one man on an endless list of names of men whose violent past is systematically eclipsed by their status and privilege, and who continue to be celebrated, while the voices and legacies of their victims are systematically silenced. In the case of Andre, he has enjoyed a successful and lucrative art career since being acquitted, after a highly controversial murder trial based on sloppy police investigation in 1988. During the trial, Mendieta’s art was used as “proof” of alleged mental instability, and key incriminating witness testimony was not used. Still today, Ana Mendieta remains painfully absent, her life and art career brutally cut short. For example, Mendieta’s name was absent from Carl Andre’s blockbuster retrospective at Hamburger Bahnhof last year, in front of which our group staged a protest / mourning action on September 18, 2016. Earlier that year, in June, our group organized a large multi-part protest action at the Tate Modern when it opened its new building and chose to display some of Andre’s work and leave Mendieta’s work from its collection in storage.

Our group is but one part—perhaps the younger generation—of a larger movement protesting this across the board. We are part of the long line of feminist protesters who for over thirty years have been protesting Mendieta’s erasure from the canon and from Andre’s history, and have been publicly remembering this outstanding artist and refusing to let her murder by Andre be forgotten, nor to let the art establishment’s complicity in it go unnoticed.

Our group WHEREISANAMENDIETA is also an archiving project that collects the artworks and writings from artists who are women / non binary / Black and people of colour, as resistance to the erasure of our works and our histories by institutions. The project creates a platform where people can safely create this work without risking institutional backlash or being blacklisted for political involvement. 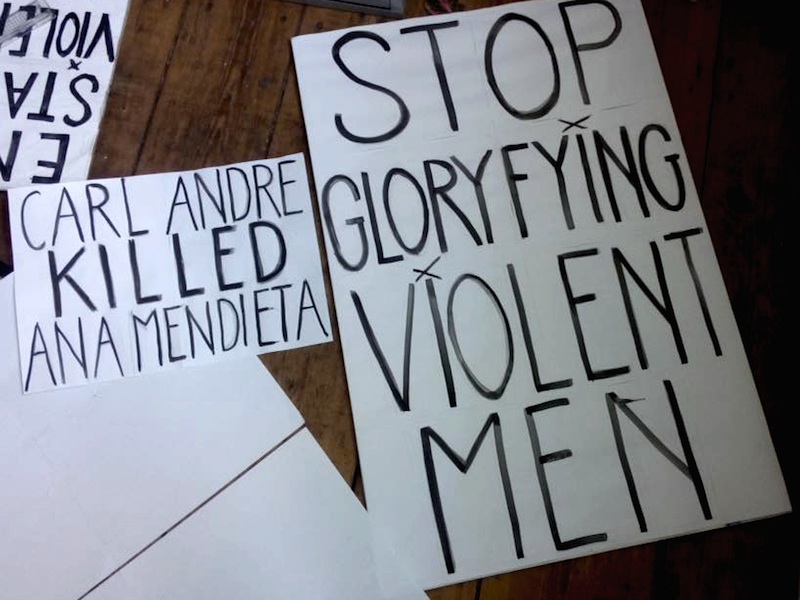 AWAC: Ana Mendieta died in 1984. Your movement asks “Where is Ana Mendieta?”. Why is it important to still ask this question, thirty years after her death?

WIAM: We are not asking singularly for the galleries or institutions to also include her work, but rather “Why is she not here, in 2017?”. This is a difficult question for galleries and institutions to contemplate when they are showing the work of Andre, who would never be the figure he is in the art world today if he had been held truly accountable by the justice system and his peers. The continued erasure of Mendieta’s name and work, on the one hand, and the acclaim offered to Andre, on the other hand, pointedly shows the alliance of institutions to prestigious violent men, who are more celebrated than the people who became victims of their violence. This is not an issue unique to 1985: this injustice continues at all levels in 2017. 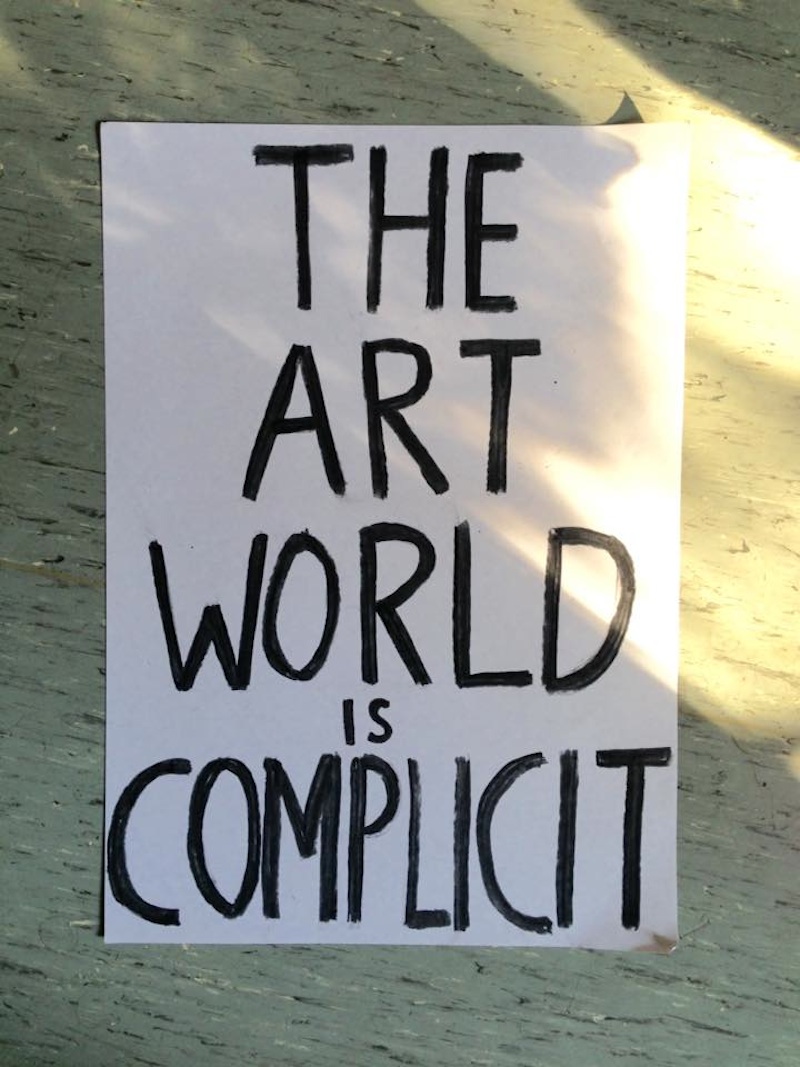 Protest sign “The Art World is Complicit” // Courtesy of WHEREISANAMENDIETA

AWAC: One of the signs you carried at some of your protest actions said “The art world is complicit”. Could you elaborate both in terms of WHEREISANAMENDIETA and the art world in general?

WIAM: This slogan highlights that the case of Ana Mendieta and Carl Andre is symptomatic of dynamics at play in all levels of society, which of course includes the art world, that disproportionately and systematically penalize Black and brown people, and dismisses women/non-binary/trans people, while violent white men get away with few legal consequences for their actions – especially actions like murder and sexual violence against people marginalized by their gender and/or race. It is impossible to ignore the favourable bias that both the legal system and the supposedly progressive art world displayed in the case of Carl Andre.

We must also not forget the art world’s complicity in gentrification (i.e. artwashing) of lower-income and ethnic minority neighbourhoods, which comes at a huge cost for its original inhabitants.

When we look at statistics of who runs the art world, who the biggest players are, who makes the most financial profit and social capital profit, it is not hard to see who this system favours: rich white cis people, overwhelmingly men (which is unsurprising, given who has made the rules and who was formally excluded from it for so long).