On a clear evening in July, I arrived at the south entrance of Tempelhofer Feld, the site at which ‘Unknown Cloud On Its Way To Berlin’— a recent work by Lundahl and Seitl—was about to commence. The project is part of the immersive exhibition ‘Limits of Knowing’ at Martin-Gropius-Bau, yet the location of this work within the public park, which harkens to its past identity as an airport, silently announced itself as a satellite of the historic institution. Visitors are required to download a free smartphone app and show up at the designated time and location. With people wandering around everywhere across the expansive space, it was not initially obvious who was and who wasn’t a participant in the artwork.

Standing, sitting, reclining in anticipation for the participatory work to begin, we eyed each other with curiosity, perhaps even traces of suspicion at what sort of interaction this piece would entail. The content of this work ultimately manifested in the form of our individual experiences, aligning it with the “sensory turn” in contemporary art. This type of artwork usually calls for the artist to integrate strong external stimuli in the form of a high-production installation space. However, the departure from the gallery setting and the relatively simplistic setup signified an inversion of this trend. ‘Unknown Cloud’ relies on the dualism of reality and artifice generated by a temporary community; over its hour-long duration, it was both simulated through our activity and also imagined.

Lundahl and Seitl, ‘Unknown Cloud on Its Way to Berlin,’ performance documentation at Tempelfoher Feld, Berlin // Photo by Sebastian Bolesch

In order to cross the threshold from outsider to insider, participants must listen to the Caretaker app by putting on headphones. Upon doing this, I instantly felt more isolated, an inevitable sensation from the action of blocking out vision or sound. Ethereal voices resembling the hum of a meditational exercise began to filter through; the voice strengthened in palpability as the piece unfolded. Gradually the feeling of isolation diminished. In response to the instructions, people were slowly clustering together into a group formation. Judging by everyone’s body language, the audio was igniting a tension between solitary existence and the occupation of communal space. As we stood in silence holding our devices above our heads, it seemed irrelevant whether you arrived alone or accompanied; you were now a member of a choreographed community. Dissolved into a singular being, it became possible to connect with an alternative geographic realm; the piece has another life in Assam, India and much of the audio comes from recordings taken there. Hearing the recordings provoked reflection on what determines our affiliation with a community, and how far our attachments can extend beyond our immediate surroundings.

As a result of our co-option into this unlikely alliance, the vast plain of Tempelhof was transformed into an unexpectedly intimate setting. Perhaps it is the ritualistic fervour of the piece, which had lured us into involvement with a choreographed community. Coded messages and images flickered across phone screens, yet this visual element became secondary to the whispering audio and the expansive landscape around us. At one point Caretaker told us to close our eyes and place our hands on the ground. Owing to the sensory reduction, the sensation of grassy soil contacting the skin was unexpectedly stimulating. It is interesting how technology created this response to our natural surroundings, a relationship often considered mutually exclusive. While the response was thrilling, it was ultimately the overwhelming sense of belonging that this piece generated, which made involvement in the work so compelling. 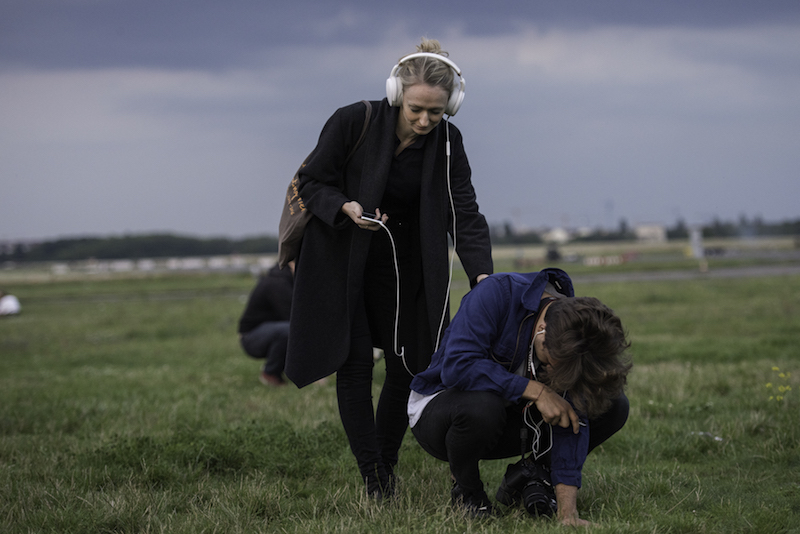 Lundahl and Seitl, ‘Unknown Cloud on Its Way to Berlin,’ performance documentation at Tempelfoher Feld, Berlin // Photo by Sebastian Bolesch

As in much of Lundahl and Seitl’s work, technology is a key component in creating the ‘Unknown Cloud.’ It symbolically announced itself through the mutating glitch visuals on our devices and the robotic delivery of the Caretaker’s vocals, but also alluded to our relationship with it; the name ‘Caretaker’ suggests our unconditional dependence upon electronic apparatus. Yet Martina Seitl told me she hopes that participants will not see the spectacle of technology as the endpoint of the work. She said that it tends to disconnect us from the body and has consequently instilled in us a longing for trust; re-establishing feelings of trust between strangers is ultimately what they are hoping to generate. Smartphone apps are repeatedly blamed by technophobes for the demise of social interaction, but this detachment is challenged within the work. At one stage, reliance upon one another becomes a concrete necessity; a select group of us was told to open our eyes and stand up, only to discover half the group was still kneeling on the ground. We were instructed to each take a kneeling person’s hand and lead them in the direction of the sun. Eventually, it was my turn to be led. Another individual guided me, but in my mind they were reduced to a hand. This disembodiment felt virtuous, and technology was no longer an extension or a stand-in, but transformed us into agents in the piece, by dismantling any desire to exist alone. 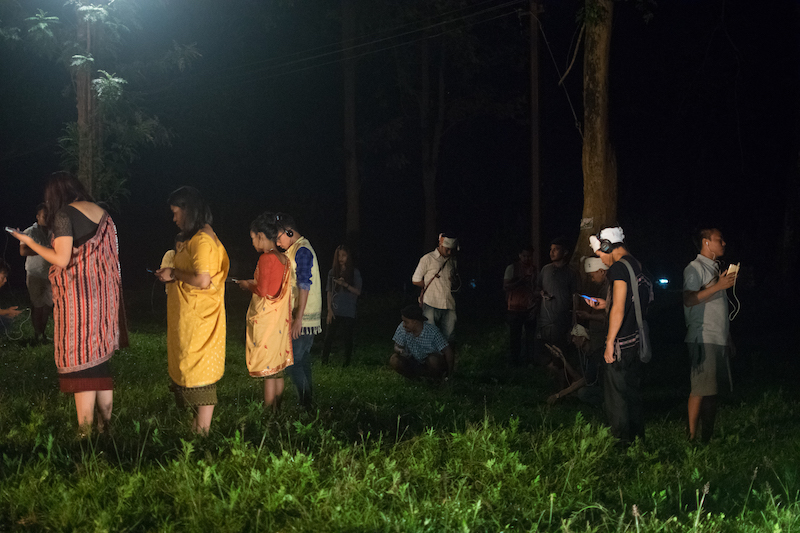 Lundahl and Seitl, ‘Unknown Cloud On Its Way To Berlin,’ Performance documentation from Diphu, India // Photo by Sarlongkiri Ingti

The work is exemplary of the duo’s cross-disciplinary practice, yet what gives the piece vitality is not its skillful technical engineering, but the careful operation of absence. The Caretaker provides us with just enough fictitious elements to grasp our attention, and allows the brain to fill in the rest of the gaps. Of course, embracing technology in this way carries depressing connotations, and the elements of submission may present a skewed power dynamic. Yet, the work is permeated with counteractive fervour against the rhetoric of neo-liberalism that advocates consumption, hyper-individualism and productivity. Partaking in the work, it is clear that the Unknown Cloud necessitates another level of mutual dependence beyond our relationship to each other; we depend on the Cloud for guidance, but the Cloud can only exist if we allow ourselves to believe in it.