Artworks by 50 artists from the United Arab Emirates are on display at me Collectors Room in a survey of contemporary Emirati art that responds to questions of identity, belonging, and heritage. In the foyer of the exhibition space ‘Portrait of a Nation’ sets the tone with works that signify unity, such as a sculpture by Sarah Al Agroobi that combines sand from the seven emirates and next to it Amna Al Dabbagh‘s mirrored map of the country, printed with the various local translations of the word unity. All from the ADMAF collection, the artworks span the last 25 years, with 20 of them having been commissioned for the exhibition’s original showing in Abu Dhabi in 2016. Now showing abroad for the first time, ‘Portrait of a Nation’ invites an outside view into these artists’ reflections on their homeland. 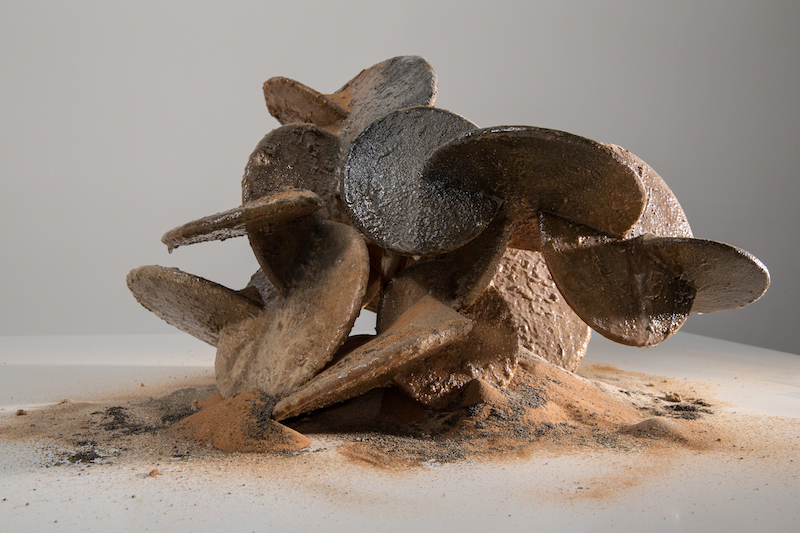 Divided neatly into seven thematic categories, the selection of works offers a broad perspective on what it means to live and work in the country that was founded in 1971 and is home to over 200 nationalities. The section titled ‘Portraiture & Identity’ is where I found the works to be the most captivating and revealing, presenting a range of very personal insights into the exhibition’s overall themes. In his large-scale research project titled ‘Reverse Moments’, displayed here as a collection of objects and photographs, Ammar Al Attar unearths and archives photographs and negatives from studio photography businesses, dating back to the 1960s and through the following decades of post-independence. Along with the photographs, which are themselves artefacts of an era, Attar discovers and shares personal stories of the studio operators and their photographed subjects. Many of these people were immigrants, reflecting the huge expatriate population in the UAE, and making his project a chronicle of both diverse and shared experiences of the country’s urban growth and of notions of belonging.

In three short video works that stand out among mostly photographic and canvas-based works, Karima Al Shomely performs aspects of her personal relationship with the Emirati burqa. The indigo dye from the metallic textile of the burqa is rubbed into her face, it stains her hands while she sews on an old machine, and bleeds when submerged in water. The videos address the traditions and gendered labour that ruled an Emirati woman’s life, and the declining popularity of the burqa in contemporary society. Contrastingly, Sara Al Ahbabi tackles the theme of identity with satire, confronting the cultural stereotypes she has encountered in the UAE with exaggerated clichés. Framed in each photo by glaring studio lights, a man sits drinking tea in an ostentatious living room, surrounded by barrels of oil; a woman picks money from a tree; a man holds a trophy standing above a woman on a podium that reads “The Winning Gender”. Ahbabi’s photo series, ‘Here’s What They Think of Me?’, 2016—strangely located in the ‘Architecture & Urbanism’ section of the exhibition—is one of the more confrontational works in the exhibition, asking the viewer to think about how they relate to these versions of perceived Emirati identity. 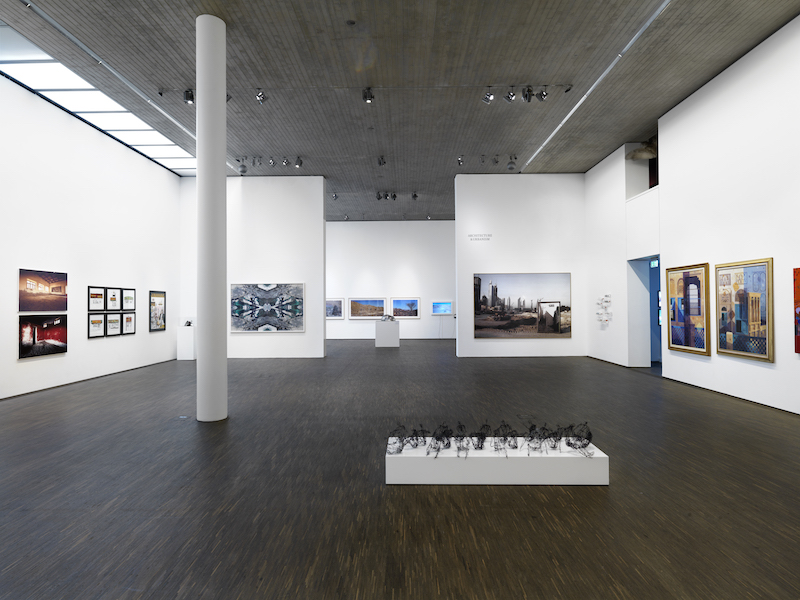 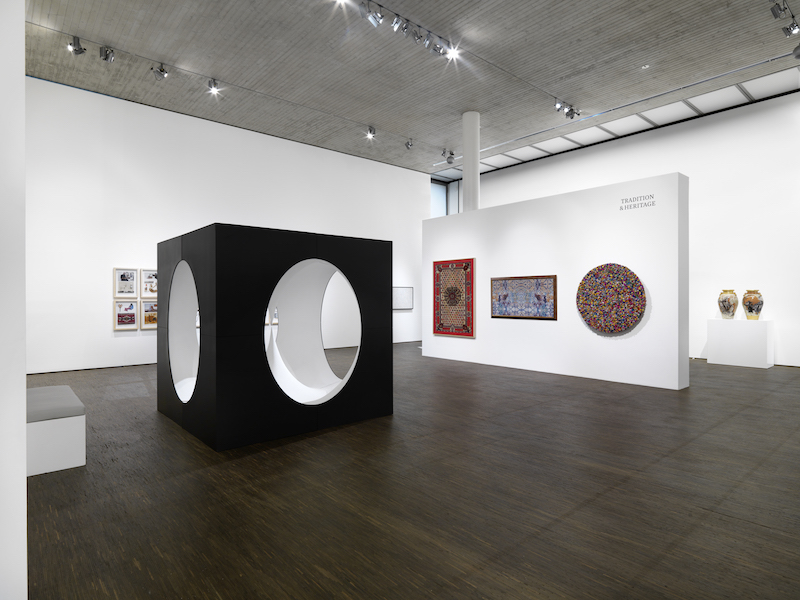 Elsewhere in the exhibition, landscape, language, religion, and cultural traditions are drawn on by the artists to describe their connections to their country. Many works involve the re-working or re-contextualising of traditional crafts and textiles, introducing domestic elements of everyday life and heritage. Overall, ‘Portrait of a Nation’ communicates a feeling of a region that has undergone dramatic changes in recent history, with a sense of vast urban growth underpinning the selection of works. A huge composite photograph by Zeinab Al Hashemi, ‘Coast Collision’, documents this urban transformation with a satellite view of Abu Dhabi, spliced and repeated like a kaleidoscope. The result is a transfixing image that from far away resembles the patterns of an ornate rug and from up close reveals a densely developed coastline that goes on and on, infinitely. 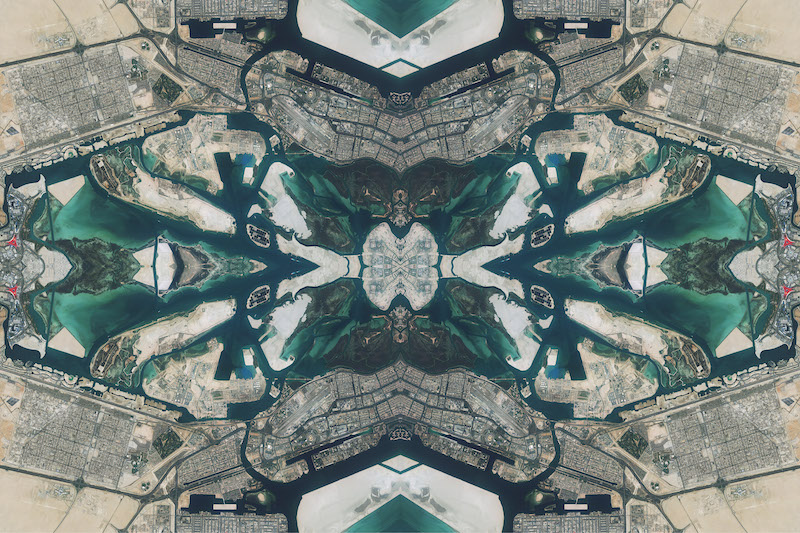 A travelling presentation of artworks selected for their single country of origin is not something you often see in contemporary art institutions anymore, which raises the question: is this a nationalist exhibition? And, where does a nationalistic curatorial position fit in today’s global art scene? The exhibition’s national survey approach and the museum exhibit-style categories, make for a rather traditional viewing experience, contrasted by the addition of a smartphone app showing videos of the commissioned artists, oddly mixing conventional museum presentation with new media and assuming a tech savviness from the visitor, which the works themselves do not demand. However, on an individual scale many of the works speak loudly with their own rich perspectives, stories and contexts, providing an insight into the practices and preoccupations of a part of the art world otherwise not well-represented here in Germany.