Hamburger Bahnhof has long been a site of intersection between people and worldviews; in its previous life as a 19th century train station, the venue served as a bustling junction of innovative technologies, travellers, and ideas. Today, under the umbrella of contemporary art, pioneers and perspectives collide in an amalgam of salsa lessons, talking suns, 1394 B.C. limestone, and plaster elbows. While some artists excel, others crash.

Every other year, an exhibition unites the four finalists for the Preis der Nationalgalerie, one of the highest achievements for Berlin-based contemporary artists under forty, who have taken a strong foothold in the city. The prize’s weight is tangible: following her win of the most-recent Preis der Nationalgalerie, Anne Imhof was selected to represent Germany in this year’s Venice Biennale. The 2017 nominees are Sol Calero (b. 1982, Caracas), Agnieszka Polska (b. 1985, Lublin), Iman Issa (b. 1979, Cairo), and Jumana Manna (b. 1987, Princeton). For the first time, all the finalists are women, and none is German. Amidst an unprecedented range of artists and modes of representation, a timely current of global hybridity and identity politics flows throughout the exhibition. 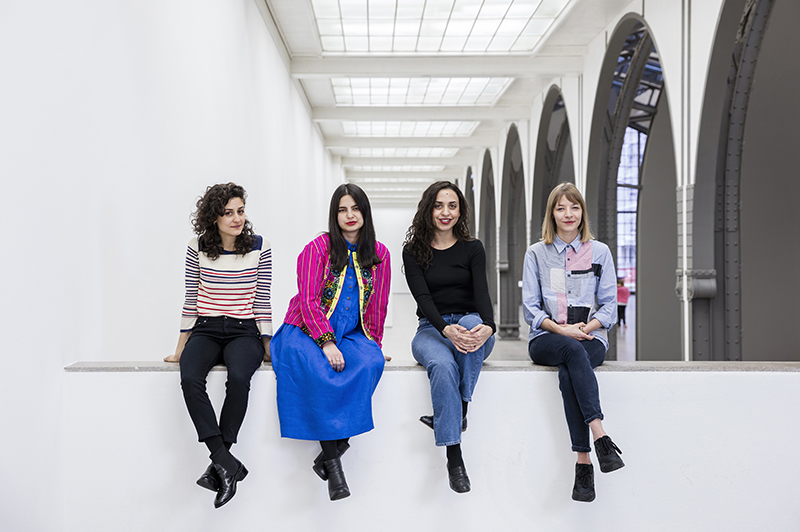 By far the most ambitious project, Sol Calero’s vibrant installation, ‘Amazonas Shopping Center’, provides a mini-retrospective, one-stop-shop of several of her recent projects and includes a nail salon, salsa studio, cybercafé, travel agency, currency exchange, and cinema. Venezuelan-born Calero studied in Spain and Great Britain before moving to Berlin and describes herself as an “immigrant who has lost her identity and is looking for it”. In this vein, viewers themselves get lost amidst her labyrinth of spaces and experiences. Calero recreates our daily world, infusing it with Latin bubble-gum pop in an immersive installation that probes these sites of cultural exchange and identity.

One of the most exciting components of her exhibition, ‘Casa de Cambio’ serves as a currency exchange booth in which the audience engages with “officials” to exchange their own currency for Calero’s. With fluctuating rates of exchange, the viewer may opt to receive a wad of 50 bills, 49 of which are blank, with one signed original drawing by the artist. Calero layers a seemingly banal interaction—a trip to the currency exchange—with commentary on hyperinflation in Venezuela, the local-global nexus, and the commodity of the artist’s ‘original’.

Calero could not pack more into this exhibition unless she used the ceiling. With her signature, graphic style of juicy colors, she decorates participatory sites for reflection. ‘Bienvenidos a Nuevo Estilo’, a hair salon, and ‘La Escuela del Sur’, a classroom, question the sources of our information and power-dynamics of exchange. Calero grapples with “self-exoticization” and the systems that engender Latin American stereotypes and cultural tropes. At their best these settings demand self-reflection, but they do not always provide viewers with a clear direction; occasionally you may feel like an actor on a stage in a play in which you don’t know your lines. While critics most frequently link Calero to Henri Matisse for the vibrant, organic forms of her paintings, this flattens the social implications of her work; the elevation of everyday sites and cultural tropes to investigate minoritarian identity are far more in dialogue with artists like Nari Ward.

If Sol Calero’s installation makes us rethink our world from within, Agnieszka Polska’s animated films make us rethink it from above. Polska exhibits two interrelated films of an anthropomorphized sun, whose critical, half-sung monologue narrates the current condition of our existence. In ‘What the Sun Has Seen’, the protagonist shines far above us, but its glaring human eyes are privy to all happening down below. Polska’s paradox is that the sun is both an innocent witness and a contributor to the chaos, recalling the phenomenon in which the observer influences that which is observed. By giving the sun human features, Polska charges us to consider our own social, environmental, and political complicity in a video infused with both comedy and quantum mechanics.

Polska takes an almost opposite approach from Calero, employing a dark, bare room for her films. The sun, a surrogate for ourselves, serves as both an elegy and a call to action. However, some viewers may find the straightforwardness of Polska’s visuals simplistic, in contrast to their philosophy-heavy rhetoric. Embedded with references to Walter Benjamin‘s ‘Angel of History’, the sun’s omniscient perspective tackles fundamental questions of phenomenology and the fragility of human life.

The exhibition falls flat with works from Iman Issa’s ‘Heritage Studies’ series. While Polska looks at strategies of investigating and observing the passage of time, Issa fudges a temporality. Issa creates a series of sculptures that recall historical artworks listed in corresponding vinyl wall text, citing objects like Scarabs from Dynasty XVIII in The International Museum of Ancient Arts and Culture Collection. Her sculptures bear no visual resemblance to the original objects; rather, Issa purports an inner connection that she describes as “mental prints”. The only correlation remains in her mind. The lack of visual reference for the textual referent does not allow us to interpret the change that has occurred and understand the gravity of the artistic act. This undermines the vitality of the objects themselves – all decisions we can interpret become formal, and not political. One cannot help but think of Walid Raad‘s ‘Preface to the Third Edition’ series, in which he creates hybrid forms of objects from the Louvre’s Islamic Arts Department; however, Raad leaves us visual clues to understand his changes and interpret the objects as proxies for identity, while Issa’s works feel more like minimalist sculpture.

Juamana Manna’s sculptures are not much more convincing; reminiscent of an “archaeological dig or unfinished construction site,” they feel more like an unfinished idea. Ambiguous body parts, architectural infrastructure, and plaster mush together in a confused synthesis of form. However, Manna redeems herself in her documentary-style film in which she strikes a balance of sonic and visual poetry, making the objects feel superfluous.

‘A Magical Substance Flows Into Me’ traces Jewish-German ethnomusicologist Robert Lachmann‘s radio program that aired on the Palestine Broadcasting Service from 1936-37. A Palestinian raised in Israel, Manna interweaves the performances, families and stories from Lachmann’s communities with scenes of her own home and family. The personal and political intertwine in shared songs and conversations. Throughout a series of performances, we compare the craft of a handmade instrument to the strain of an iPhone recording; her film manifests the intersection of technology and tradition through music. This serves as a soundtrack to the religious and political conflict in the film, exploring the cultural boundaries of physically separate communities. In Manna’s film, the complexity of identity and instrument, for artist and subject, counteracts a singularity proposed by the Zionist project.

Overall, the exhibition celebrates the diversity of media through which some of Berlin’s top contemporary artists approach cultural, environmental and geo-political issues. The artists will all appear for an Artist Talk at 7pm on Thursday, October 12, 2017 in the Aktionsraum at Hamburger Bahnhof. The following week on October 20, 2017, a second jury will meet to decide and announce the winner, who will receive a 2018 solo exhibition in one of the Nationalgalerie’s locations.