“Is this really your studio?” is a curious question that comes to mind when visiting photographer Tobias Zielony’s physical studio space, which is close to Check Point Charlie, major museums and editorial offices of German newspapers. Among his artistic documentation of refugee protests, Zielony is also known for his inquiries into youth cultures across the globe from East to West Germany, the United States, and behind the scenes of the modes of resistance of Kiev’s LGBTQI techno community, which is currently on view at KOW gallery. In this most recent series. ‘Maskirovka’, the club unveils a space for revolution and identity politics in the face of Ukraine’s war. From the club to the square (Maidan) to the parking lot, it would seem Zielony’s studio practice is defined by being in the field, in movement and on a roll, his camera in his backpack. 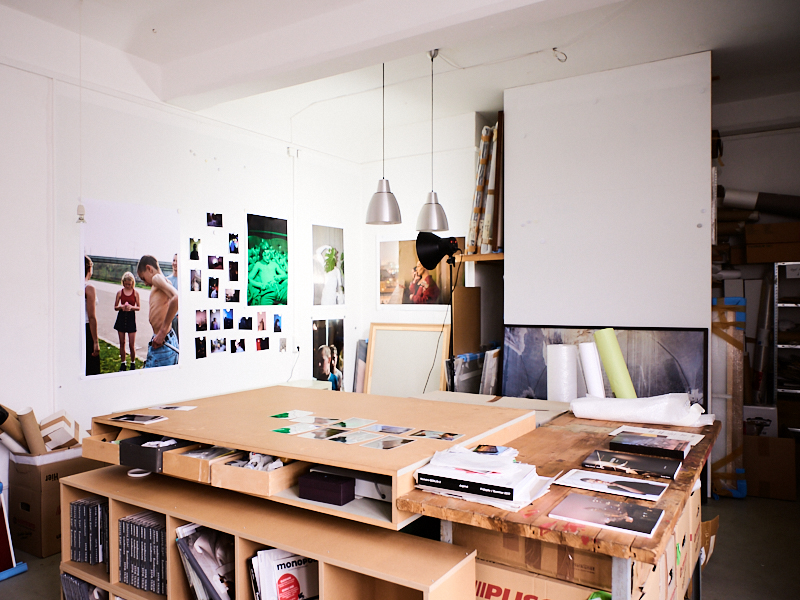 Having just returned from a shoot with actors from the Kammerspiele in Munich, Zielony glides into the courtyard of his studio complex by bike and then walks up what feels like five flights of steep stairs to work. Coffee breaks at the little family-style Italian joint across the street are not a procrastination option once you are up here, high above the ground.

Once inside, he admits, “I am not here that much, so I am not claiming much space,” while pointing at some of his studio mate’s work. Johanna Diehl’s photographs of Ukrainian synagogues stand framed, clad in bubble-wrap against the wall. In the northwest corner of the humble sun-lit room, a miniature exhibition of Zielony’s current show is pinned to the walls via magnets. Photo spotlights stand at attention. 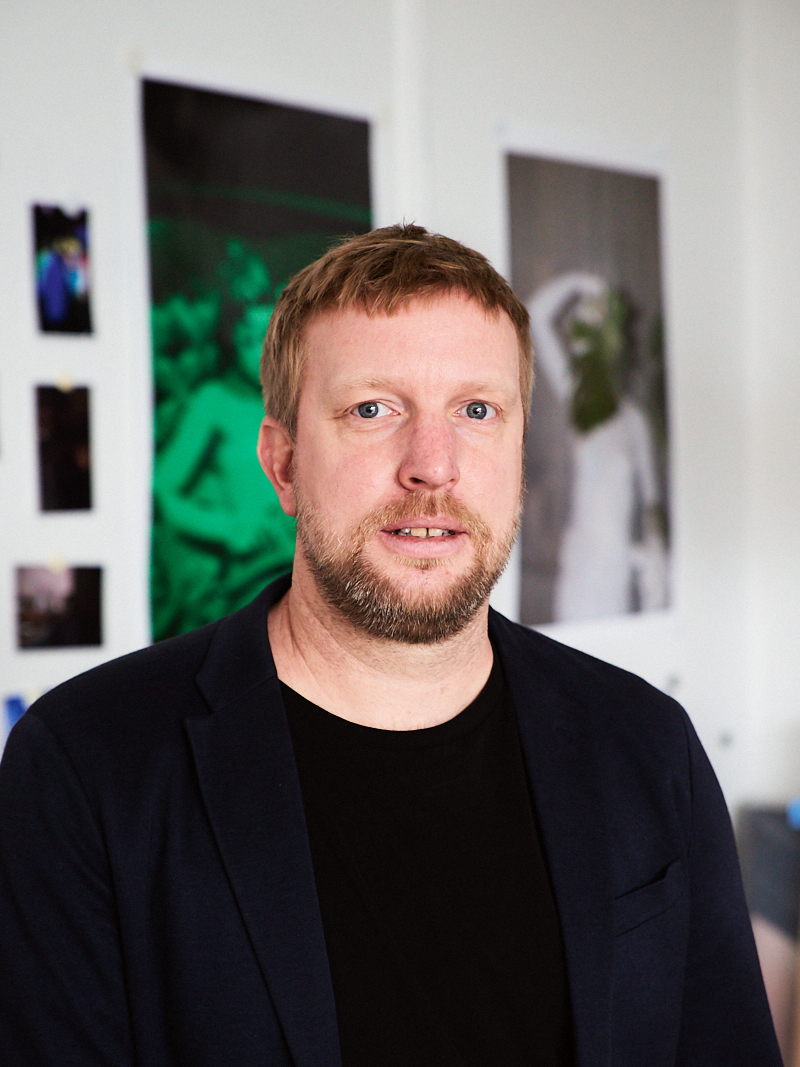 A big table acting as the centerpiece of the room is where Zielony creates the narratives and sequences that order his photographic series. He has prepared a pile of photographs from his archive, including recent and older prints from the early 2000s, which were exhibited at the Gorki Theater’s Herbst Salon and the Kunsthalle Wuppertal. “They look like they come from Rossmann pharmacy,” he jokes, commenting on the analogue patina and 10×15 cm format of the images strewn out on the table. He shuffles the images, performing how he makes his aesthetic decisions. It’s similar to watching a painter place paint on a canvas: Are the colors too similar? Too many dark colors? Not too many portraits next to each other. Too monochrome? He explains the haphazard logic: “Some people say to kill your darlings, I never do that. It’s more a cloud than a narrative.” In this way, his studio is not a lab; it serves to facilitate discussion and as a kind of experimental show-room to compare surfaces from matte test prints to glossy final results. 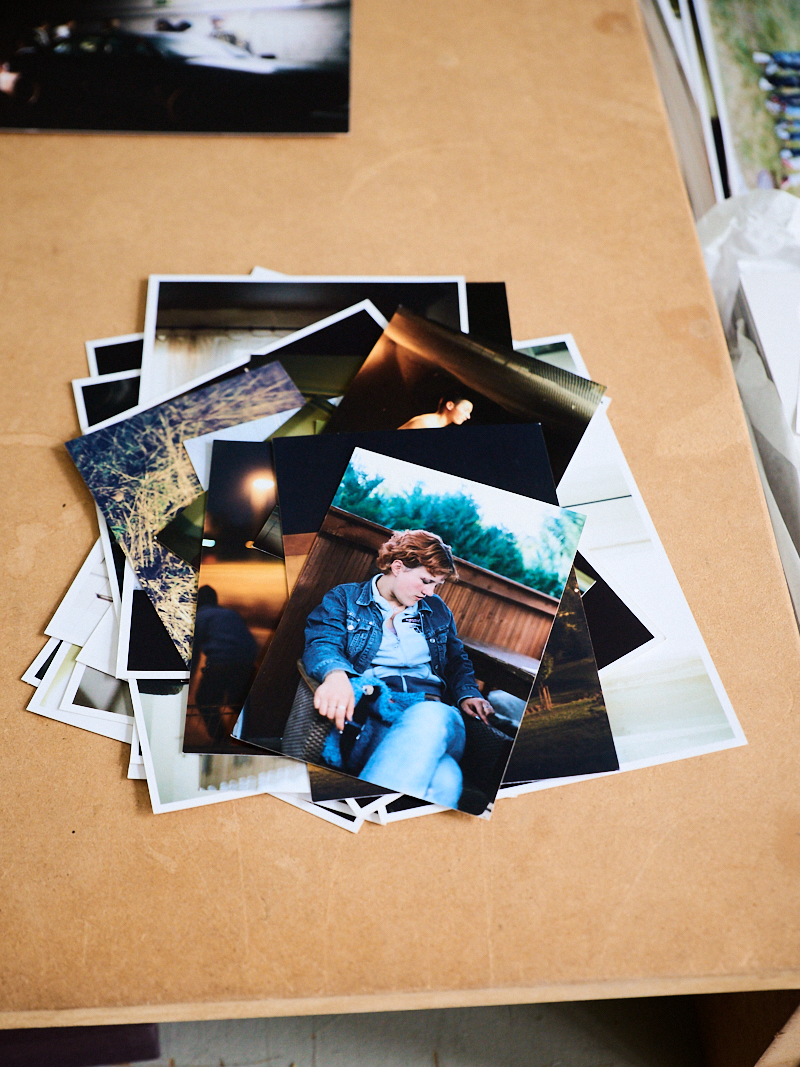 If the world is Zielony’s studio, he thinks of it as a stage. The public spaces, club atmospheres and intimate close-ups of subjects in ‘Maskirovka’ come into focus, shaped by darkness against opaque backgrounds. Regarding the youth cultures he has depicted over the years, these kids make their own places. Collecting in groups, at fences, in car parks, at malls, at gas stations, they create non-institutionalized spaces. They define their own zones as counter-movements against a repressive, outside society. What they share is fashion, music, and the good fight. Out of context and on the studio table, all these groups seem to be ready for battle. In one image from Kiev, a girl named Anastasia dances with clenched fists, glitter war paint on her lashes. In another picture, a boy from East Germany in the early 2000s wears a Böse Onkels patch on his shirt and mirrors a similar arms-up pose for the camera. “Though it’s close to consumer culture, they are trying to grasp and ‘overpaint’ what you are supposed to see,” Zielony says. “Like body piercings, tattoos and these tribal aspects, these rituals are more in a pop culture context. Same as graffiti-you don’t change the structure of the city, it’s more the surface.” 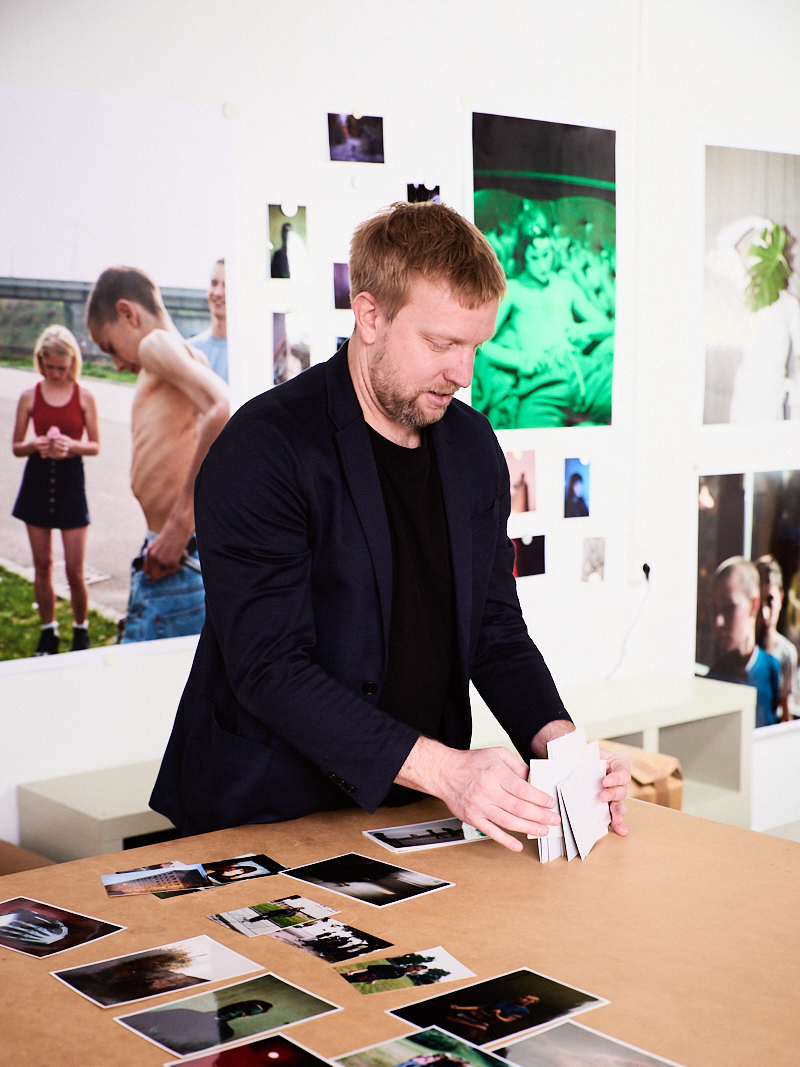 On this platform, Zielony is very aware of his own role as a photographer and a catalyst. Sometimes sparking narratives, observing or seemingly staged, it’s almost like these kids were waiting for him to turn up and release the shutter. Yet even though he gets close-up to his subjects, there are boundaries. “It’s not like I am their best friend. You have to live up to that. If you pretend to be the gang member then you also have to be the gang member,” he elucidates on his position. Zielony goes on to muse about the shift in self-awareness these young people now exude since the invention of selfies and camera phones. Every image is a present view into a different flavor of youthful nostalgia, fantastical and political hedonism and languid anticipation. 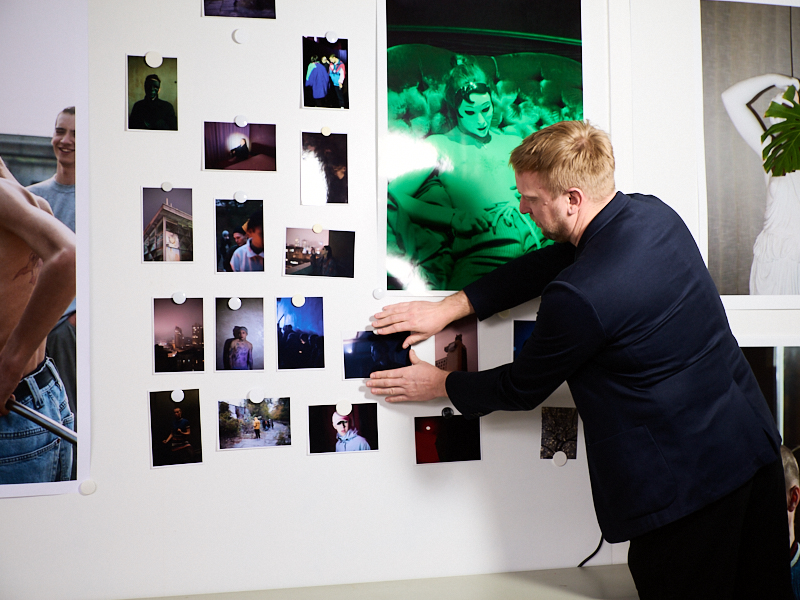 Zielony’s studio in Berlin is a passport to armchair travel. A show and tell, he jovially pulls out a grey archival box and casually adds some newspapers to the table’s surface. The newspaper shows refugee testimonials and portraits, made for the German Venice Biennale Pavilion in 2015. “I’m not a photo journalist,” he almost vehemently states. Even though some of his photographs of refugee protests in Germany were printed on the pages of THE CITIZEN – a newspaper distributed in Ghana, Nigeria, and Uganda – he saw this as an experimental zone. This was a way of making his photographs accessible to a public outside of the art space and was an active confrontation with questions around censorship and global activism. He does not feel the need to answer the where-why-when questions, which often overpower narratives in journalism. His work deals more with the investigation of photography as a medium in itself. This liminal relationship of reality and fiction is often a matter of perception and friction. In our current news culture, Zielony as an artist may actually be a more reliable source, tracing the emotive vibes and contexts central to the struggles that form a young citizen’s rights, identity and sense of freedom.