The phrase “the personal is political” is familiar, even cliché, and it is clear enough that in an age in which personal civil liberties are being eroded by repressive governments, where historically oppressed groups face new forms of violence to support the same old hierarchies, and where more and more of our lives are recorded, commodified and interchanged, individual decisions and identities are the subject of greater political scrutiny than ever before. Resistance, therefore, must have as much of a personal as policy-based dimension. Viewing KW Institute for Contemporary Art‘s Lynn Hershmann Leeson retrospective, ‘First Person Plural,’ the following question arose: If “the personal is political” is increasingly self-evident as a concept, what about the converse? Is it true that the political is also personal? It seems increasingly true that politics are more and more impersonal, focused on responding to behaviors as much as individual needs. 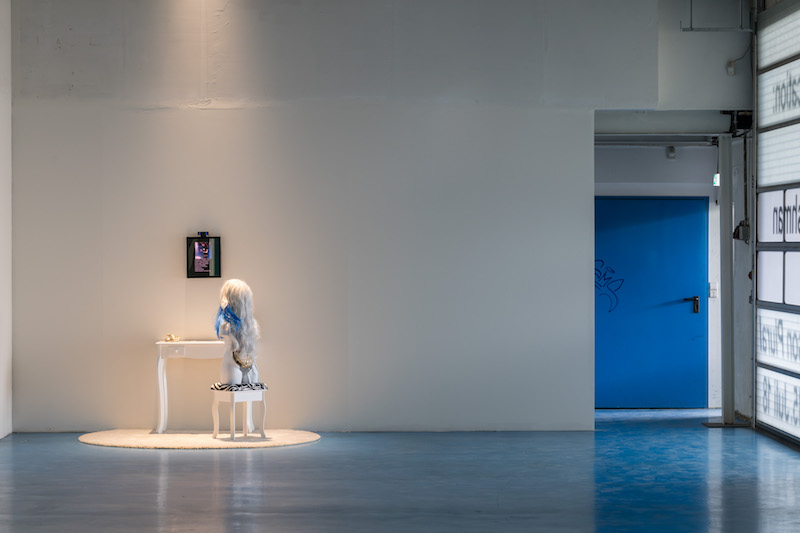 The work that brought this question to the forefront of my mind was Hershman Leeson’s ‘Venus of the Anthropocene’ (2017), which employs facial recognition software alongside a display that includes the ephemera of intimacies—a wig, a dressing table, a medicine bottle—all of which are familiar tropes of Hershman Leeson’s work. A black screen evokes the notion of a mirror, but the reflection goes only one way; it captures a version of the visitor and ostensibly fits them into a matrix of characteristics which it then displays. The mirror responds to the viewer but on its own terms. Although each object in the installation could be said to have both personal and political dimensions, the inclusion of facial recognition technology seems to force questions about agency, representation and control to the fore: if consumer technologies are more invasive and personalized than ever, and they ultimately exist to provide corporations or political entities with more data to exploit, what meaning can actually be found in the personal character of this information? Is the collective data of individuals a means of creating an aggregation that is a “person” but not in the familiar meaning of the term? A being who is merely a set of characteristics, stripped of personality, emptied of beliefs, goals and ideologies, the ultimate aim of whose construction is making politics simply about outcomes? Hershman Leeson’s mirror analyzes its viewer and churns out a new entity ready to market and be marketed. 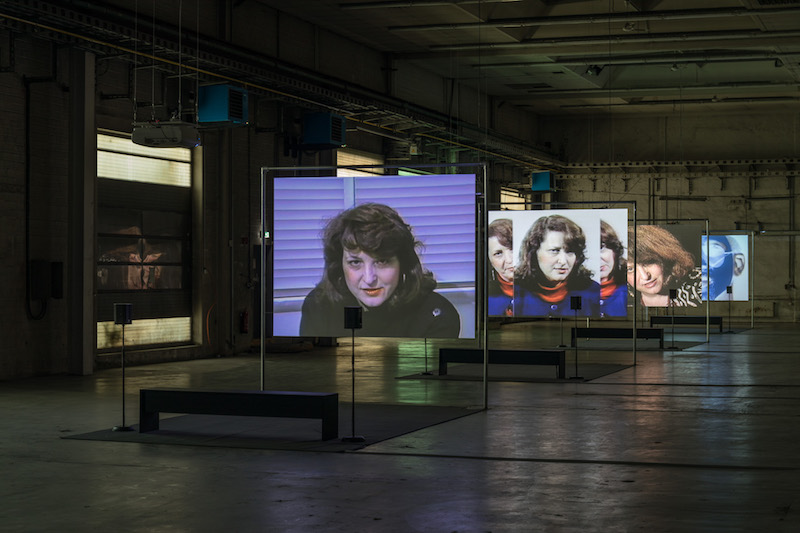 The management and control of identity, and the distribution of personality and agency, have been subjects of Hershman Leeson’s work since she began making “videotapes” more than four decades ago, and ‘First Person Plural’ does an excellent job of drawing connections between the earlier and later works, highlighting the ways in which Hershman Leeson has evolved in order to remain the same artist with the same set of concerns. The first room of the exhibition, housed in an abandoned warehouse complex near the Moritzplatz U-Bahn station, is oddly homely, emphasizing the ways in which technologies and personalities interact. Hershman Leeson deftly explores the ways in which agency is often subsumed within the deceptive performance of “making choices.” In the Cold War America of Hershman Leeson’s earlier works, for example, the ability to make choices, particularly consumer choices, was a way of distinguishing Western societies from those behind the Iron Curtain: Communist populations were passive victims with no control over their own lives; the “government” made the decisions for its people. In the West, citizens controlled their own lives. Of course they did.

‘Lorna’ (1979–82) is perhaps the work on view which explores this complex network of relations most deeply. The visitor is invited to sit in the constructed living room of a house—not a doll’s house, exactly, but certainly not the property of a person who makes her own choices or who has control over her own life; indeed, random strangers can walk in at any time and begin using the furniture. A retro television plays a video in which a mournful country western vocal sets the mood for a character named Lorna whose name foreshadows her forlorn narrative, one entirely beyond her control. Hers is not only a scripted narrative, but one that is also controlled literally from a distance: the viewer uses a remote control to select particular objects on screen, as a way to move the narrative forward, compelling Lorna into particular outcomes by means of the objects she possesses, or which possess her. 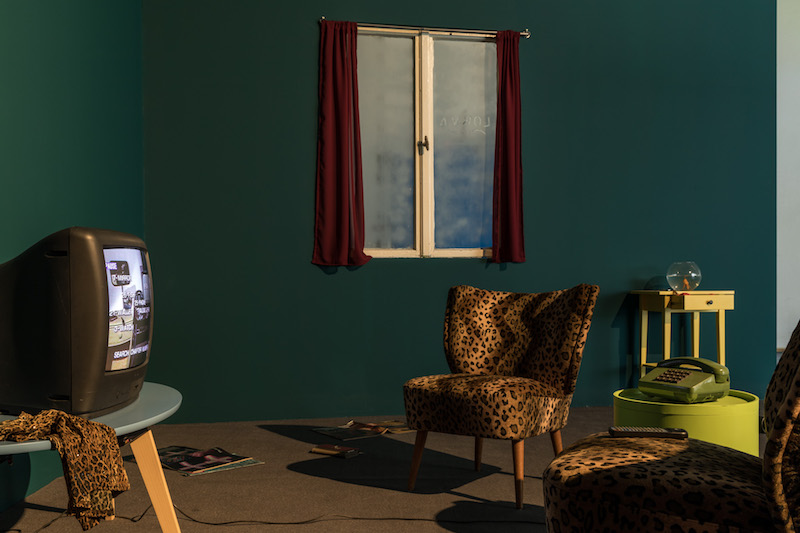 In the adjacent space, a selection of Hershman Leeson’s videos play on a serried line of four televisions and on four screens set one behind the other, each with a small bench and speakers on either side. The televisions screen works from the 1970s, including ‘A Commercial for Myself’ (1978) in which various individuals cheerily (or eerily, as the case may be) announce themselves to be “Lynn Hershman” and invite the viewer to “come and see me” at various spaces, including the Plaza Hotel and the Chelsea Hotel. Hershman’s interest in the ways in which technology—even the relatively primitive media technologies of 1978—permit an individual to distribute and redefine (or satirize) one’s identity, and the ways in which technologies make the people displayed on screens and in programs “available” to others, feels exceptionally current. The frequent references to hotels in this work, as well as the inclusion of ‘Dante Hotel’ (1972–73), which takes its title from Hershman Leeson’s immersive installation of the same name, bespeak the artist’s enduring interest in these sites of temporary shelter. They are locations where identity can be performed, shed or almost completely ignored.

With a similar function to that of ‘The Dante Hotel’ and simultaneous with ‘First Person Plural’ is an installation at the Novalis Hotel in central Berlin, where visitors can enter a room, not unlike Lorna’s but where the dynamics of control have a somewhat different valance. The visitors to the Novalis, in addition to picking through the ephemera of the life of Hershman Lesson’s invented character, Roberta Lester, can have their own DNA sampled upon arrival. The samples are then given further analysis and the results are to be discussed by Hershman Leeson and the scientist Lutz Roewer at a presentation concluding the installation. The politics of the personal could scarcely be more intimate; ‘The Novalis Hotel’ provides yet another site of interface between the information we provide to the world and the narrative it constructs about us. Only the story that comes back is one that we may not recognize. 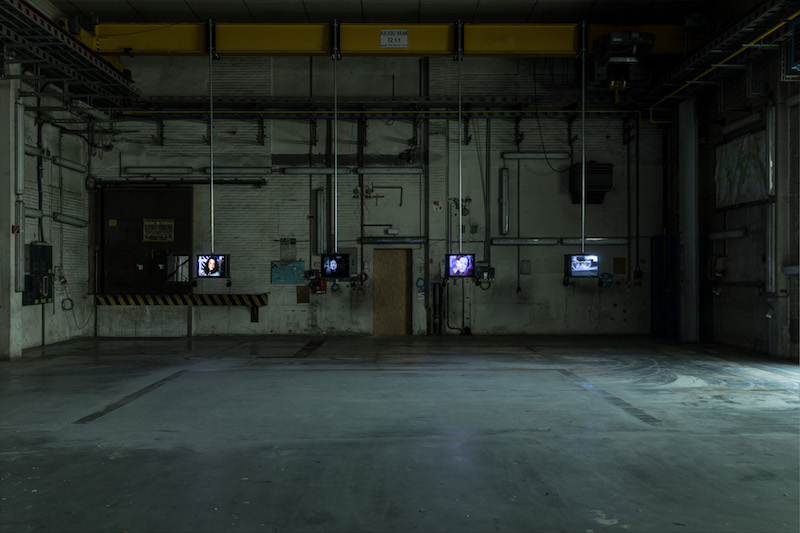